The President of Uganda Yoweri Kaguta Museveni has ordered Bank of Uganda Governor Emmanuel Mutebile to expenditiously investigate the sale of Simbamanyo House and Afrique Suites by Equity Bank and report to him within one week.

The president came in after Mr Peter Kamya and Margaret Muganwa appealed for his intervention.

According to the president, whereas, Bank of Uganda directed that there should be no foreclosure of mortgaged properties by Banks during the COVID-19 pandemic, Equity Bank went ahead and sold their properties at very low prices. That they had even offered to get their own buyers but all their attempts were frustrated.

Below is a full statement..

CLAIMS OF ILLEGAL SALE OF SIMBAMANYO HOUSE AND AFRIQUE SUITES
Mr. Peter Kamya and Dr. Margaret Muganwa have appealed for my intervention in matters regarding the sale of Sibamanyo House and Afrique suites by Equity Bank.

They state that, whereas, Bank of Uganda directed that there should be no foreclosure of mortgaged properties by Banks during the COVID-19 pandemic, Equity Bank went ahead and sold their properties at very low prices.

That they had even offered to get their own buyers but all their attempts were frustrated.

This is, therefore, to direct that you expeditiously investigate the matter and report back within one week. 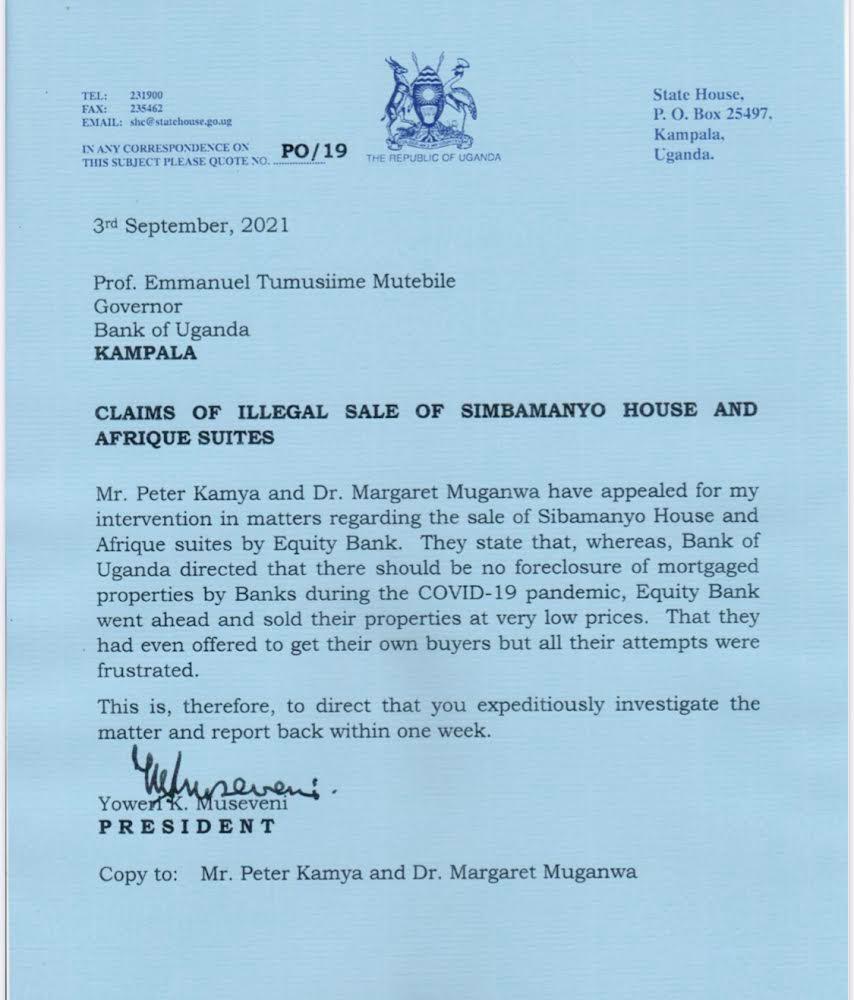 In August this year, former owners of Simbamanyo Estates lost an appeal for the third time in which he sought to recover a multibillion city building and a hotel from Equity Bank Uganda Limited.

The bank seized Simbamanyo House and Afrique Suits Hotel on Mutungo Hill in Kampala last year after city tycoon Peter Kamya and his Simbamanyo Estates allegedly failed to pay outstanding loans to a tune of $10.8m (about Shs40 billion).

The properties include Simbamanyo building on Lumumba Avenue, which the bank auctioned to Meera Investments Limited last year, and Afrique Suites Hotel located in Mutungo Hill, Nakawa Division, Kampala, which was auctioned to Luwaluwa Investments.
“In the result, I find that this appeal is incompetent and not proper before this honourable court as the defective affidavits render the appeal incompetent. Appeal number 3 of 2021 for setting aside the orders of the registrar are dismissed,” ruled Justice Abinyo.
“Accordingly, the preliminary objection on a point of law by the respondents is upheld,” she added

Prior to the delivery of the ruling, Simbamanyo Estates lawyers Muwema & Co. Advocates, had on July 26, written to the court demanding that the ruling be delivered without delay.

The lawyers claimed that Meera Investments had asked the commissioner of Land  Registration to remove the caveat issued under the abated orders by the registrar.

Further, the lawyers claimed that as they waited for the Friday ruling, they learnt that Luwaluwa Investments was planning to sale Afrique Suits Hotel before the determination of their appeal.

When the bank sold the building and hotel after the loans went bad, Simbamanyo proprietors ran to court in 2020, seeking to stop the sale and recover the properties.

The tycoon first withdrew the case and later returned to court in February this year seeking to reinstate the case.

Court then ruled that he was out of time. The tycoon again appealed the decision, challenging the ruling.

The aforementioned prime properties were guaranteed to Equity Bank Uganda as security by Simbamanyo Estates in a bid to secure a $10.8m loan in November 2017.

Along the way, Simbamanyo Estates allegedly defaulted on its loan repayments, prompting Equity Bank to devise means of recovering its money.

Subsequently, on August 7 and August 11 last year, the bank advertised the sale of the two properties by way of public auction, which were bought by Meera Investments and Luwaluwa Investments respectively.