Commander of Land Forces of the Uganda People’s Defence Forces (UPDF) Lt. Gen. Muhoozi Kainerugaba has returned to Kampala from a successful trip to Kigali, where he held talks with Rwanda President Paul Kagame.

“We held very cordial and in-depth discussions about how to improve our bilateral relations. I’m confident that under the leadership of our two Presidents we shall be able to quickly restore our historical good relations,” Muhoozi said.

He also returned with a Ugandan Special Forces (SFC) soldier who had been held by Rwanda.

“I further thank President Kagame for honouring my request to release our SFC soldier, Private Ronald Arinda, who strayed into Rwandan territory on personal business without permission. I returned with him tonight to Uganda. Long-live the friendship of the two countries,” Muhoozi added. 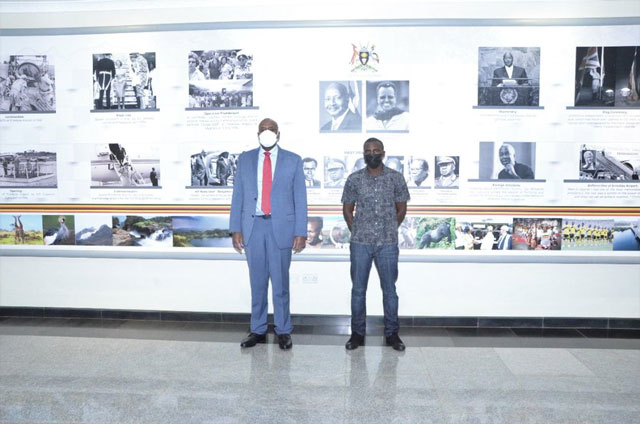 Muhoozi with the SFC soldier (Right) released by Rwanda today.

Rwanda, in a statement from the Presidency, said “President Kagame and General Muhoozi had cordial, productive and forward looking discussions about Rwanda’s concerns and practical steps needed to restore the relationship between Rwanda and Uganda.”

The visit comes days after Uganda’s Permanent Representative of Uganda to the United Nations Amb. Adonia Ayebare delivered a special message to Kigali in continued efforts to mend relations with Rwanda continued today.

It is now two years ago since the presidents of Rwanda Kagame and Uganda Yoweri Museveni signed an agreement in Angola to ease tensions after the two leaders exchanged accusations of spying, political assassinations and meddling. Rwanda months earlier closed the border.

Since then, there has been slow progress on the actual return of normalcy especially the opening of the Gatuna border which the Kigali administration closed in February 2019.