Police in Mbarara City Central Division and National Drug Authority(NDA) in an intelligence led operation have arrested two suspects identified as Sunday Dawin and Bob Jones for allegedly being behind printing and issuing of forged academic documents for nursing students and fake NDA licenses to operate drug shops in Western Uganda. 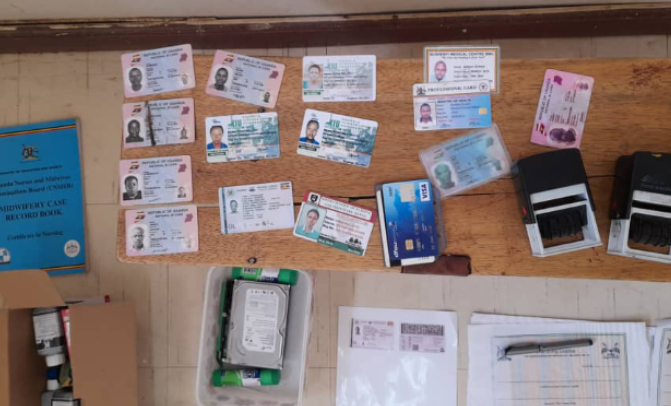 The two suspected were nabbed on 21/05/2022 all from Ishaka cell B Ishaka ward Bushenyi Ishaka Municipality.

According to Rwizi region police spokesperson Kasasira Samson revealed that on arrest the two were found in possession of fake stamps,certificates of enrolment and seals of different nursing institutions in the country and the Uganda Nurses and Midwives Council that they were using to approve nursing students as medical practitioners.

In the same regard Police is also holding Akankwasa Christbelle for being found in possession of a forgeried NDA license to operate a drug shop in Mbarara City issued to her by Sunday Dawin in the names of Akankwasa Chris.

“As Police,we caution members of the public to always deal with National Drug Authority on matters of certification of licenses and institutions certified and approved by Ministry of Education and Sports to avoid fraudsters”,he said.

ASP Kasasira stressed that after the investigations,the arrested persons will be produced in courts of law on charges of forgery.