Several officials at the Kampala Capital City Authority (KCCA), are in deep trouble for allegedly swindling over Shs 8 billions in guise of renovation of Old Taxi Park.

These are also under fire for defying a Court Order and using this Covid-19 Lockdown to enter a consent judgement between the developers led by Ahabwe Transporters and other Eleven companies who have tittles surrounding the peripheral of the Old Taxi Park.

We’ve learnt that tittles were given out and the agreement was they develop together the Old Taxi Park but these are wondering why KCCA under the management of Eng. Kitaka rushed to develop the carpet without their knowledge, moreover doing shabby work according to the investigating Committee’s report which was recently released.

KCCA group is further faulted for having allegedly swindled money that was meant for the renovation of other roads within Kampala Metropolitan Area.

According to documents obtained by this website, KCCA on March 24th, 2020 contracted two companies, to wit M/S Stirling Civil Engineering Ltd, Prome Consultants Ltd and Kiru General Services undertake renovation works and expansion on Old Taxi Park, plus other roads which include Juuko Road and Queens Way in Entebbe at a contract price of over Shs8Bn.

However, despite having signed for colossal sums of money as funds for the project, the work done by the contractors has since been declared shoddy and not in reflection of the money that was received by the contractors. 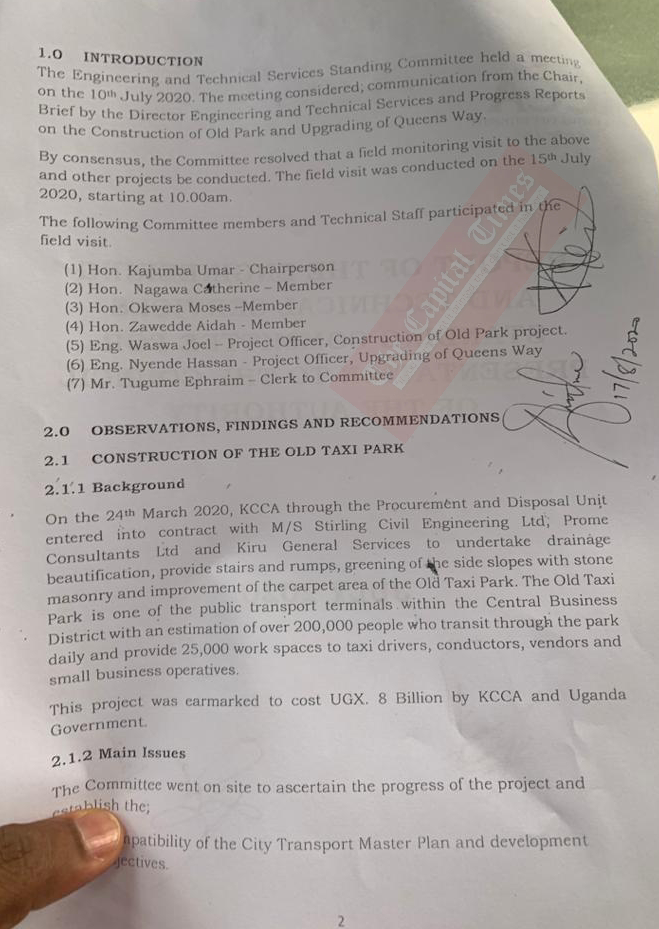 Part of the report reads

Documents seen by this website indicate that the Contracts Committee which supervised the construction works was not provided with prior information in regard to the details of the contract even when request for the same were made.

There was no clear plan and the artistic impression of the outlook of this project at site.

There was no clear relationship between the development and City Transport Model Objectives as it was difficult to tell whether the project was a reconstruction model of a Public Transport Terminal in the Central Business District or a car bond.

There was no evidence of prior Council and Physical Planning Committee approval of plans and designs as stipulated by the KCCA Act.

There seems to be no feasibility study undertaken, therefore KCCA did not plan enough in terms of scope of works and the cost.

Evidence shows that hoarding of the site was not included as part of the projects cost of Shs8 Billion as per the progress report submitted by the Directorate of Engineering and Technical Services of July 2020. The cost of hoarding will therefore be an additional cost to the project. 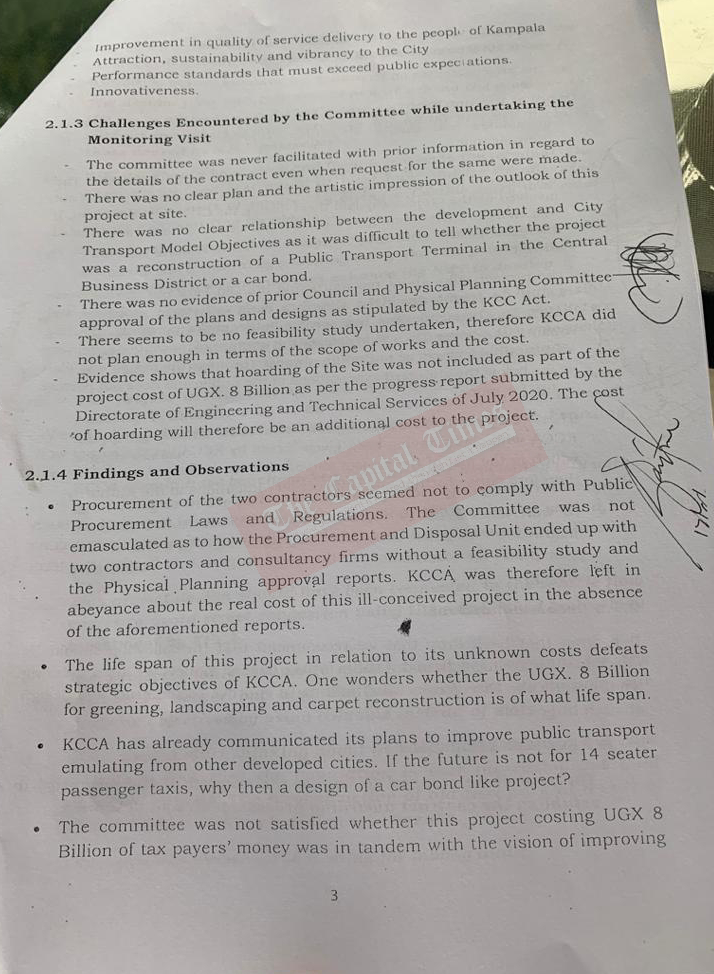 The investigating committee observed that procurement of two contractors seemed not to comply with Public Procurement Laws and Regulation. The Committee was not emasculated as to how the Procurement and Disposal Unit ended up with two contractors and consultancy firms without a feasibility study and the physical planning approval reports. KCCA was therefore left in abeyance about the real cost if this ill-conceived project in the absence of the aforementioned reports.

The lifespan of this project in relation to its unknown cost defeats strategic objectives of KCCA. One wonders whether the Shs8 billion for greening, landscaping and carpet reconstruction is of what life span.

KCCA has already communicated its plans to improve public transport emulating from other developed cities. If the future is not for 14 seater passenger taxis, why then design a car bond like project?

The committee was not satisfied whether this project costing Shs8 Billion of tax payers’ money was in tandem with the vision of improving the quality of transport service delivery to the 200,000 commuters and the 25,000 people who work in the park. 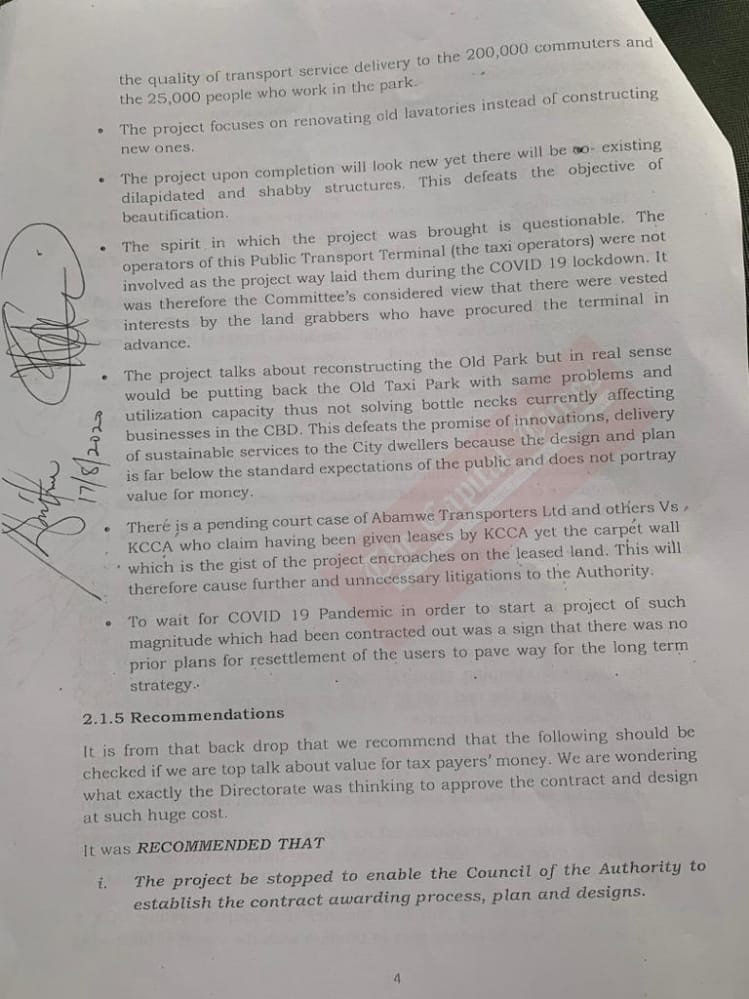 The project focuses on renovating old lavatories instead of constructing new ones.

The project upon completion will look new yet there will be existing dilapidates and shabby structures, which defeats the objective of beautification.

The spirit in which the project was brought is questionable. The operators of the Public Transport Terminal were not involved as the project waylaid them during the COVID-19 lockdown. It was therefore the Committee’s considered view that there were vested interests by the land grabbers who have procured the terminal advance.

The project talks about reconstructing the Old Park but in real sense it would be putting back the Old Taxi Park with same problems and utilization capacity thus not solving the bottlenecks currently affecting business in the CBD. This defeats the promise of innovation, delivery of sustainable services to the city dwellers because the design and plan is far below the standard expectations of the public and does not portray value for money.

There is a pending court case of Abamwe Transporters Ltd and others Vs KCCA, who claim having been given leases by KCCA yet the carpet wall which is the gist of the project encroaches on the leased land. This will therefore cause further unnecessary litigations to the Authority.

To wait for COVID-19 pandemic in order to start a project of such magnitude which had been contracted out was a sign that there was no prior plans for resettlement of the user to pave way for the long terms strategy. 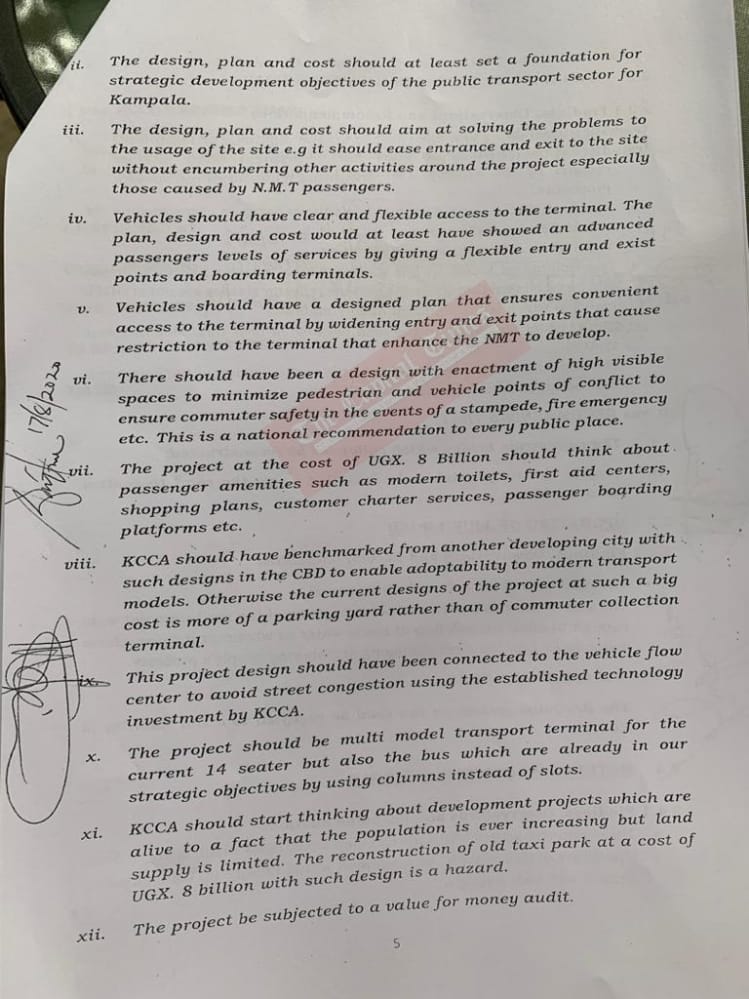 It is from that back drop that we recommend that the following should be checked if we are to talk about value for tax payer’s money. We are wondering what exactly the Directorate was thinking to approve the contract an design at such a huge cost.

It was recommended that;

The project be stopped to enable the Council of the Authority to establish the contract awarding process and designs.

The design plan and cost should at least send a foundation for strategic development objectives of the public transport sector for Kampala.

The design, plan and cost should aim at solving the problems to the usage of the site e.g it should ease entrance and exit to the site without encumbering other activities around the project especially those caused by N.M.T passengers.

Vehicles should have clear and flexible access to the Terminal. The plan, design and cost would at least have showed advanced passengers levels of services by giving flexible entry and exit points and boarding terminals.

Vehicles should have a deigned plan that ensures convenient access to the terminal by widening entry and exit points that cause restriction to the terminal that enhance NMT to develop.

There should have been a design with enactment of high visible spaces to minimize pedestrian and vehicle points of conflict to ensure commuter safety in the events of a stampede, fire emergency etc, this is national recommendation to every public place. 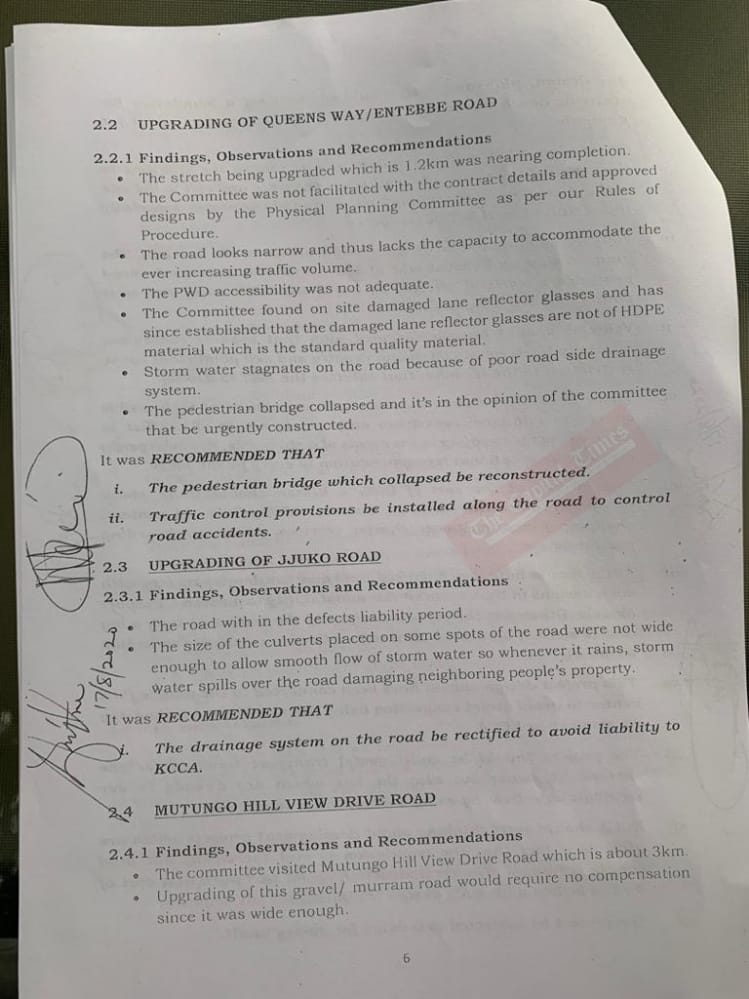 According to the investigating Committee, the Project is subjected to a value for money audit. 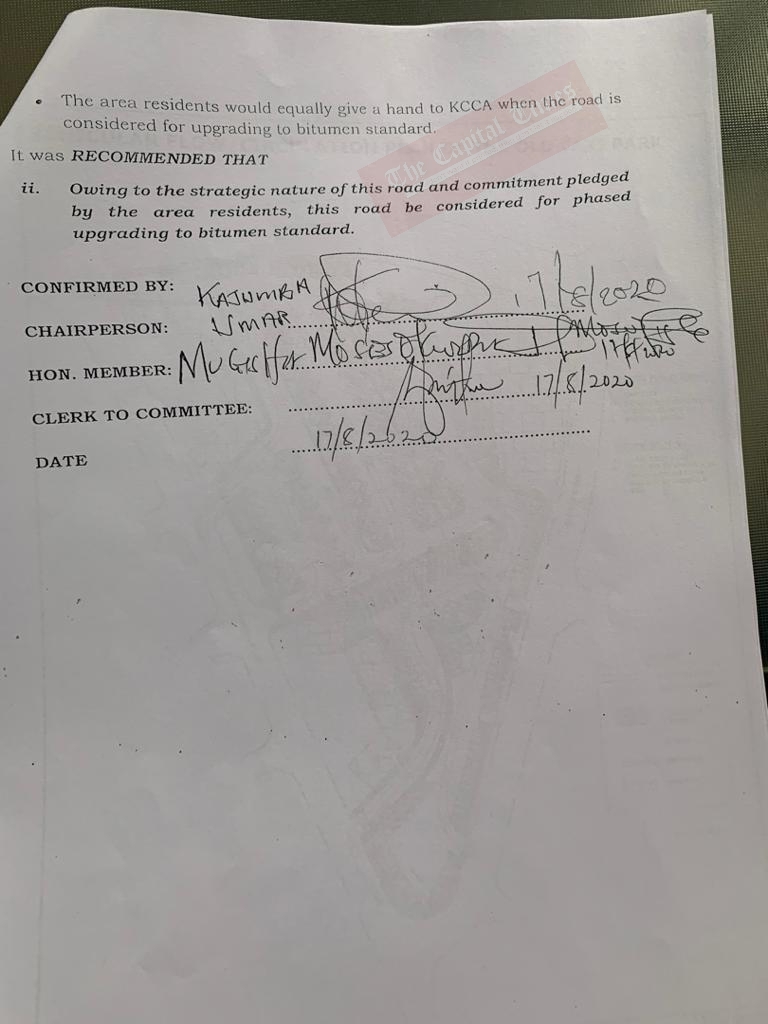