According our reliable sources, the President has been frustrated by the Minister and her Permanent Secretary, Mr. Robert Kasande who are reported to have persistently sabotaged any efforts to apprehend Mr. Godfrey Werikhe, the Deputy Executive Director and his junior Mr. John About Turyagyenda, the Manager Projects Management and Designs.

It should be noted that Mr. Kasande, who is the Chairman of Rural Electrification Board as well as the PS Ministry of Energy has been disregarding all efforts by Government Agencies such as Internal Security Organisation (ISO) and Inspectorate of Government (IGG) which had advised to have the two officers who have been solely in charge of technical operations at the electrification agency removed. 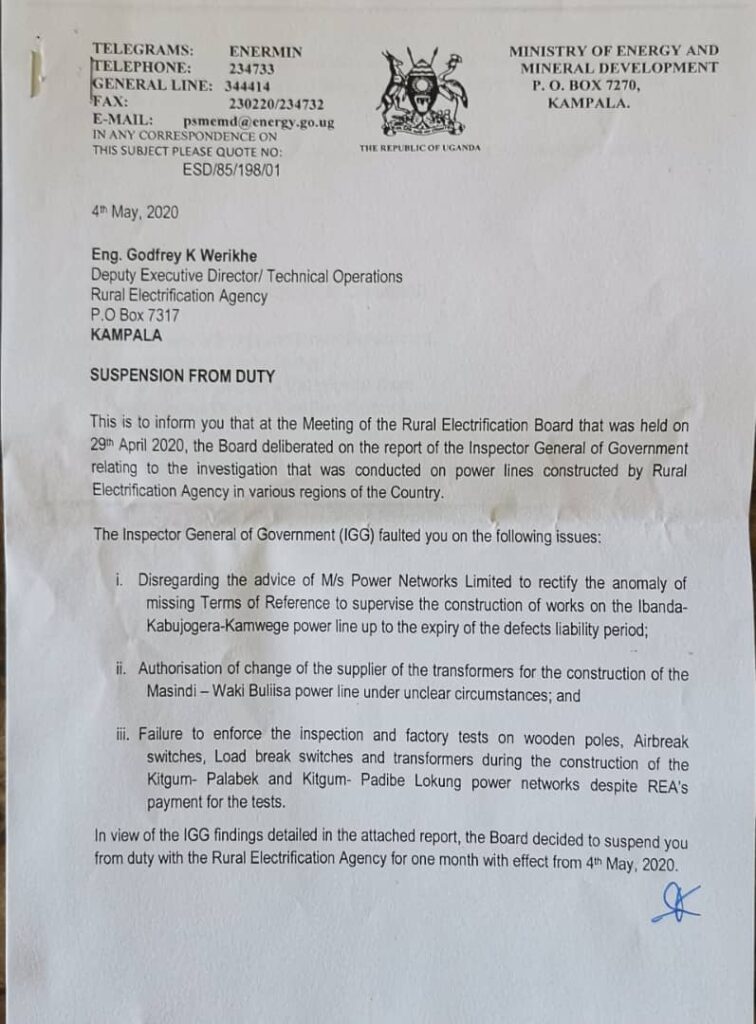 The PS is said to have knowingly asked the then Minister Eng. Irene Muloni to ignore such advice since these two were reporting to him and Kabagambe Kalisa their loot and in hundreds of thousands of dollars. This is the core reason the PS Kasande keeps threatening and intimidating any official in REA who dares to question the way he has always ignored to protect tax payers money when it comes to reports about the poor implementation of various schemes.

Information obtained by our reporters from a person privy to the investigations who preferred to remain anonymous because (is not allowed to comment on the story), noted that His Excellency President Museveni has for a period of over one year been personally investigating the energy sector with a specially selected unit of trusted economic fraud and energy specialists from his trusted agencies of ISO and SFC a fact that was unbeknown to both the Minister and PS Kasande as they moved on to push for the protection of the two known economic criminals in the Energy sector. 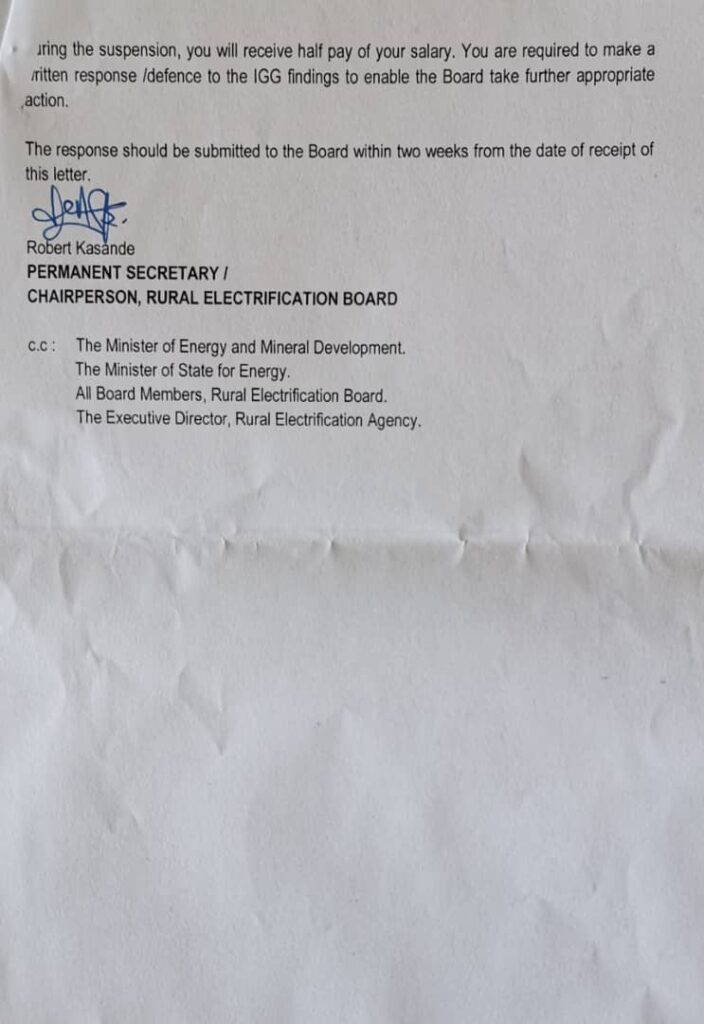 It is said that the PS would use the cover of the Board which had been assembled with a number of well selected members that would favour his opinion and vote against the likes of PS Muhakanizi who is said to have relentlessly questioned the reason as to why these known corrupt officials were left to work in the agency.

As reported in one of the earlier stories, the President got wind of the fact that PS Kasande and his Minister Hon. Mary Goretti Kituttu have always liaised with the Director CID AIGP Grace Akullo to technically delay the investigation to allow them make changes to parts of the Statutory Instrument forming REA in order to protect Werikhe and Turyagyenda from prosecution and also with a hope that the case would fade out before the file can be warranted for sanctioning by the IGG. 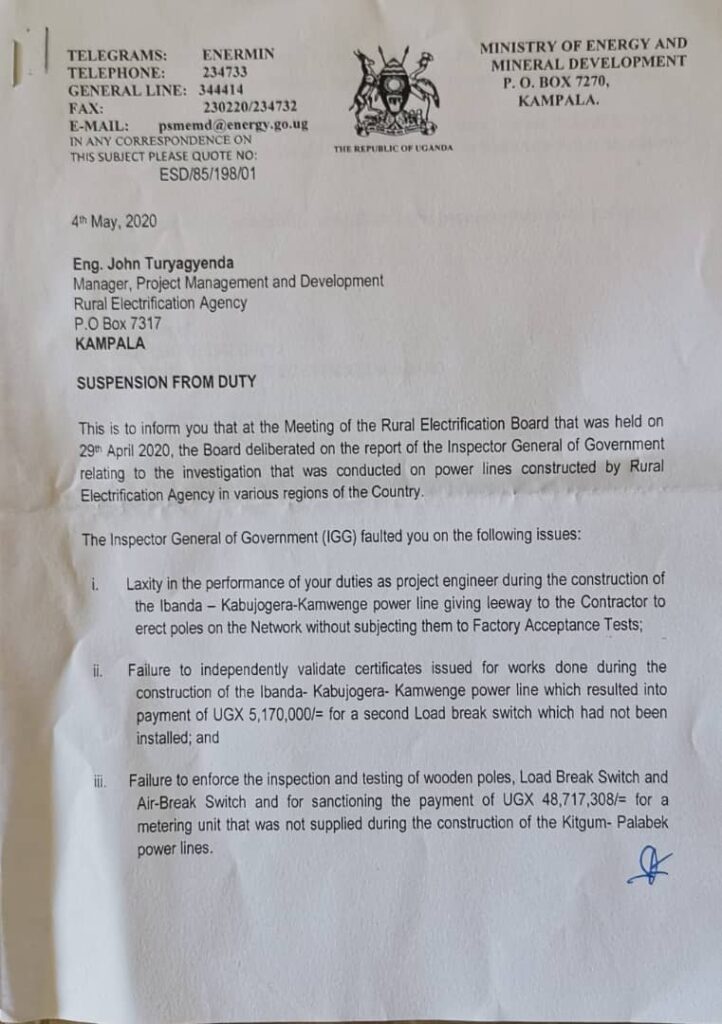 With the President having got wind of these on-goings, it is said that he informed the Minister in the sternest terms to desist from harbouring corrupt intentions while heading one of the most key Ministries in the country crucial to the economy of the country.

The President informed the Minister of his vision to have all villages accessing electricity by 2025, a vision that can only be achieved by an incorruptible staff of the agency. To this, he made her aware of the level of theft and deceit that has always emanated from that particular Ministry for the last 10 years, and this has constrained all efforts he had made to ensure that clean and affordable energy is available for the Ugandans. 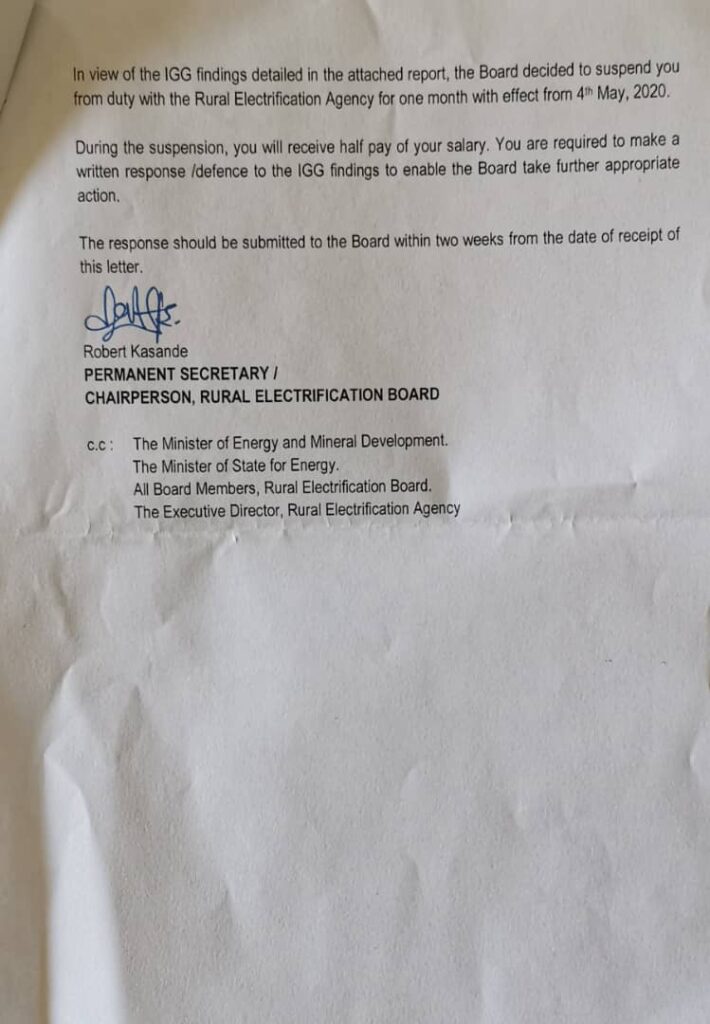 It was from this discussion that the President asked the Minister not to question his official directives but rather implement them to the dot hence get rid of the corrupt officials for prosecution in courts with immediate effect. There is a well-built cartel that is operated by Werikhe and Turyagyenda through which companies have reportedly lost hundreds of millions of dollars in kick-backs that are shared with a small number of players in the energy sector. This cartel had operated smoothly until the Executive Director of REA brought it to the Board in 2015, only to be forced on a 6 months suspension in order for their key errand boy Mr. Turyagyenda to clear off the evidence while working in acting capacity as Executive Director.

Minister Kituttu who had been flying with false confidence from a number of Generals prior to the phone discussion with the President, that she had been connected too by Mr. Turyagyenda became too hag-ridden to chair the third Board Meeting she had called on Monday 4th May 2020. She immediately delegated her University Course Mate of Geology Mr. Kasande the PS to chair the meeting.

Our fly on the wall at Amber House, the Ministry Energy Headquarters states that PS Kasande strenuously chaired this extraordinary meeting that bowed to the pressure from the HE and finally signed off the interdiction of their trusted lieutenants in the Agency, especially at a time they were reportedly eying US$ 400 Million from World Bank meant for increasing the free electricity connections in the country. The well connected fulcrum of the Mafioso, Mr. Turyagyenda, a civilian, is apparently guarded by 4 UPDF commandos on the orders of certain four star General who is also Minister.

Staff of the Ministry of Energy who prefer to remain anonymous have stated that the Minister of State for Energy and his PS had hatched a move of giving this World Bank money to a private entity UMEME in order to handle the connections program, something that was rejected by the Executive Director of REA Mr. Godfrey Turyahikayo (an expert in rural electrification and renewable energy), the Natural Resources Committee of Parliament as well as individual players in the energy sector mostly the cooperatives that are maintaining electricity lines upcountry such as Kilembe, Kyegegwa and Pader. It is unanimously acknowledged that PS Kasande has been at the fore of the failure of performance not only with REA as a board Chairperson where he has singlehandedly been protecting the corrupt staff of the Agency but also as a Permanent Secretary at the Energy Ministry where the majority of staff are too disgruntled to work efficiently and reignite the booming spark expected in the ministry that is supposed to be the main driver of the economy. A number of highly experienced staff at the Ministry are currently working as consultants of big Energy, Oil and Gas companies because they have lost total confidence in the entire Ministry top leadership especially Energy.

Our team continues to receive reports of theft that these two officials continue to operate even at a time when they are already under investigation, the basic reason the Minister and the PS did not want them out of Office.

According to one whistle-blower from Bushenyi, Mr. Turyagyenda was using a certain company named C & G Andijes Group Ltd to buy off contracts and winning bids and later the company is tasked to do the job only half way but end up being paid for a full job after certificates of completion have been signed off by Turyagyenda and his supervisor Mr. Werikhe. 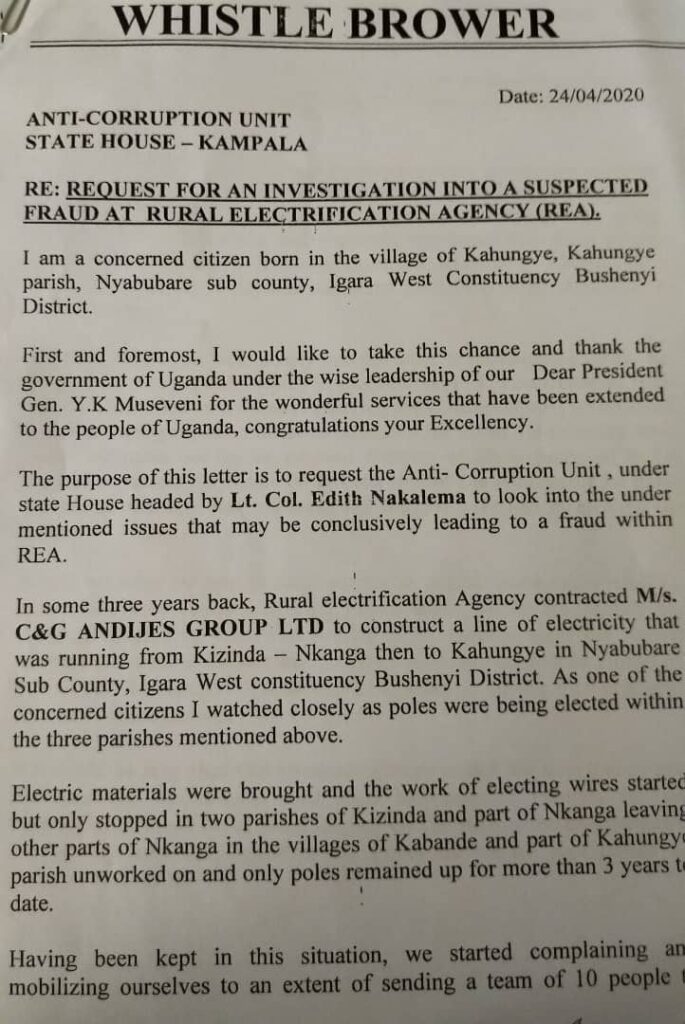 It is reported that if the company was to extend electricity for 15 KMs, they only build 8 KMs with highly substandard electric materials, and claim payment for a full 15KMs which is often signed off by Mr. Turyagyenda and his Project Engineers, the amount is later shared together with selected members of the cartel that is firmly protected by the Permanent Secretary who doubles as Chairperson of the Agency.

The same electricity scheme is repeated in numerous projects while adding on just 3-5 KMs while continuously claiming money for the entire mileage. 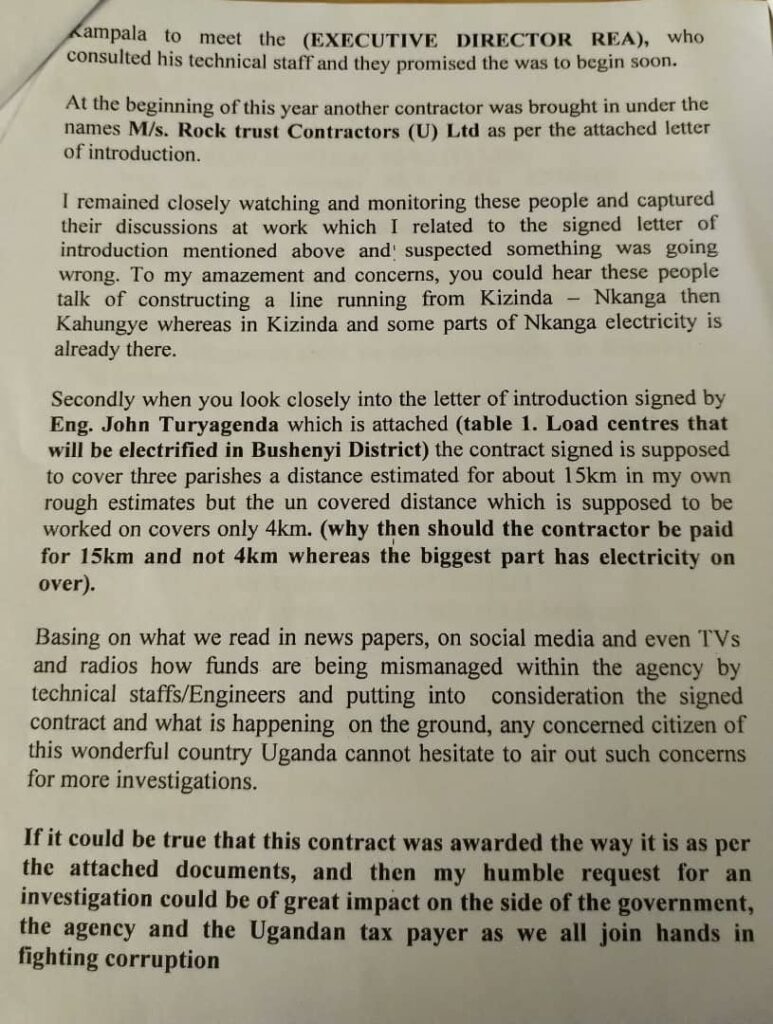 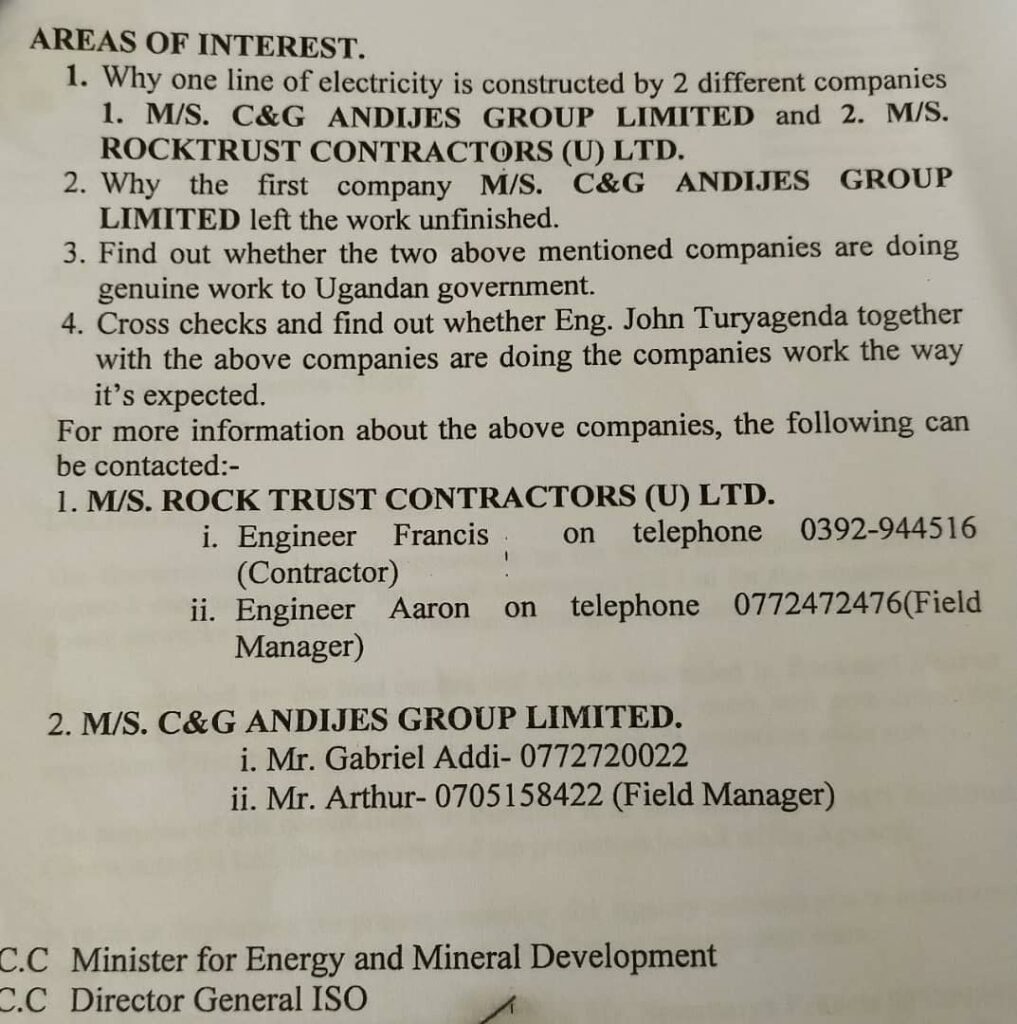 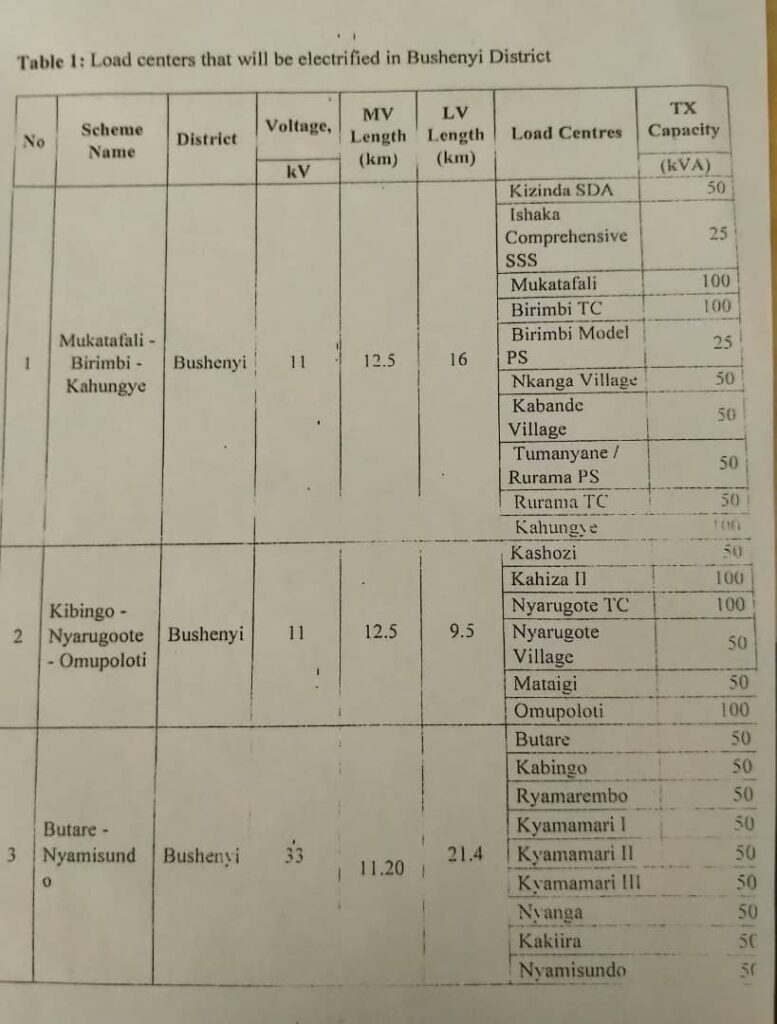 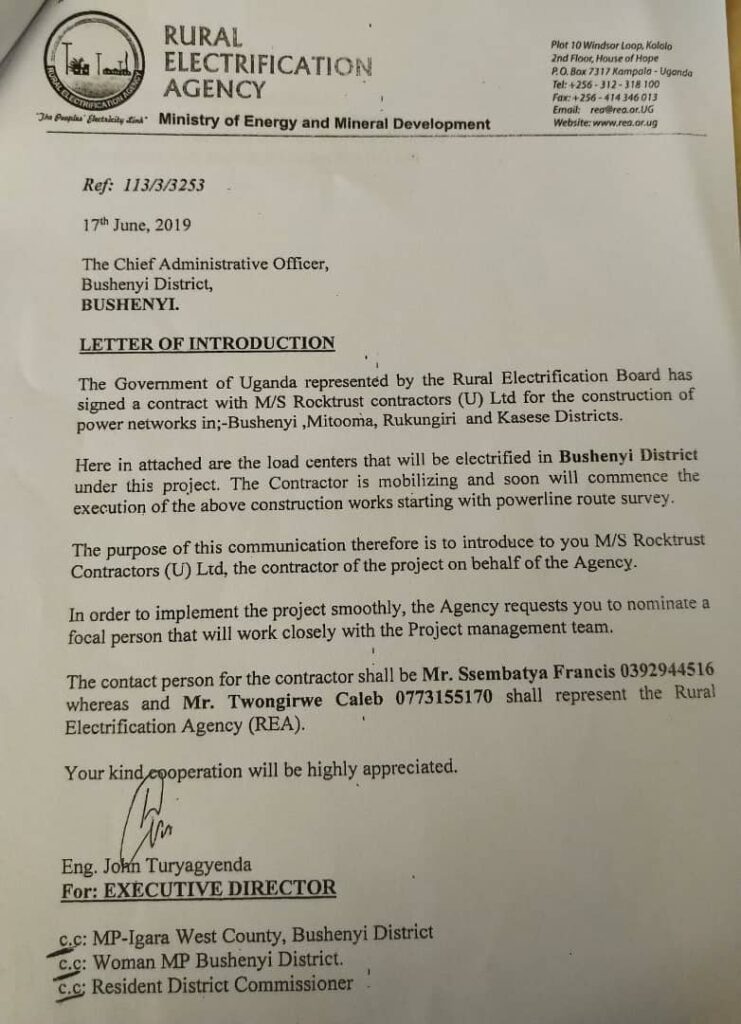 The theft in the Energy Ministry is real and our series on Energy Mafias will continue to debunk the myth that has been covering that sector.

Next Episode On Energy Mafias is coming Soon..