Since taking office as Deputy Speaker of Parliament way back in 2001 (20 years ago in May 2021), Rt. Hon. Rebecca Alitwala Kadaga has created one of the most secretive but powerful political hegemony within the NRM environs in modern Uganda’s Political history.

It’s hard to tell how much the legendary Woman Member of Parliament (Kamuli Woman Legislator under affirmative action since 1989) has enriched herself in the course of running the Legislative arm of Government, but our investigative team has been able to pick the highly peculiar travel expense in the course of 2 years from 2017 – 2019 that will shock the Ugandan citizens/taxpayers.

For a fact, following the numerous postponements of plenary sessions and committee meetings, Ugandans had noticed that prior to the Covid-19 lock-down, parliament was almost non-functional because the Speaker was always out of the country and she had literally crippled efforts of her deputy being able to take Fort in her absence (God knows why but this story on exorbitant travel expense might give us an answer).

The Capital Times investigative team is in possession of reliable information of what could be the most open creative accounting secret by parliament to maintain the extravagancies of their queen-like Speaker especially during the Financial Years 2017 – 2019 2nd quarter.

During the above mentioned 16 or so months, the Speaker of Parliament along with her extremely close confidant, Hon. Elijah Okupa the Member of Parliament representing Kasilo County, Serere District, racked up a combined 986 days in travels While operations in the 9th and 10th parliament remain obscure as was witnessed in the media about the contested recruitment of the Chief Internal Auditor alas a story for another day, a risk Parliament would not afford to take since hiring an externally recruited official not accustomed to the accounting anomalies would lead to the discovery of the creativity that has been ongoing and such huge and unexplained travel expenses would have drawn attention from the watchful eye of the expert. 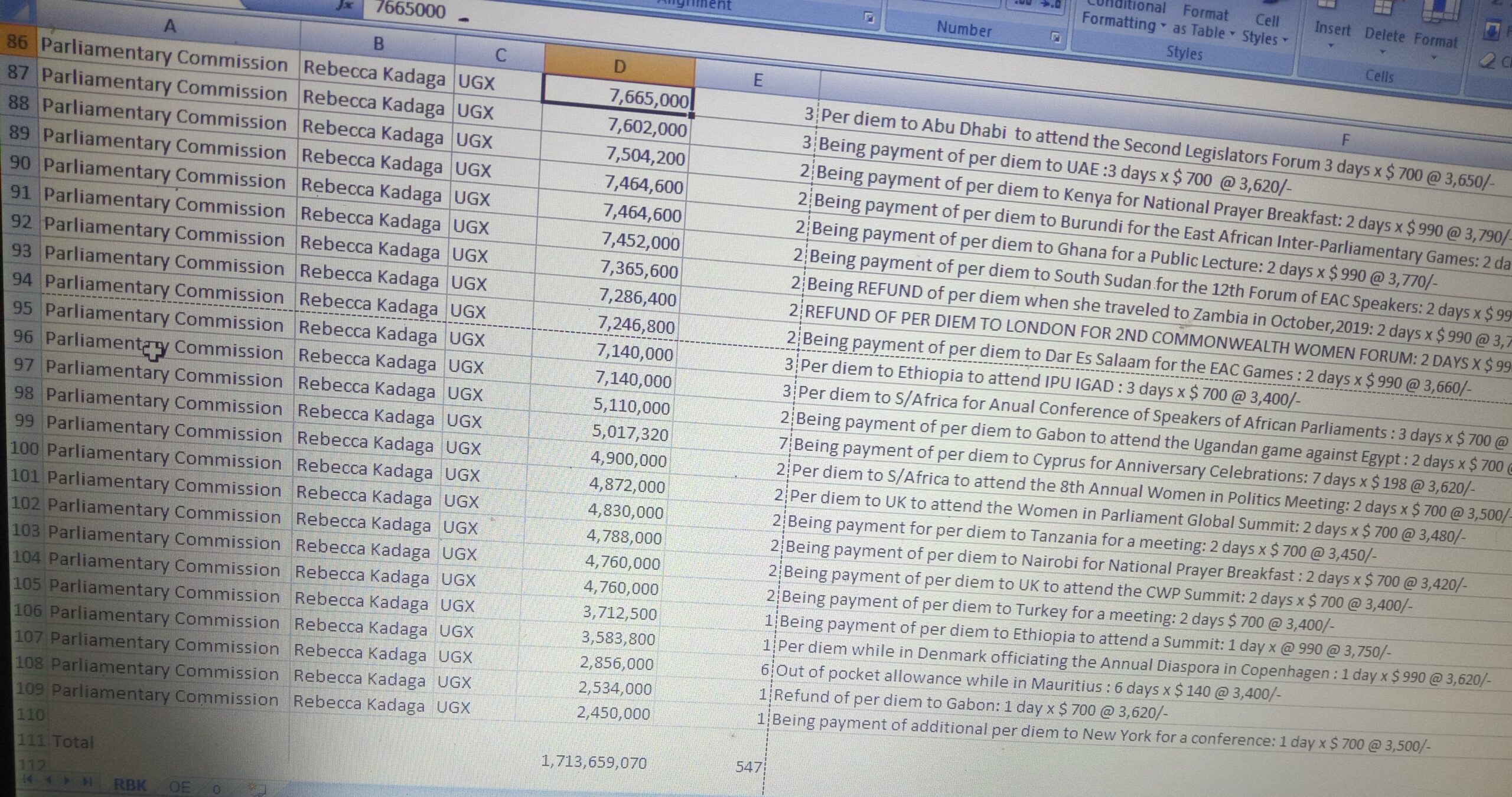 An analysis of the information obtained indicates that, in less than 16 months from 2017 – 2019, Hon. Elijah Okupa was on the plane 21 times while Rt. Hon. Kadaga made 20 flights under the guise of CPA Executive Committee meetings.

Not only were they accumulating flight hours in the process but also receiving huge per diems from the tax payers’ money without any accountability. Documents got indicate that in one trip for the Commonwealth Parliamentary Association (CPA) retreat in Tanzania, Hon. Okupa was paid 24 Million after spending there 14 days while Hon. Kadaga received 22 Million for spending 6 days at the retreat.

Our investigative team was able to contact the CPA Headquarters Secretariat (www.cpahq.org) at Richmond House, London and they noted that “CPA has always paid for travel costs for the normal activities organized by member states, however, Executive Committee (ExCo) attending ExCo meetings have always been paid travel by the association while the host country would pay the accommodation and per diem to the visiting teams. For the branch meetings, the association pays for all the expenses.” This begs the question on whether the money that has been always reimbursed by the CPA to these parliamentary members has been reflected on the Parliamentary Commission accounts or creative accounting practices are being used like how the IGG recently discovered in recent audits. 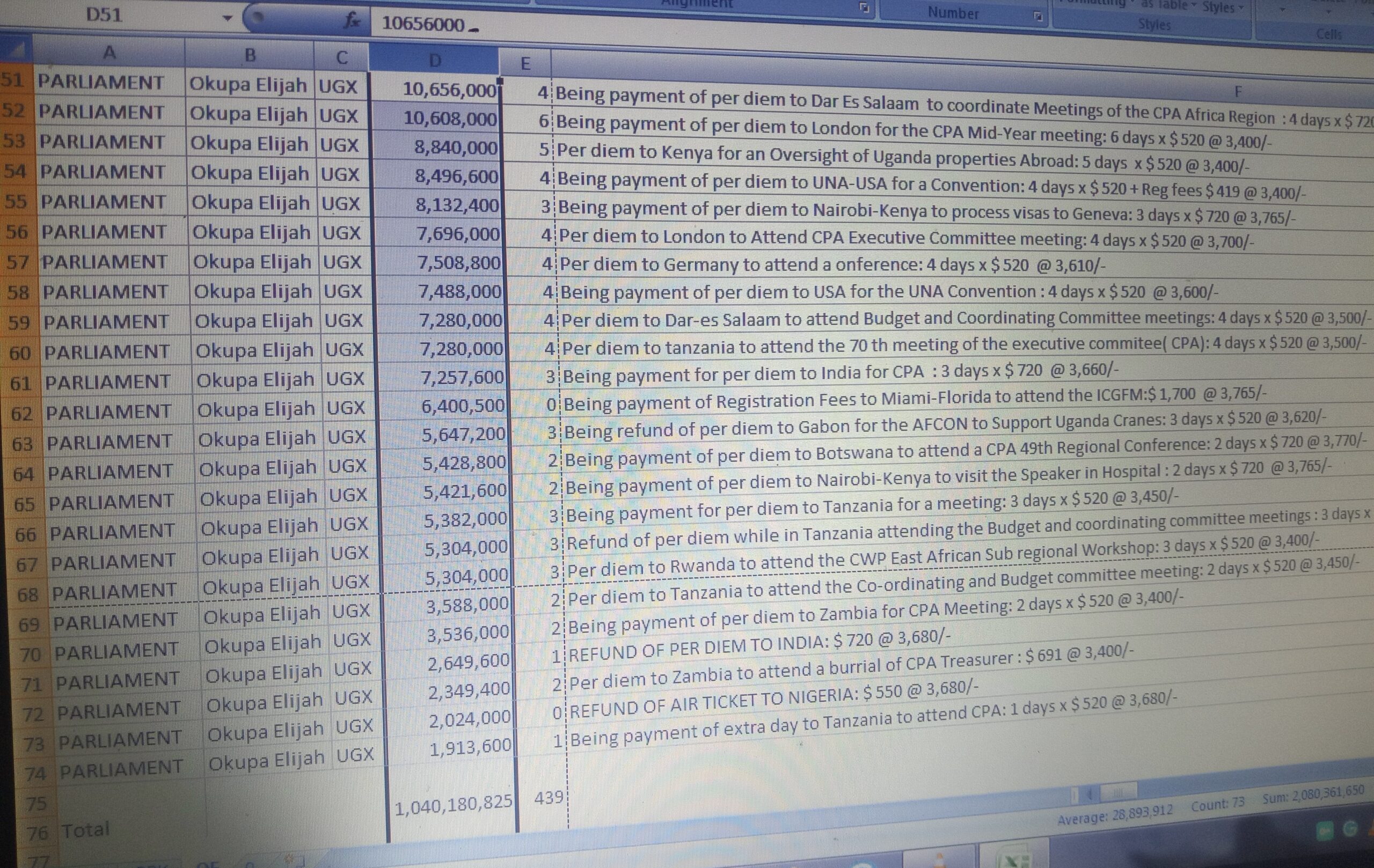 Further scrutiny of the annual reports from CPA Headquarters indicate that a “total of £223,686 [and]£304,048 was reimbursed to the 34 parliaments as of [2018 and 2019 respectively] for the travel and accommodation of the ExCom members”.

So why would the tax payer incur these costs over the period of time – 2017 to 2019? Where is the reimbursed money from the CPA Headquarters secretariat reflected on the parliamentary commission over the past period of time? Shouldn’t the Auditor General conduct a forensic audit on all the travel expenses of the Parliamentary Commission over the past five years with an objective of identifying the value for money?

These and many other questions are on the minds of Ugandans especially now when their respective members of parliaments are due to choose speakership position to ponder on all these questions and hence the reason the citizens are asking for a transparent and accountable leadership especially by the fact that the major responsibility of parliament is nothing but an oversight.

In another development, Hon. Elijah Okupa who is a major Kadaga surrogate was also a big beneficiary under the Uganda North American Association (UNAA) convention of September 2017 when he got a whooping UGX 52 Million shillings while Kadaga was also paid a hefty 68.1 Million for the same time on a retreat at the Intercontinental hotel, Miami, Florida. 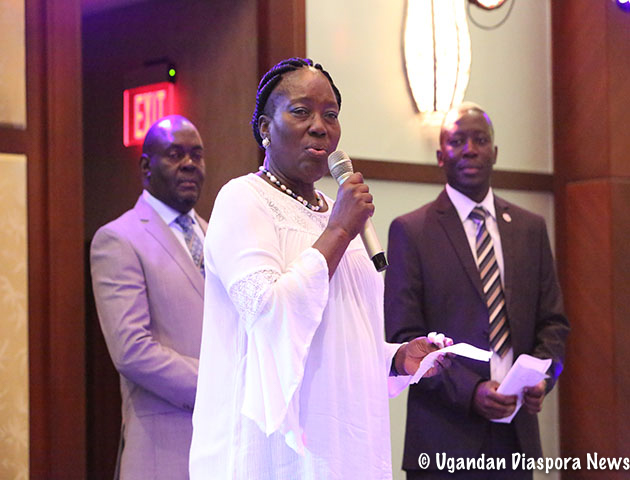 This brings to the minds of the citizens as to whether there was any value for the 19 days spent away from Parliament on an unnecessary retreat yet we have a fully-fledged embassy to represent the government on such function or even 3 days as a guest speaker would have been adequate representation if it needed the Speaker of Parliament.

This leaves a lot to beg – should members of parliament travel at the expense of the tax payer for functions that add no value to the August house? Why shouldn’t Ugandans attending such luxurious conventions pay from their pockets after all, an MP is earning an average of UGX 37 Million (US $ 10,000) a month. The UNAA convention is largely a symbolic get-together of Ugandans in America and the government can be easily represented by our foreign missions and consulates in the region.

Consequently, a number of MPs in the 10th parliament that we talked too have expressed their dissatisfaction with the management of the legislative arm under the current Speaker of Parliament who together with her trusted confidants are constantly on travel across the world.

The majority of these MPs who are left in limbo are feeling alienated as many of the 450 MPs, compounded with the fact that the current Deputy Speaker of Parliament, Rt. Hon. Jacob Oulanyah had been rendered a ceremonial deputy hence failing to get a reasonable amount of time to handle parliamentary business to cause a change in the status quo while working under the leadership of Hon. Rebecca Kadaga. 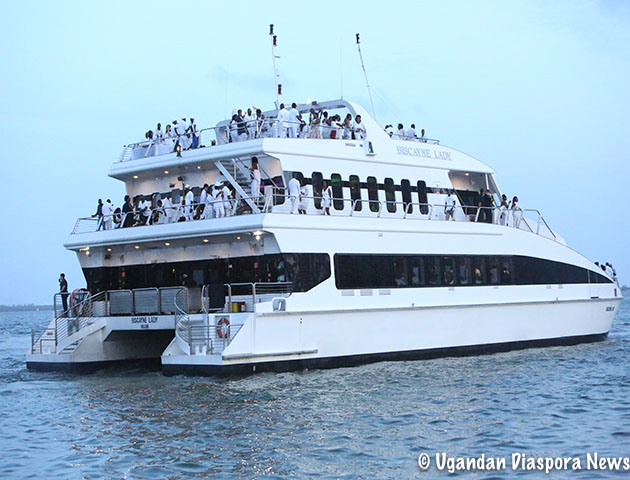 The MPs of the 10th Parliament most of whom preferred to remain anonymous due to the bullish character from the Speaker and her cohorts, are furious that despite their ever-growing number in the house, almost 200 MPs have not gotten a chance to travel for more than 2 times in the five years that they have been serving, yet only 2 members of the entire house were able to make 986 days between them in only 16 months.

This culture of corruption through travel being fostered by Rt. Hon. Kadaga especially during the 10th Parliament has greatly impacted the actual performance of the house in terms of legislation – since the house was always in recess because Madam Speaker was out of the country. Crucial parliamentary activities such as the debates on reports, committee meetings and crucial plenary sessions that impact a whole country were frequently suspended and this has caused a lack of scrutiny to critical areas and reports such as the budget.

Unexplained figures are always corrected way after the budget has been passed hence the high number of supplementary budgets coming to the floor of parliament. In the FY 2017/18 alone, ONLY 13 committee reports were debated and adopted by parliament, meagre 815 committee meetings out of the planned 1,500, and a paltry 46 plenary sittings out of a planned 107 were held as per the Parliamentary Calendar – call it a fail mark in the exam for an entire year, notwithstanding that 60% of these were even spillovers from the 9th Parliament

Not suprising, the above second-rate performance by the 10th Parliament leaves a lot to ponder on especially when it comes to these unending and arcane travel expenses because during these months in question, Rt. Hon. Kadaga was also at one time hospitalized (in Nakasero Hospital, Kampala, Aga Khan, Nairobi and sick leave at home) for more than 3 months after suffering from severe flight fatigue (can you imagine) following 22 days of travel from the New York, US to Rabat, Morrocco, a trip that cost the tax payers over 65 Million shillings, of which most of these days was a postponement of parliamentary work, because it’s a one man’s show See https://www.independent.co.ug/kadaga-suffering-from-fatigue-related-illness-parliament/.

As a matter of fact, this is a point of concern that needs a deeper forensic audit for the period of the 10th parliament as the continuously unexplained figures may point to the reason parliament has actually been side-tracked from the actual business of legislation to travel. So many activities, however fundamental have been sacrificed by the August house which calls for a return to the fundamental objective of parliament – Representation of the masses.

In consequence, a lot of monies are being spent on travel rather than research or consultation of the citizens and this has greatly impacted the quality of the laws and budgets being passed because they do not reflect the acceptable public opinions despite the fact that it is we the tax payers to live and work under these half-baked and obscure laws.

As we prepare for the 11th Parliament, our investigative team has embarked on a study of the performance of 10th parliament in order to awaken the citizens for we Ugandans are the ones being represented as well as bearing the cost of maintaining these law makers. It is therefore absurd that they have chosen to abandon the needs of their constituents at a time when we need them the most in such a struggle. Our team’s review of the parliamentary expenses points to the fact that the leadership needs to change in order to get in sync with the current generation that seeks more of participatory lawmaking rather than the aloof style that has been at play.

In the next series: A look at the Speaker’s Parliamentary Donations and which side of the house has benefited more, the parliamentary philanthropy and forceful deductions from the members of parliament under the guise of social justice. Information is power, an informed public, is a liberated one.