Trending
HomeBusinessHam Vs DTB Appeal: Bank Of Uganda Runs Out Of Case, Leaves DTB To Carry Its Own Cross

Bank of Uganda has officially quit the case involving city tycoon Hamis Kiggundu alias Ham and Diamond Trust Bank, in which he accuses the financial institution, together with its parent bank, Diamond Trust Bank Kenya, of illegally withdrawing over Shs128Bn from his company accounts.

Bank of Uganda had applied to join the case as Amicus Curiae (Friend of Court) arguing that as the regulator of financial institution they are privy to the matter. However, their request, which had been tendered in by the Central Bank’s legal team headed by lawyer David Mpanga, was thrown by the court on  Thursday, January 28th, 2021.

Now the latest development is that Bank of Uganda has finally admitted that Diamond Trust Bank Uganda and DTB Kenya committed mass illegality by debiting their client’s accounts without consent from him and went ahead to engage in syndicate lending without authorization from the Central Bank, well-knowing that it was illegal.

A letter  issued to court by lawyer Mpanga, of Bowman Advocates, announcing the Central Bank’s withdrawal from the case reads in part thus;

Reference is made to the above-captioned matter wherein we act for the Applicant (Bank of Uganda), hereinafter referred to as ‘our Client’.

We have consulted with our Client regarding the Court’s ruling. Our Client has informed us that it is not willing/ interested in being added to the main Suit as an Interested Party. Accordingly, we write to the Honorable Court to inform it of the same. 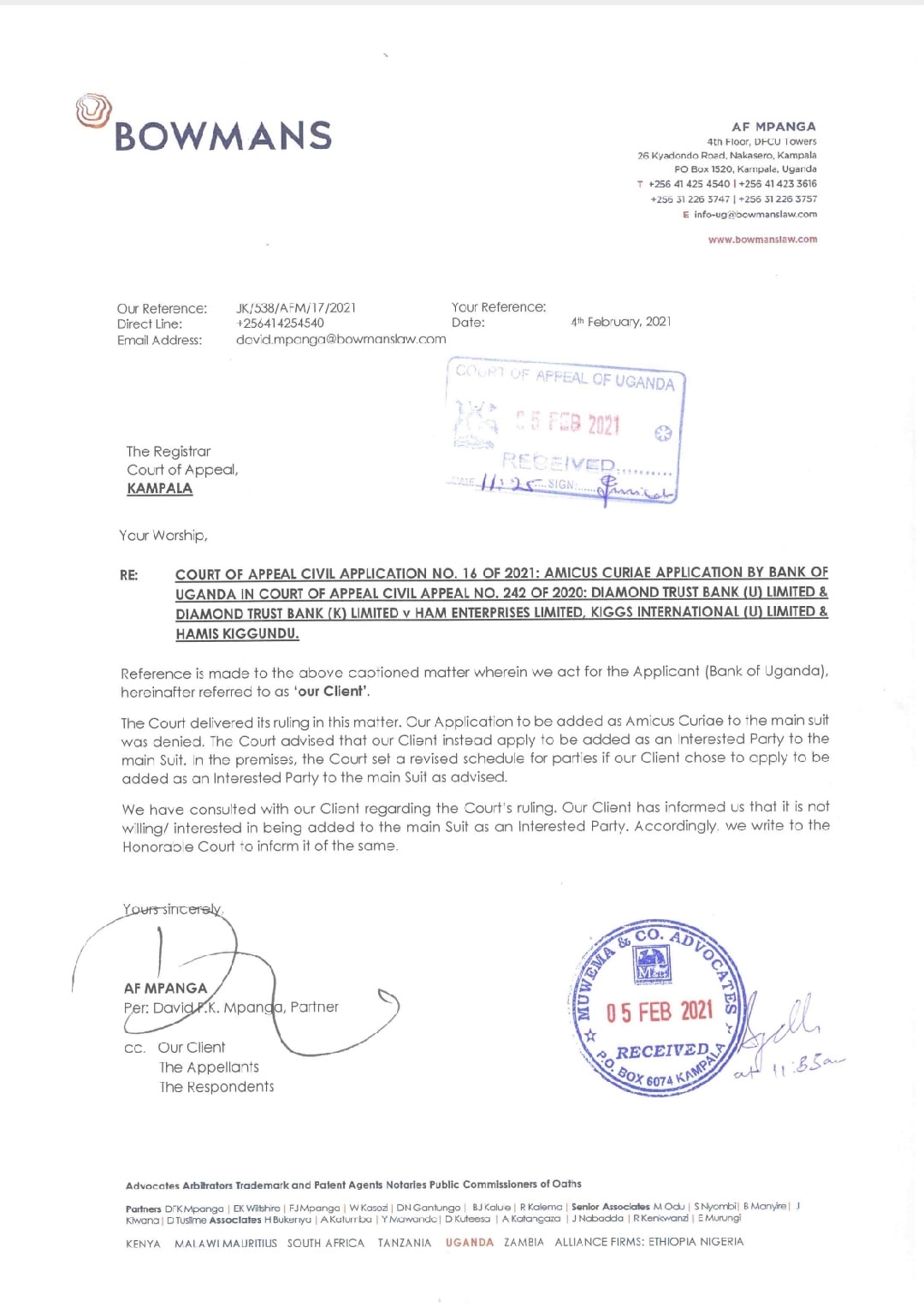 The court of Appeal on January 28, 2021, dismissed an application by BoU seeking to be allowed to join the Ham-DTB Bank loan case.

BoU applied to join the case as a person who is not a party to a case but assist the court by offering information, expertise, or insight into the issues in the case.

The court ruled that BoU did not fulfil the requirement of neutrality and impartiality in relation to the decision of the High Court.

The judges observed that BoU had argued that it is adversely affected by the court orders in the performance of its statutory duties, a claim their lawyers did notably justify in court.

It should be noted that on October 12, 2020, DTB Uganda appealed the High Court judgment which ordered the bank to refund Kiggundu $23.2m (Shs34b) which they had deducted from his accounts claiming he had failed to service a loan they had extended to him.

Justice Henry Peter Adonyo, the trial judge, had ruled that the money was illegally recovered from Kiggundu’s bank accounts for repayment of loans the bank lent to him illegally because he had adduced evidence of payment of the said loan.

The court also ordered the bank to return all property that Kiggundu had mortgaged for the loan.