The Unit Disciplinary Committee (UDC) sitting at the Chieftaincy of Military Intelligence headquarters in Mbuya has sent five civilians and One soldier to the Makindye based General Court Martial.

Col Tom Kabuye the Chairman of the UDC ,while reading the charges,said that Mr Erepu Joakim was arrested while in possession of military Information both in hard and soft copy on his laptop. Mr Okei and Omera were both found with fire arms and ammunition which were illegally acquired.

Another suspect to face General Court Martial is Mr Nyanzi Allan a resident of Salama Zikusooka village who was arrested wearing military Uniform and disguising as a UPDF soldier.
Also in court was Mr Ssentongo Rogers who was found in unlawful possession of military stores which included, Miltary Uniforms, military shoes, military jackets and a bag. 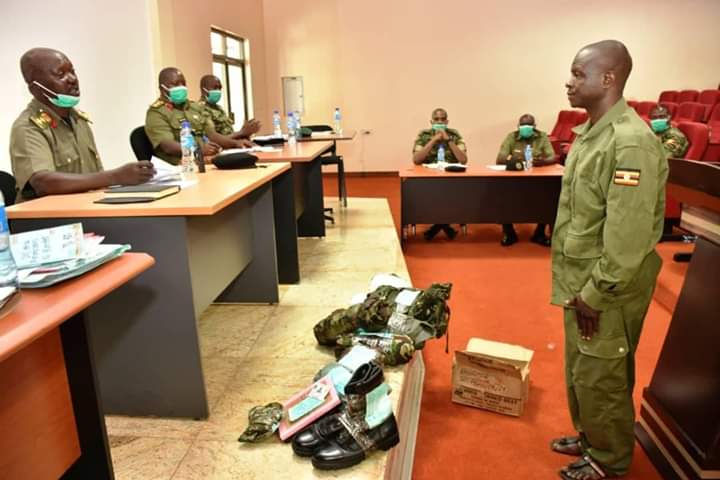 Some of military of exhibits

L/CPL Orono will also face General Court Martial on charges of murder. He is accused of killing Mr Sserwadda Simon of Kazo in Kawempe Division.

Col Tom Kabuye while giving his judgment, said that UPDF will not allow anyone to use military uniform to commit crimes or to wear it unlawfully. He added that the Authorities of the Army are committed to keeping discipline and will not keep a blind eye to whoever wishes to tarnish the reputation of UPDF.