Sheema Municipality Member of Parliament who doubles as the Minister of science, technology and innovation in the cabinet of Uganda has wrote to president Museveni requesting him to save him from Money lenders.

According to a letter we landed on dated December 20, Tumwesigye reminds President Museveni of the financial pledges as below..

“Your Excellency,
Re: REMINDER ON PLEDGE TO PROVIDE FINANCIAL ASSISTANCE

Allow me to thank you so much for recently giving audience to the delegation from the Russian Federation, myself and staff from the Ministry of Science and Technology.As a follow up, the technical team and myself will travel to Moscow next week.

Permit me also to thank you for reaffirming the pledge to help me financially on the personal discussions you kindly allowed me to have with you on the same day, after concluding the discussion with the above mentioned Russian delegation.

You reaffirmed the pledge to help me settle the debts that accrued from last year’s successful election  of MP Sheema Municipality. 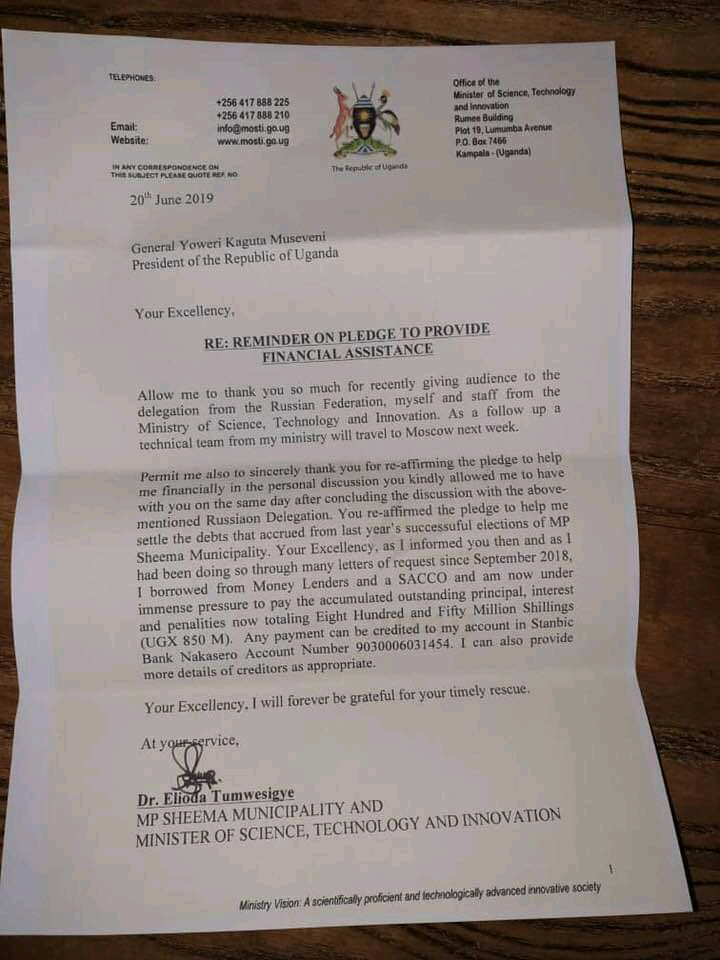 Minister’s letter to the President

Your Excellency as I informed you then as I had been doing so through many letters of request since September 2018, I borrowed money from Money Lenders and a SACCO and now am under pressure to pay the accumulated principal, interest and  now totaling to Eight hundred and fifty million Shillings (UGX 850m).

I can also provide details of creditors as appropriate.Your Excellency, I shall  forever be grateful for your timely rescue. “

But it should be noted that even the Sheema Municipality MP seat for which Tumwesigye borrowed money is hanging on a thread, after the Constitutional Court yesterday ruled that he and six other Members of Parliament were unconditionally elected.

The Constitutional Court nullified the election of six Members of Parliament on grounds that they Contested for non-existing vacancies.

The affected legislators are from the newly created municipalities of Bugiri, Apac, Nebbi , Kotido, Ibanda and Sheema; and notably among these are Asuman Basalirwa of Bugiri Municiplaity, and Minister Elioda Tumwesigye for Sheema.

The ruling was made by 5 justices  including; DCJ Alphonse Owiny-Dollo, Kenneth Kakuru, Cheborion Barishaki, Fredrick Engonda- Ntende and Christopher Madrama, who passed a unanimous agreement with the petitioner and a concerned citizen Eddie  Kwizera, that  the election of the 6 MPs before the dissolution of the  existing Parliamnet was null and void.

The justices reasoned that the election of the 6 MPs cannot stand because they offered themselves to contest for constituencies  whose   administrative units, villages or cells had not yet  been demarcated  by the Electoral Commission as the law states, that such constituencies  created by division of others takes effect in the next general election .

The Court explained that much as Parliament has the power to divide Uganda into so many constituencies and  the Electoral Commission is charged with a duty to ensure that each constituency is represented in parliament, this can only be done  during a General Election or  in a case of a  by -election after  the speaker of Parliament announces an existing vacancy.