Trending
HomeBusinessTit For Tat! MTN At Verge Of Losing Over Shs 400Bn For Throwing Daj Communications Out Of Business

In his affidavit sworn in the Commercial Division of the High Court in Kampala, Hon. Ruhunda, asserts that MTN’s September 19, 2018 decision to take over operations of his franchise business in Mityana and Mubende was in “contravention of the contractual terms.”

For the last eighteen years (18), Ruhunda, under his Daj communications Ltd has been the pioneer MTN dealer for the biggest parts of Rwenzori region, western Uganda covering Kabarole, Kyenjojo, Kamwenge, Kyegegwa, Mityaana, Mubende, Ntoroko and Bundibugyo, Kanungu and Kasese.

It is in running the operations of this franchise that Ruhunda invested much of his energy, finances and time for over 17 years, sometimes running to commercial banks to get loans to meet MTN’s requirements on business consolidation.

Ruhunda, for example, sought a loan from KCB Bank to acquire the trade territory of Mityana from Labule Telecom Limited at Shs250m.

He also invested heavily in vehicles, human resources and rent to run the telecom’s businesses in 10 areas his franchise covers.

But the MP was shocked to learn that MTN had hatched a plan to throw him out of business in the areas of Mityana and Mubende, and had lined up another company, named Black Knights, to replace DAJ. 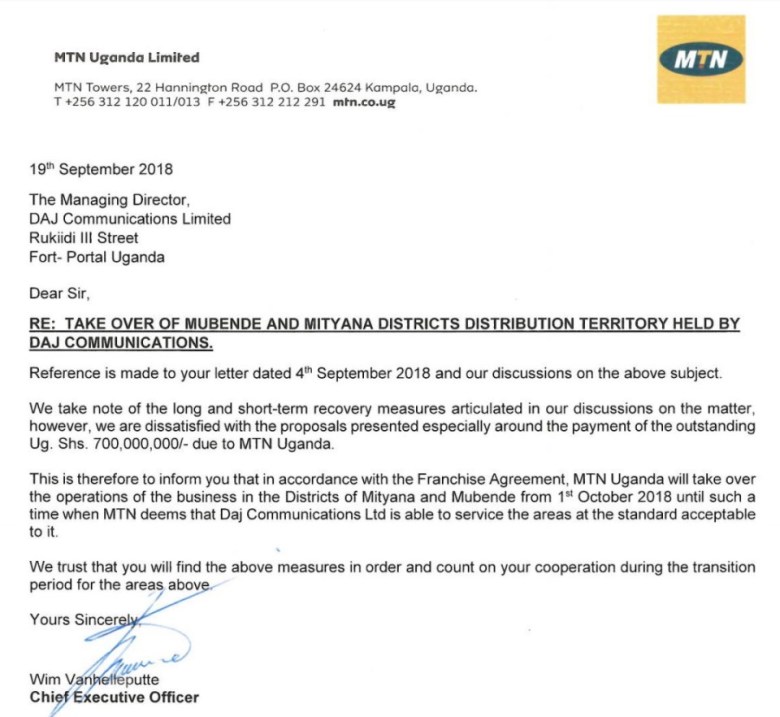 In fact, MTN appointed Black Knights to run its franchise in the two districts just two days after it informed Ruhunda and DAJ that they should prepare to quit.

Ruhunda is aggrieved that MTN moved to bring down his business out of the blue, arguing that there was no breach of contract on his part that necessitated the telecom’s takeover in Mityana and Mubende.

In fact, before MTN’s decision that Ruhunda says was hugely detrimental to DAJ Communications, the telecom had started deducting its cash at the source, offsetting shortages that had been reported in a few instances. 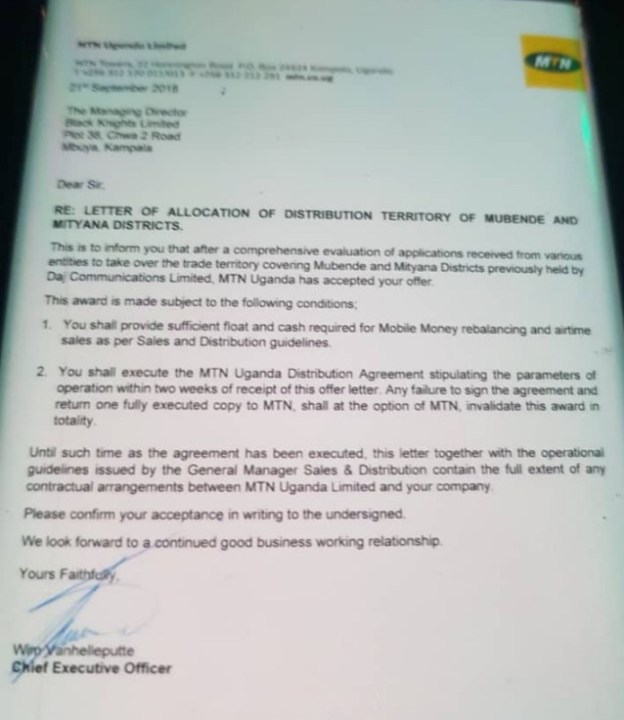 He now terms the takeover in the two districts arbitrary and unreasonable since it even meant more losses for Ruhunda and DAJ Communications because of the ambiguity on how the takeover would be handled, the length of time it would take, what the MP’s company would need to do to regain the franchise in the two districts, how the profits and losses would be shared between DAJ and Black Knights, and who would be responsible for the employees in the period of the takeover.

But even if these were clear, further argues Ruhunda, the appointment of Black Knights would remain illegal since it “was not permitted by the contract” between MTN and DAJ, and was thus “constructive termination of the agreement” and contrary to its terms.

Reasoning that “a franchise is a long-term relationship agreement requiring substantial commitment and loyalty,” the businessman asserts that MTN cannot compensate him enough for the damage it has inflicted on the brand of his company, which he and his colleagues built from scratch.

“[The directors and staff of DAJ Communications Limited have] built a strong brand and reputation in the areas of operation and the purported takeover will seriously affect that reputation both in the areas taken over and/or other remaining territories,” notes Ruhunda in his affidavit.

TheCapitaltimes can exclusively reveal that ever since Ruhunda seemingly went on the collision side with the powers that be, Mwenda and Margaret Muhanga’s job has been to collect evidence which they would later deliver to MTN CEO justifying that it was becoming dangerous doing business with a politician who is not in good books with Muzei. The two smart city honchos also made it a point that Muzei endorses their deal through their proxy networks in state house, we’ve learnt.

How The Grand Plan To Prematurely End Ruhunda’s Political Career Was Sealed:

We recently landed on information that aims at ending Ruhunda’s political career prematurely before 2021 general elections. Infact, in their dozier they claim MTN, through Daj communications has been the biggest financial sponsor for Ruhunda by giving him multi-billion juicy deals, which money he uses to keep himself at the top of his game politically.

The old man of the clan, together with his sister Muhanga allegedly convinced the son of late Muzei Amos Kaguta that if MTN was cut off from him, his financial prowess would significantly be in ‘red’, and that since they are his blue eyed bazukulu in Tooro, he should send a signal to the MTN CEO about the same. This information was well delivered to MTN CEO, not by Mwenda or Muhanga but through other networks, TheCapitaltimes can exclusively confirm.

In the plan, they tend not to take over all his dealership districts at one go, no, remember the Mwenda’s company is new in the business, so they will start by cutting two districts first as they gather experience.

Secondly, MTN set a high target for Daj that can’t be achieved thus will fully lead to cancellation of the contract,” an insider with in MTN intimated to this reporter.

Daj communication is known for popularizing the legislator as it employs over 1000 youth who turn into his political agents during elections.

Ruhunda is among the most prominent leaders Tooro has so far produced to the national level and some observers say the Government has always been worried about his political prowess, having tried to ‘immunize’ him severally in vain.