Trending
HomeNewsCovid-19 Crisis: When Is The Premier League Season Likely To Resume?

The Premier League remains halted as the coronavirus pandemic grips the sporting world and no clear conclusion is in sight yet.

Top-flight clubs have at least nine matches left to play of the 2019/20 season with plenty still to be decided.

While Liverpool are on the verge of clinching the title, the relegation battle and the race for the European places are still wide open.

The ongoing issues surrounding coronavirus has meant the Premier League has been put on hold and there are many questions up in the air. 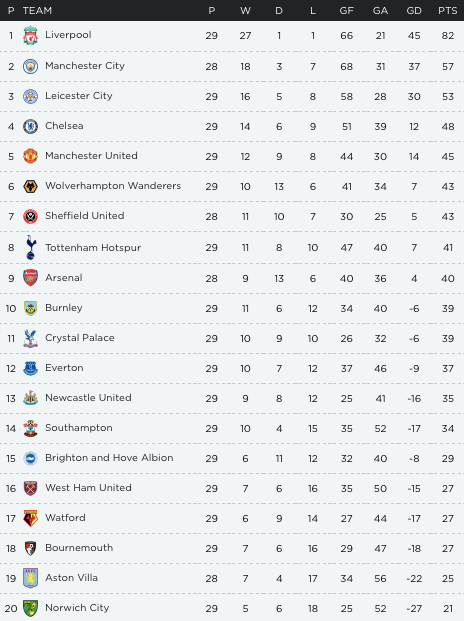 Premier League Table as it stands

When is the Premier League likely to resume?

After a meeting between all 20 clubs on April 3, it was announced that the Premier League will not resume in early May as previously planned.

The situation is clearly evolving day-by-day and it remains to be seen when the league will be able to get back under way.

The Premier League remain determined to complete the current season and avoid it being written off completely.

A league statement read: “The Premier League will not resume at the beginning of May – and the 2019/20 season will only return when it is safe and appropriate to do so.

“The restart date is under constant review with all stakeholders, as the impact of the COVID-19 pandemic develops and we work together through this very challenging time.

“The Premier League is working closely with the whole of professional football in this country, as well as with the Government, public agencies and other relevant stakeholders to ensure the game achieves a collaborative solution.

“With this, there is a combined objective for all remaining domestic league and cup matches to be played, enabling us to maintain the integrity of each competition.

“However, any return to play will only be with the full support of Government and when medical guidance allows.”

Will the Premier League season be voided?

The league are desperate to play the remaining games as the cost of cancelling it could be up to £1billion, according to chief executive Richard Masters.

Sky, BT and overseas rights holders have already paid the Premier League for their full season’s broadcast rights, despite a quarter of the campaign left to play.

So scrapping the campaign will mean broadcasters will look to recoup millions.

What could happen to the Premier League season?

One option to complete the season is a World Cup-style camp.

It has been suggested that clubs could gather in a neutral location to play out the remainder of the season behind closed doors, with only those personnel essential to staging and broadcasting the games allowed to attend.

It is understood this is one of many ideas under consideration, with the 20 clubs due to convene again by conference call this week.

There are a number of difficulties with the idea, not least how to deal with the necessity to have medical staff on hand during a public health crisis, and how the format could survive with even one positive Covid-19 test.

But the idea of multiple matches being televised on a daily basis throughout June and July, if the infection curve has flattened by then, could have some merit.