Mivule was unveiled by events promoter Balaam Barugahara at Eureka Hotel in Ntinda.

“I Basajja Mivule, therefore, announce my support to General Yoweri Kaguta Museveni in the coming presidential elections. I will support president Museveni until someone comes out to prove him wrong-until there comes a better candidate, I am going to support General YK Museveni,” he said.

“We sat in the meeting and I was told what I did was wrong. I was told the land grabbers are particular and not a tribe, I was asked to apologize to all westerners who are over 3 million people,” he said.

“Whoever wants to promote peace and harmony should apologize and that is what I did. But people started abusing me, throwing around vulgar words. Whoever is abusing is hidden in People Power, why don’t the People Power leaders come up to guide their people against such bad behavior?” Mivule argued.

Last month, Mivule was arrested and subsequently released from detention at the police’s Special Investigations Unit – Kireka on allegations of promoting sectarianism.

Upon release from SIU detention, Mivule described NUP supporters as bandits and hooligans and he is concerned by the way their leader does not own or disassociate himself from the reckless behaviors of his supporters.

“These are people who lack manners, so evident on how they practice abuse on cyber (social media platforms) characterized by the use of vulgar language, drug abuse, homosexuality acts amongst them. I want to stretch that NUP lacks competence in this field, with no fundamental structures, how will they run Uganda,” he explains.

He added that when one comes out to say that is not the language people should use in the struggle, NUP supporters invade the internet and attack you with every manner of obscenity.

“Is this the struggle you are talking about? I refuse to worship any other King in this country, I do not subscribe to Bobi Wine’s Kingdom where they are planning to install him as the omnipotent, omniscient, and only wise person. You talk about him, people want to cut off your head.  You talk about the president and there are no reprisals, so who is Bobi Wine really?” he asks rhetorically

While defending himself against negative reports that he had received cash from Museveni in exchange for his loyalty to Bobi Wine, Mivule said he had attended a meeting with some Banyankore, mediated by the Sisimuka Uganda chief wherein his eyes were opened to the fact that not all Banyankore were land thieves like he had previously painted them to be. 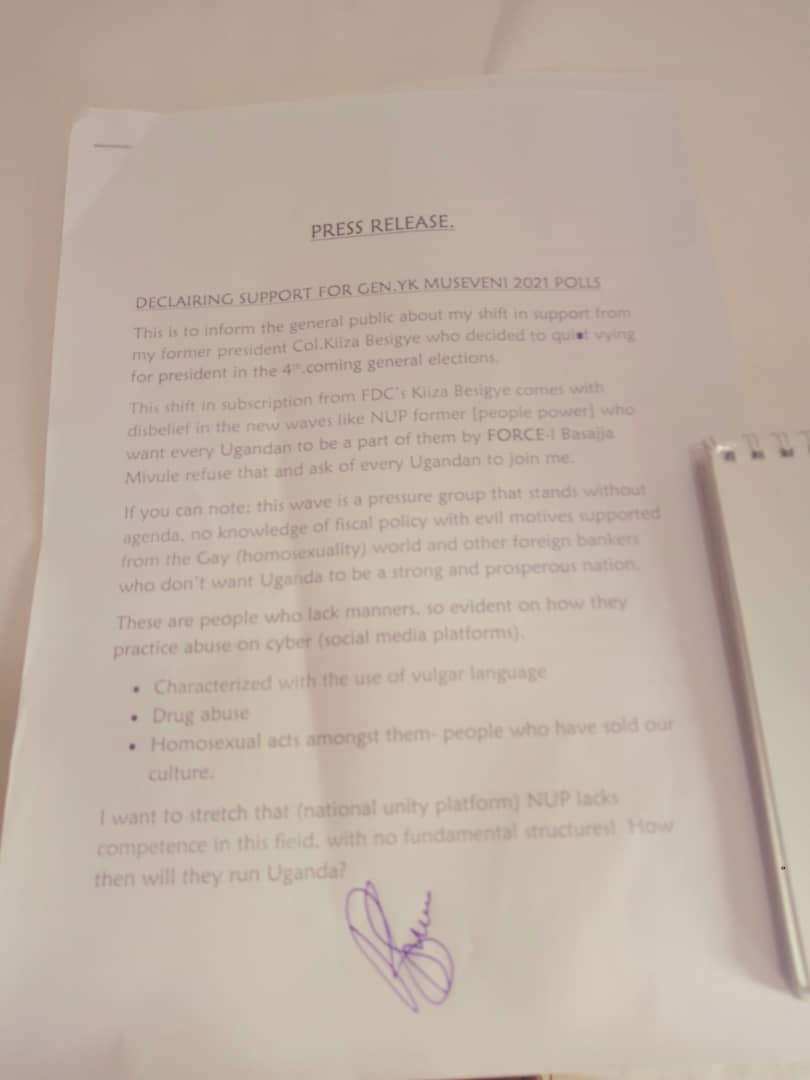 Mivule requested the president to hand him a car and fuel card in front of the press that will help him move around educating people in various ways of alleviating poverty amongst households in Uganda.

“I will not be intimidated by the weak that think that by making noise will shut me up, the false allegations made against me recently will not deter me. I speak for my children, the next generation ahead and for my country. It is on this note that I inform your Excellency YK Museveni that no amount of money can buy me, but through your son Balam Barugahara, support me with a double cabin pickup and fuel card,” he said

Mivule has since laughed Bobi Wine for losing an election to an NRM candidate in Kamwokya, where he grew up from.

“At a polling station in Kamwokya where Bobi grew up from, a NUP candidate lost to an NRM candidate, what does that indicate? Continue abusing people on social media,” he opined.

“No one can say Museveni has no support in the country. If he is rigging votes, then he starts somewhere because NRM swept the elections of youth in the entire country,” he said.

Mivule vowed that Bobi Wine will never be president of this country.