Officials at the Aga Khan’s Diamond Trust Bank (DTB) are headed for deeper trouble and are living in fear after a former manager, who was Bank’s Head of Fraud Prevention and Forensic Investigations, has joined the list of witnesses to pin the Bank in the Shs 120Billion fraud case.

The case, which is filed at the High Court Commercial Division, started after city businessman Hamis Kiggundu aka Ham, of Ham Enterprises Limited, sued DTB Uganda and DTB Kenya for debiting over Shs120Bn from both his Shillings and Dollar account without his consent.

On realizing the discrepancy, Ham wrote a letter to the Bank in November 2019 terminating the over 10-year relationship he had with DTB and demanded the bank to avail him with a forensic audit report of all the transactions on his accounts, although to date he has never received it.

We have since established that although some senior managers at the Bank are bent on covering up the scandal, they are set to be shocked after some of the current and former staff of DTB Uganda expressed their willingness to testify against their employer in the multi-billion fraud case.

On learning about the move, our insiders at DTB reveal that senior managers have since started sending threats and comping up with ‘cooked’ criminal charges against these staff, as a way of intimidating them from testifying in court.

It is said that the senior Managers at DTB who were involved in the multi-billion scam are worried that if their current and former staff testify and provide collaborating evidence against the Bank, chances are that many of them will be arrested.

This is because the witnesses will name and shame the specific managers who instructed them to unlawfully debit monies from Ham Enterprises’ Accounts by confessing how and when they carried out the fraudulent transactions.

It is said that the staff who are on the list of witnesses fear that if they don’t confess and name the bosses who instructed them to carry out the fraudulent transactions they will be the ones in trouble and chances of being arrested are high, since Ham’s lawyers have the capacity to track down the exact people who were handling his accounts and the period they did so.

Our sources reveal that on top of the list of witnesses is Mr. Clayton Lakony Omona, the former Head of Security, Fraud Prevention and Forensic Investigations at the bank.

Lakony, whose docket was responsible for having detected, reported and stopped the multi-billion fraudulent transactions before even Ham could do so, recently declared that he is ready to testify against DTB in court and reveal how the transactions were carried out.

Speaking to this website about the matter, Lakony said that; “I do not have any problem providing inputs towards resolving the disputes between Ham Enterprises and Diamond Trust Bank Uganda. I will therefore provide all the necessary support required from me.”

It is said that Lakony quit his position at DTB in April this year following a multitude of fraud scandals in the bank, which he alleged were being sanctioned by some members of senior management.

It should be noted however that his testimony will be a key determinant of the outcome of the court case, since by virtue of his office then he was in charge of, Fraud Prevention and Forensic Investigations.

But he said that having foreseen the would-be outcomes the fraudulent transactions at the time opted to resign so as to protect his integrity, professionalism and avoid the unpleasant results of such actions. 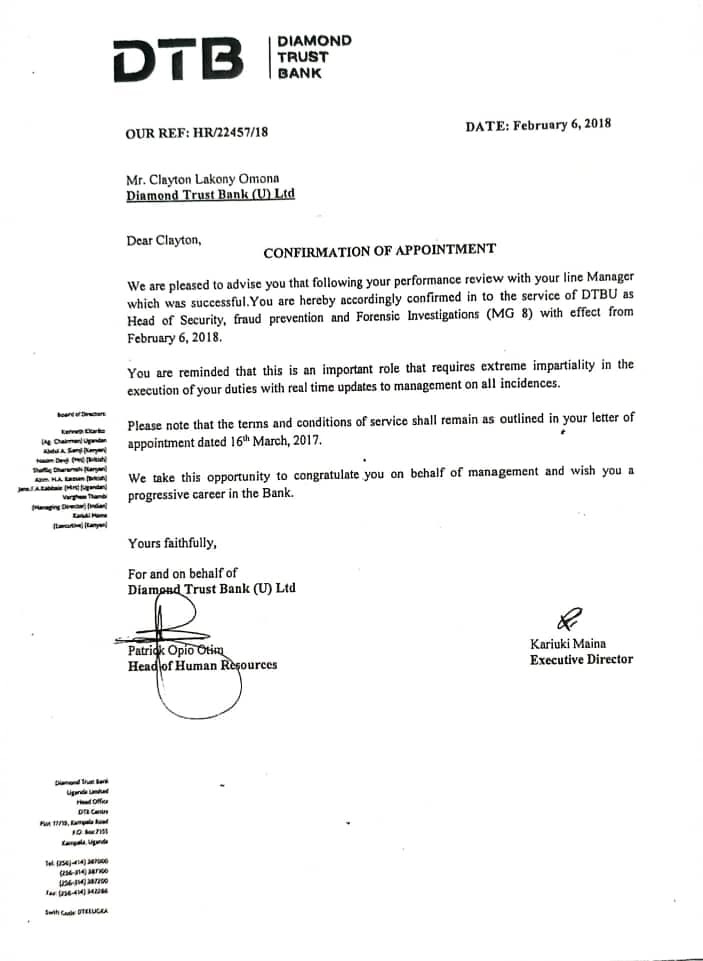 Lakony’s 2018 appointment letter, however he Quit the Bank earlier this year following an alleged multitude of fraud scandals in the bank

He revealed to our reporter that he is more than willing to assist the prosecution in providing the necessary support and documentation on purely humanitarian grounds, without being coerced or influenced by Ham Enterprises in any way.

Lakony contends that it is his wish that the banking sector in Uganda reforms to protect clients from such fraudulent acts, hence the wish to provide Ham Enterprises with all necessary support such that the case can be resolved and Ham recovers his stolen money.

According to documents tendered in court, Ham Enterprises has concrete proof indicating that DTB fraudulently withdrew over Shs34 billion and over USD23 Million from their shillings and dollar accounts respectively without the company consent or authority.

Bank statements for Ham’s accounts indicate that the fraudulent transactions had been going on during the 10-year banking relationship that they had operated those accounts at DTB.
But despite all the years Ham had been banking with DTB, the bank’s officials claim that they never detected the fraud that involved such colossal sums of money, until he raised the matter.

But Lakony is not the only person on the list of witnesses that are ready to pin DTB. He is actually witness number four on the list.

Also on the list is DTB group C.E.O Mrs. Nasim Devji and DTB Uganda Managing director Mr. Vargese Thambi, since they are directly answerable in the matter, since Ham Enterprises was a high profile client, Ham dealt directly with these top two bank officials.

Previous ArticleFamily Day Out? Yes! Go To La Cabana For A Delicious Sunday Kuku Roast At a Very Humble Price
Next Article ‘You Are Nobody To Stop NUP’s Activities’: Court Dismisses Application To Block Nomination Of Party Candidates