The long-standing license agreement dispute between Capt. Joseph C. Roy and Rhino Fund Uganda has come to an end after a meeting chaired by Hon. Minister Tom Butime of the Ministry Tourism Wildlife and Antiquities on 18th September 2020.

After having met with HE President Museveni and several meetings at the MTWA, finally the parties have managed to mutually come to an amicable agreement, which ultimately ensures the continuance of this Flagship Project, the Rhino breeding program and the safety of the rhinos on Ziwa Rhino Sanctuary. 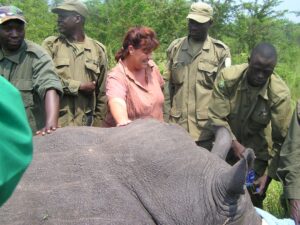 Mr Daudi Makobore, the Chairman of Rhino Fund Uganda states that we are all grateful and relieved at the outcome of this very long-standing dispute.  Both parties are looking forward to a positive relationship and the imminent growth of Uganda’s rhino population, which ultimately will lead to the release of rhinos into Uganda’s National Parks.

Sincere thanks go to His Excellency the President, his staff, the Ministry of Tourism, Wildlife and Antiquities, Uganda Wildlife Authority, Nakasongola District Local Government and leaders, Rhino Fund Stakeholders and well-wishers for assisting in and mediating this matter and securing the future of Uganda’s rhinos