Kampala mogul Dr. Sudhir Ruparelia is the new landlord of the expansive Simbamanyo House, which is situated on Lumumba Avenue opposite CPS building, after his Meera Company bought the building from Equity Bank.

Simbamanyo House originally belonged to city businessman Peter Kamya, who staked it as collateral security to Equity Bank in 2017 for a Shs11.5Bn loan, which he later failed to service until it accrued to Shs38.6Bn, prompting the bank to distress the property and later sell it to the highest bidders, in this case, Meera Investments Limited, which acquired the property at Shs18.5Bn.

This website has established that Equity Bank, through their lawyers of Katende Ssempebwa & Co Advocate and AF Mpanga, Advocates, sold the said building to Meera Investments on October 8th, 2020, and has since written letters to all occupants and tenants notifying them about the changes in ownership, barring them from paying any rent to either Kamya or Simbamanyo Estates. 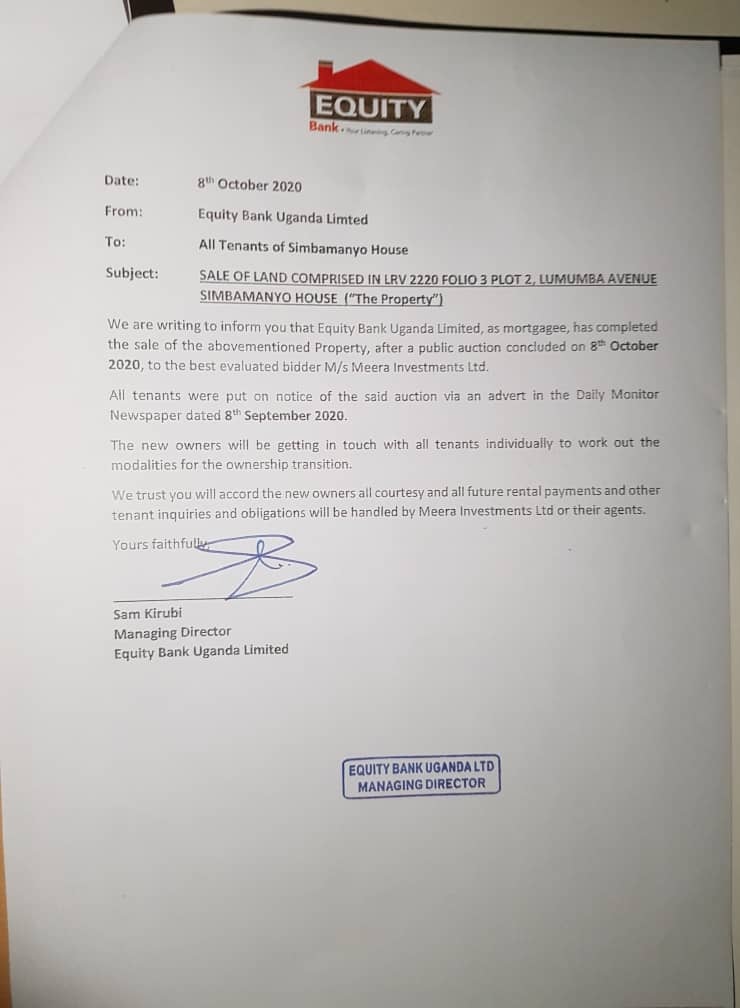 Besides Simbamanyo House, Kamya had also staked other properties located in Mutungo-Luzira, comprised in Afrique Suites Hotel, which were also distressed and auctioned by Equity Bank over the same loan.

Prior to auctioning the building to Meera Investments, Equity Bank published notices in Daily Monitor newspaper in August in which it said that Simbamanyo had until October 7 within which to pay at least 30 per cent of the disputed Shs38.6b, failure to do which it would proceed to sell properties against which the money was advanced.

But instead of serving the loan as agreed, Simbamanyo put a caveat on the disputed properties, claiming that Equity Bank was trying to upstage the court process in which it is challenging the sum in dispute and the legality of loans drawn from Equity Bank Kenya. The caveat was later quashed by court.

It should be noted that Simbamanyo Estate has for long been embroiled in a property dispute with Equity Bank Uganda and Equity Bank Kenya, which arose from non-performing loans that had been advanced to the real estate company.

Equity Bank issued the notice to auction the property following a ruling in which the High Court upheld Simbamanyo’s prayer to stay the sale of the disputed properties, which Equity Bank had indicated in two separate notices on August 7 and August 11 would auction to recover outstanding sums, only if the defaulters deposited a substantial amount with the bank in lieu of the loan.

So to Kamya’s dismay, court ruled that to prevent the intended auction, Simbamanyo had to pay at least 30 per cent of the disputed amount, which the estate later failed to pay, hence the auction.

Documents filed in the Commercial Division of the High Court, on August 20, 2012, indicate that Equity Bank Kenya and Equity Bank Uganda entered into a loan agreement in which the two banks agreed to advance Simbamanyo with USD6m.

Sources reveal that the loans, which would make up a consolidated sum of USD8.10m (Shs29.83Bn) including interest and operational fees, among others, sought to bankroll the construction of Afrique Suites Hotel in Mutungo, Luzira and finance the takeover of a prior loan advanced to Simbamanyo by Shelter Afrique.

But in his argument in court, Simbamanyo Estates challenged the outstanding sum, saying they were only aware of USD7.19m (Shs26.48Bn).

Simbamanyo Estates also accused Equity Bank Uganda of providing Equity Bank Kenya with an illegal cover to conduct business in Uganda where it has no jurisdiction.

They wondered how, according to court documents, Equity Bank Kenya and Bank One, which provided bridge financing of (USD10m) were drafted into the loan agreement yet Simbamanyo had never applied for any facility from the two banks let alone own a bank account in any of them.

In its defense, Equity Bank indicated that Simbamanyo benefited and was aware of every financial transaction that was advanced to it, hence liable to service the loan.

Equity also argued that Bank One, based in Mauritius, was drafted into the transaction on the request of Simbamanyo, which had sought to obtain bridge financing of up to USD10m.

Documents submitted in court indicate that Simbamanyo Estates sought to offset the outstanding sum in a November 16, 2017 letter to Samuel Kirubi of Equity Bank Group Kenya.

In the letter, Simbamanyo, acting through NISK Capital, sought to restructure the loan with a USD10m Standby Letter of Credit secured from Bank One.

Therefore, Equity argued that, Simbamanyo or its agent were fully aware of all transactions and the case it had filed in March was a “guise or scheme” to defer the performance of its financial obligation that it had since defaulted on.

Kamya, acting through Muwema Co Advocates and Solicitors argued that Equity Bank had breached contractual trust and engaged in unethical and illegal conduct but court trashed his argument.

With time Kamya and Simbamanyo Estates realized they were fighting a losing battle and it was not long before Equity Bank went ahead and sold the building to Meera Investments Ltd.

A letter from Equity Bank Managing Director Samuel Kirubi to all tenants and occupants, dated October 8th, 2020, copied to Simbamanyo Estates, which confirms the takeover of the building reads thus in part;

We are writing to inform you that Equity Bank Uganda Limited, as mortgagee, has completed the sale of the above mentioned Property, after a public auction concluded on 8th October 2020, to the best evaluated bidder M/s Meera investments Ltd.

All tenants were put on notice of the said auction via an advert in the Daily Monitor Newspaper dated 8th September 2020.

The new owners will be getting in touch with all tenants individually to work out the modalities for the ownership transition.

We trust you will accord the new owners all courtesy and all future rental payments and other tenant inquiries and obligations will be handled by Meera Investments Ltd or their agents.”

Meera Investments has also since written to the tenants on Simbamanyo house in a letter dated 8th October,2020, through CL Risk Management Services Ltd notifying them of the new changes. 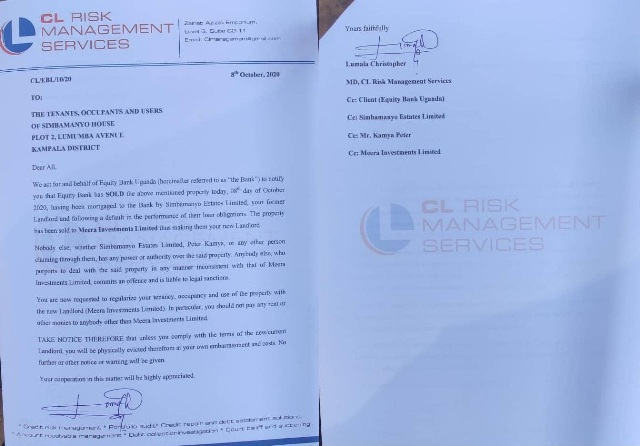