The Northern Uganda insurgency national memory and documentation centre received a boost today when Gen Coleb Akandwanaho a.k.a Salim Saleh and UPDF attended and toured a photographic exhibition of salient events that marked the conflicts in Kitgum town.

Accompanied by the UPDF former Joint chief of Staff Ambassodor Maj Gen Robert Rusoke, the UPDF Chief Political commissar Maj Gen Henry Masiko and other senior UPDF officers, Gen Saleh emphasized food security as the only way of boosting house hold incomes and attainment of complete peace. Gen Saleh said that having food in abundance for both consumption and sale will easily reflect how bad war is as compared to peace today.

Gen Saleh arriving at the centre 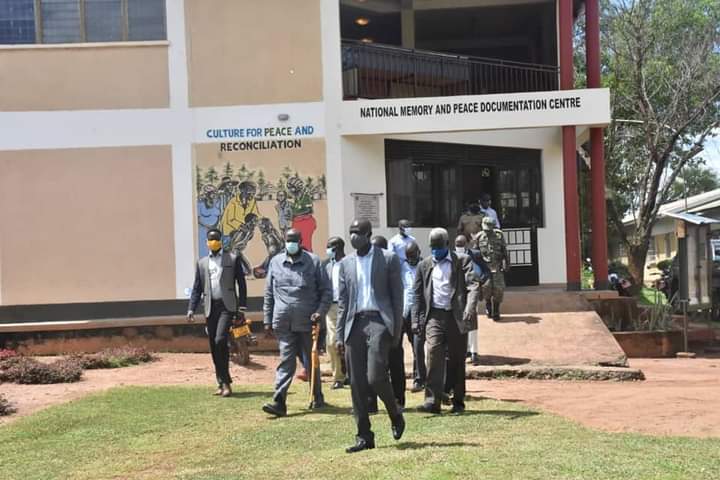 General Saleh chronicled the bad times when he was a commander in the northern insurgency and the efforts him and other senior citizens of northern Uganda made to end the LRA menace.

Showing him a photograph he took with a team that participated in peace negotiations with LRA by Rwot Oywak Ywakamoi who participated in the peace talks, the Operation Wealth Creation Boss and NRA war hero was mesmerized by how far northern Uganda has come from. He promised to keep the historic photo in his album as part of his history.

While paying tribute to Mr Muto P’Lajur the then photo journalist with monitor publication who documented the war moments, Gen Saleh lauded the now 68 years retired journalist for challenging the UPDF and him in documenting and publishing memories on the northern insurgency. He recognized the fact that although Mr Muto was recognized with a medal he will also request UPDF to build him a house in his home village Palabek where he will retire. He contribution ten (10) million shillings for starting the foundation of the house.

In his remarks, Mr Francis Nono, the Centre Manager -Refugee Law project remarked that the Centre is a museum-like war memorial that seeks to promote and celebrate Uganda’s heritage serving as a documentation and educational facility which integrates history, education, culture, remembrance and human rights into one space where memories live and Memorialisation interfaces with the past.

“The Centre is for past conflict memory and it helps the community and the general public on how best to correct what has happened for it never to happen again. it is the only history clinic that speaks about issues that is of direct concern to the victims and survivors of war” Mr Nono added. He requested for Support to the victims through various government programs like Operation wealth creation and a partnership with Refugee Law Project to develop the facility further through some materials and artefacts that speaks about what happened in the past

The UPDF Chief Political Commissar (CPC) who represented the CDF Gen David Muhoozi commended the timely commitment to partner with refugee Law project to preserve the memory of the northern Uganda insurgency and bring the centre to a national level involving all key state holders. He promised that the Centre through a memorandum of understanding may be part of the National Military Museum whose construction is to be commissioned soon as part of Army week celebrations in the greater Masaka region next year. The CPC added that UPDF could be having more information than the initiators have and therefore will ensure accurate and proper information without any distortion of facts for the sake of posterity.

The national youth chairperson Hon Lilian Aber while giving her remarks paid tribute to General Saleh as one of the living heroes who sacrificed it all for the good of Uganda. He pored glowing praise to the army for having a people face where a common person can freely interact and express oneself with the soldiers no matter the rank or appointment.

In the Memorandum with Refugee Law Project signed at the function, the two entities observed that posterity has a vested interest in the preservation of all events of conflicts in Uganda for purposes of learning lessons, fostering reconciliation and sustaining peace.

“Today’s function shall mark the beginning of close collaboration among all stakeholders in the Northern Uganda war, particularly the UPDF, the media and Religious leaders for purposes of jointly developing and harmonising the themes and narratives that shall be featured in the exhibition” read the memorandum in parts.

A joint committee is to be established comprising of the government representatives, Mr Muto Ono P’lajur and Key stakeholders to establish a standing joint mechanism for the implementation and review of the resolutions that were reached.

It should be noted that the idea behind the centre was conceived as a result of the Juba peace process especially the Government’s commitment on the issues of Accountability after the insurgency.