The Solicitor General has provided advice on the interdiction of the Chairperson Equal Opportunities Commission (EOC), Sylvia Muwebwa Ntambi.

His advice comes after the Director of Public Prosecutions (DPP) asked Ntambi’s Ministry, the Ministry of Gender, to throw her out after she has been charged with corruption.

The DPP feared that Ntambi’s stay in office would jeopardize investigations and therefore recommended that she is interdicted immediately.

This prompted the Permanent Secretary Ministry of Gender, Aggrey Kibenge to seek guidance from the Solicitor General whether the Ministry had powers to interdict her.

While Responding to PS Kibenge, the Solicitor General in his letter dated December 2, said Ms Ntambi is not a “public officer” as defined by the Constitution and as such, the provisions of the various laws on interdiction of “public officers” do not apply to her.

“Ms. Sylivia Muwebwa Ntambi is not appointed by the Public Service Commission but by the President, who also has the authority to revoke her appointment according to Section 6 of the Equal Opportunities Commission Act,” the Solicitor General added. 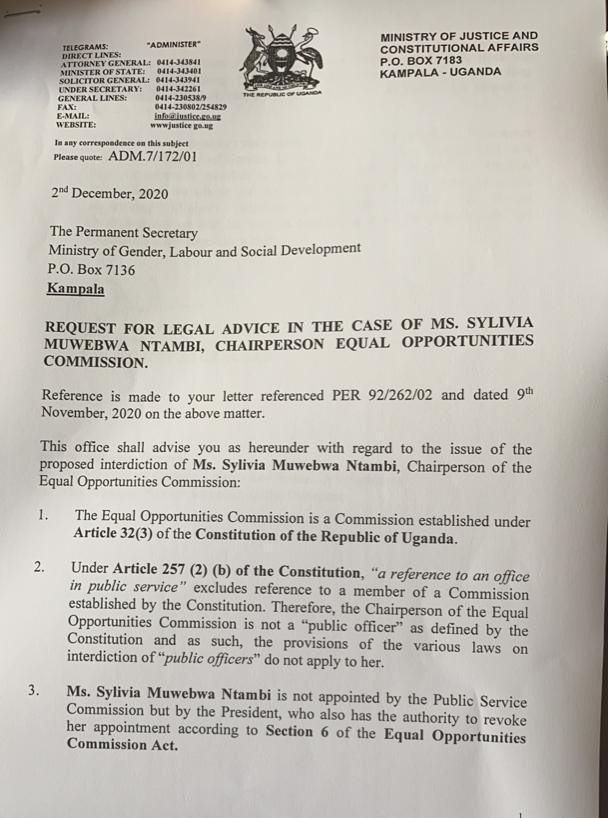 In his letter, the Solicitor General added that President Museveni is the appointing Authority, who has powers to suspend, reappoint or reinstate her as part of his power of appointment.

“Therefore, in response to your question, our opinion is that the Permanent Secretary of Ministry of Gender, Labour and Social Development does not have the power or mandate to interdict Ms. Sylivia Muwebwa Ntambl,” the Solicitor General added. 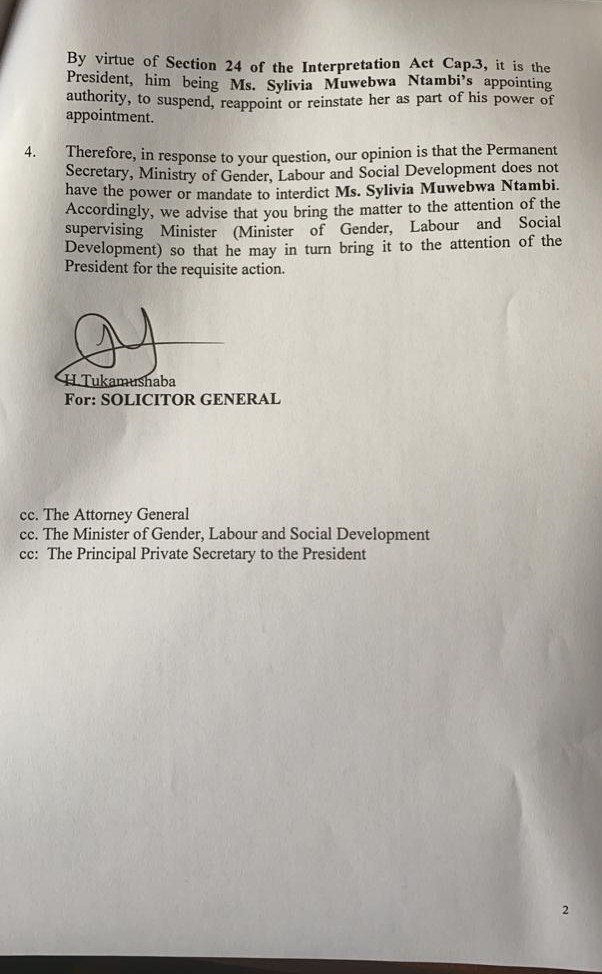 It should be remembered that last week, the Anti-Corruption Court Magistrate committed Ms Ntambi to the High Court for trial.

Ntambi also allegedly conspired with EOC employees to defraud the Government of sh44.5m. She allegedly committed the offences between July 2018 and April 2019 at the EOC offices in Kampala.

According to prosecution, the accused requisitioned, approved and forwarded the monies for payment, purporting that it was for conducting sensitisation activities in Karamoja and to undertake an audit exercise of the rural electrification programme in Uganda.

The money also, according to prosecution, was meant for developing a draft workplace policy on HIV/AIDS, monitoring exercise sensitisation on equity and rights issues in lower local governments, whereas not.

According to the prosecution, some of the accused allegedly received millions of shillings on their accounts and neglected their duty of accounting for it.

Since Ntambi took over the chairperson-ship of the commission, the whistleblower said Mrs Ntambi has unfairly dismissed over 11 staff, terminated over 10 staff contracts, and four contracts have not been renewed. In 2017/ 2018, the Auditor General advised the commission to employ people on permanent contracts however the chairperson declined and this has since led to financial losses.

They accused her of directing the collection of Shs100 million which they had approved in the commission meeting and the said money was to be used as kickbacks for individuals who worked hard for passing of the commission budget in 2018/19.

“It was paid and collected through individual bank accounts. It was collected and handed over to her at Kampala International University (KIU), Kansanga on 7th March 2019,” the whistle blower said. Despite being chairperson of the commission, Mrs Ntambi is averred to have forced her secretaries to pay her as consultant in production of various reports.

She is also accused of irregular approval of allowances of various members of the commission, using commission vehicle for doing private businesses, irregular recruitment of staff without embracing commission procedures. It is said that she illegally recruited Betty Namazzi, Juma Waira and Petau Isabirye Babirye.