A high ranking officer of the Uganda Peoples Defence Forces (UPDF) is accused by her family members of allegedly grabbing her late brother’s properties, leaving the widow and orphans to languish in poverty.

Lt. Col. Nyakaisiki Carol Basaliza, is alleged to have grabbed the property that was left behind by her deceased brother Maj. Francis Kasaija, who died on November 2, 2018, leaving the widow identified as Binega Passi and the orphans to suffer in abject poverty.

The estate Kasaija left behind that his sister has since grabbed includes land in Bakeebwa Village, Rwengaju Parish, Busoro Sub-county, Kabarole District. The late was entitled to gratuity and pension from the UPDF and he was operating a savings account with Centenary Bank which Col. Nyakaisiki Carol also took over.

According to Binega (widow), trouble started when Lt.Col. Basaliza acquired letters of administration for late Maj. Kasaija on January 11, 2019, only three months after the passing on of his biological brother. 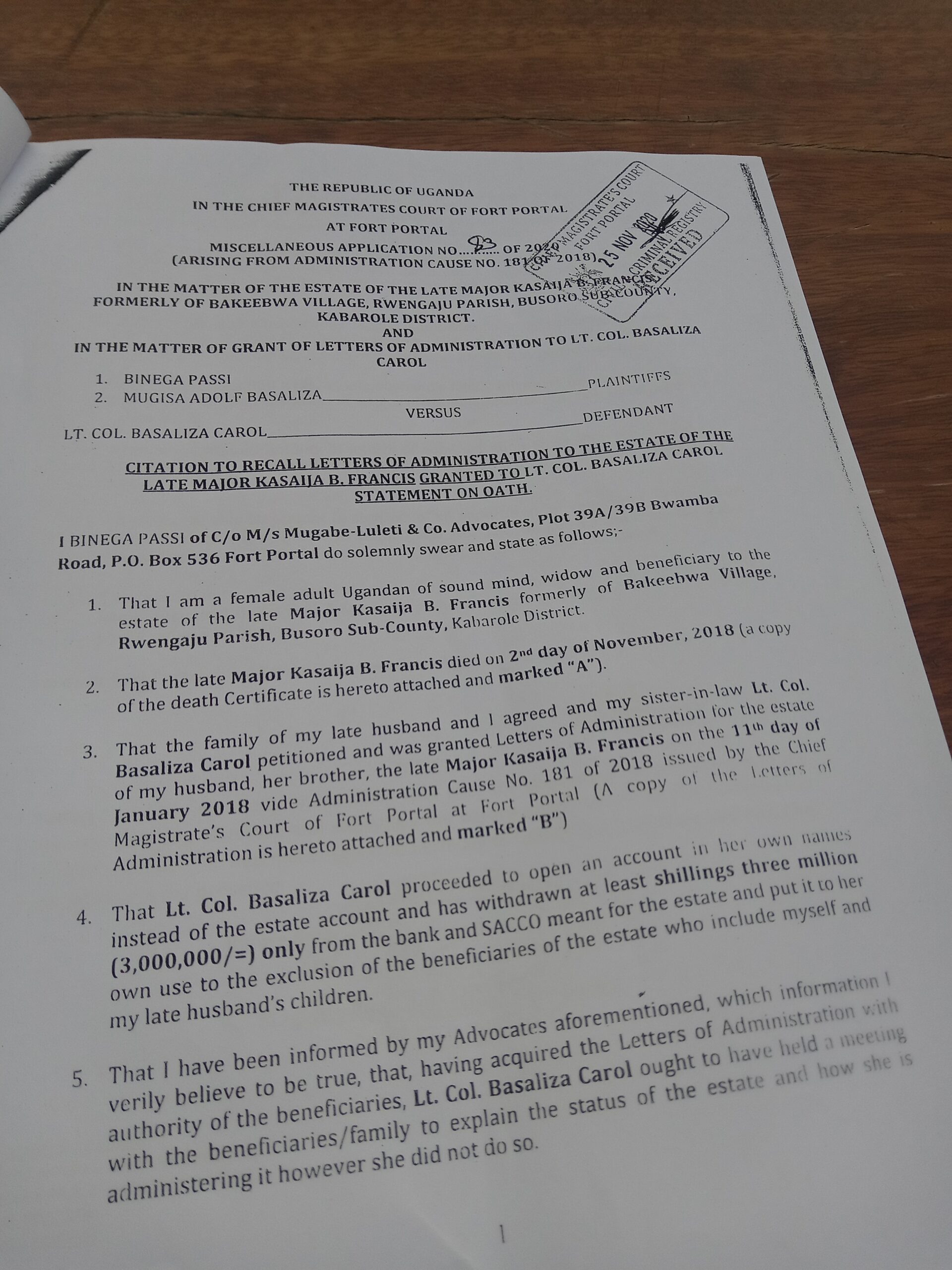 Besides that, the Widow also states that Lt. Col. Carol went ahead and opened up a personal account on which she receives money from Maj. Kasaija’s UPDF Wazalendo SACCO savings and to date she has withdrawn over Shs3,000,000 without remitting the same to the family. 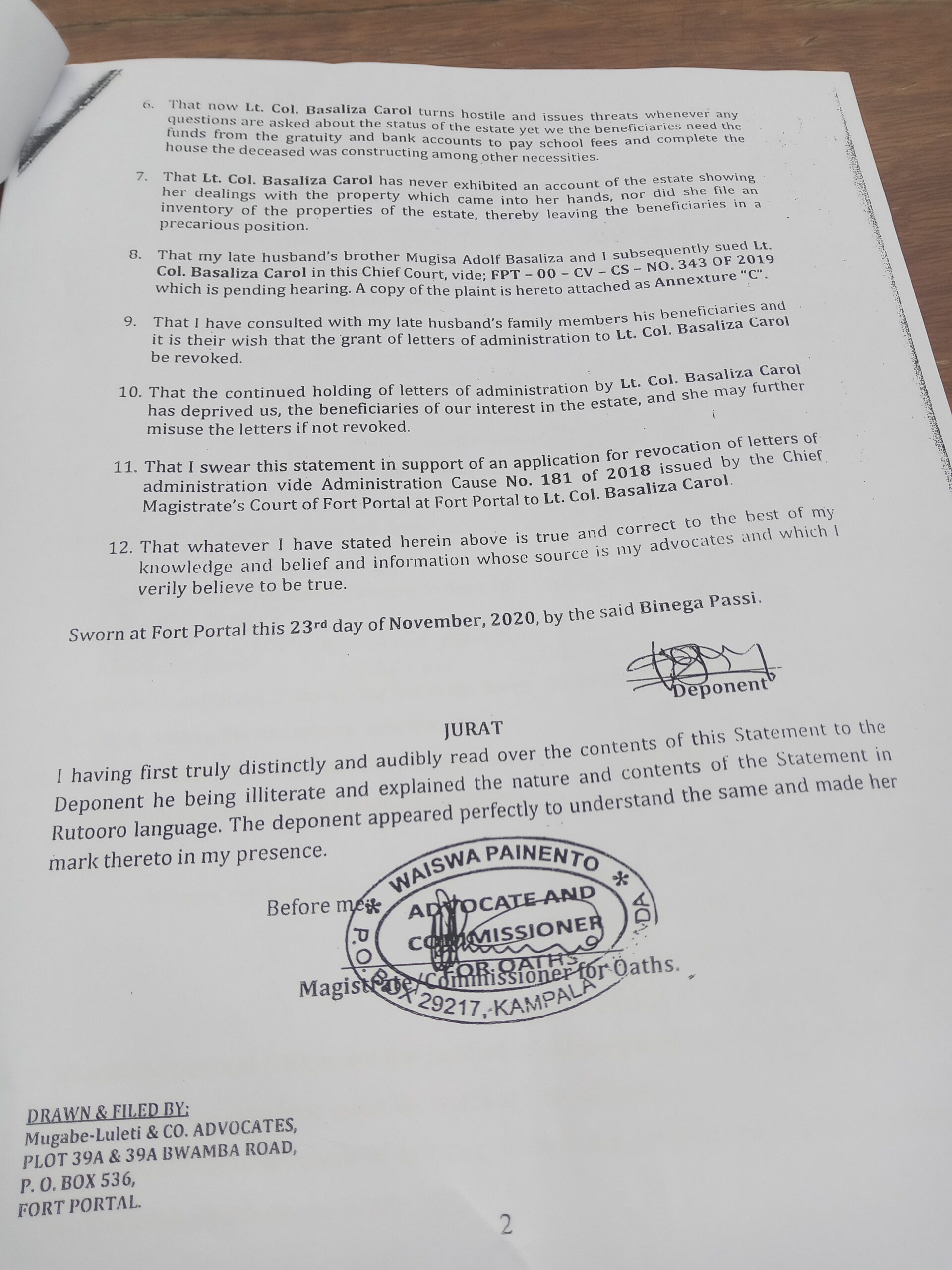 The Widow’s statement reads in part

The family have since petitioned the High Court in Fort Portal, vide FPT-OB-CV-CS-No.243 of 2019 and Administration Cause No. 181 of 2018, praying to court to revoke Basaliza’s powers of attorney and letters of administration of Maj. Kasaija’s estate.

They aver that from the start, Col. Carol Nyakaisiki did not convene a family meeting after acquiring the letters of administration and to date has never declared the contents therein or the exact inventory of late Kasaija’s estate as required by the law. 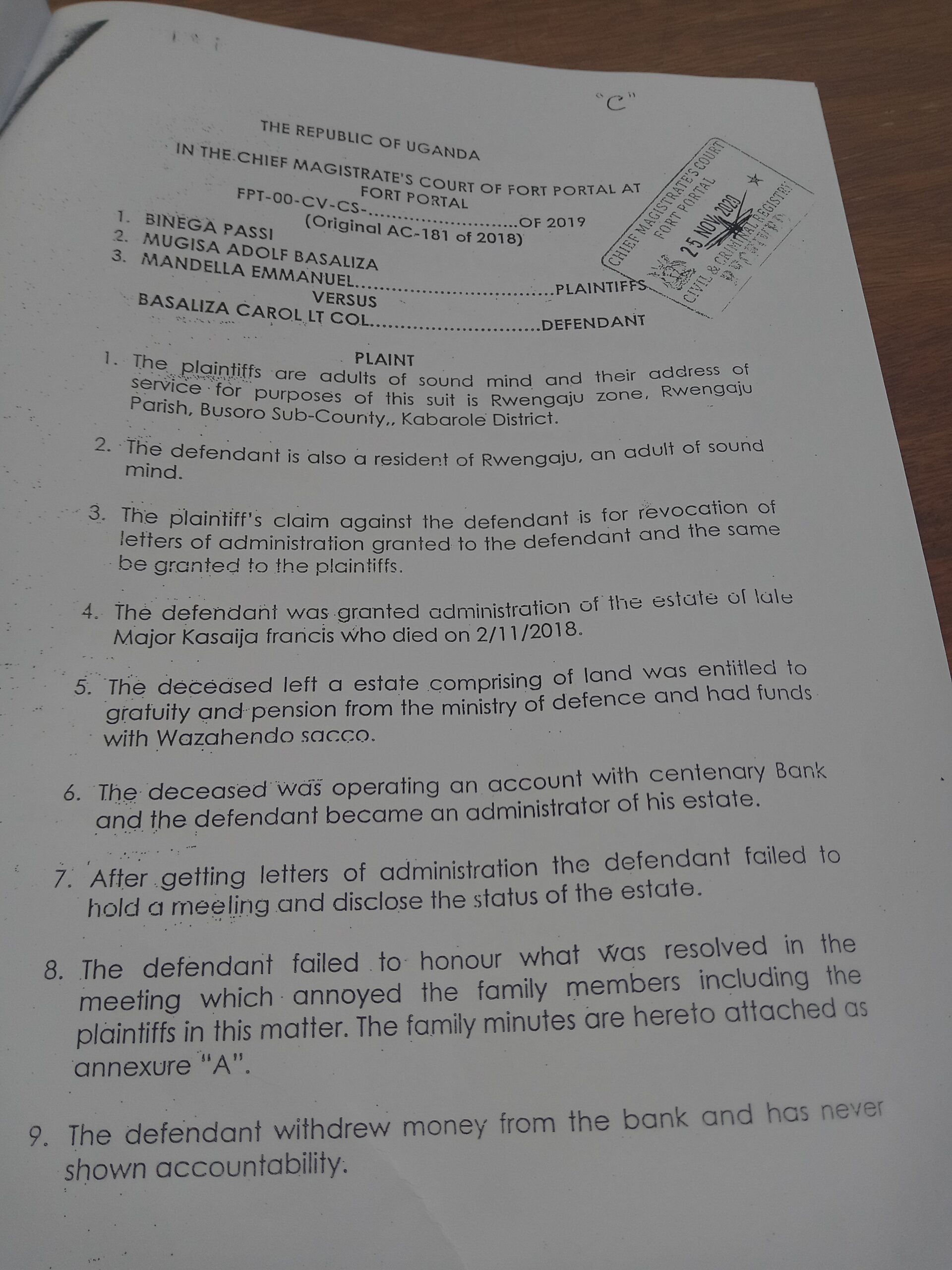 The family’s petition reads in part

Worse still, according to Binega is that the defendant turned hostile whenever she is asked about the matters pertaining to Maj. Kasaija’s estate. 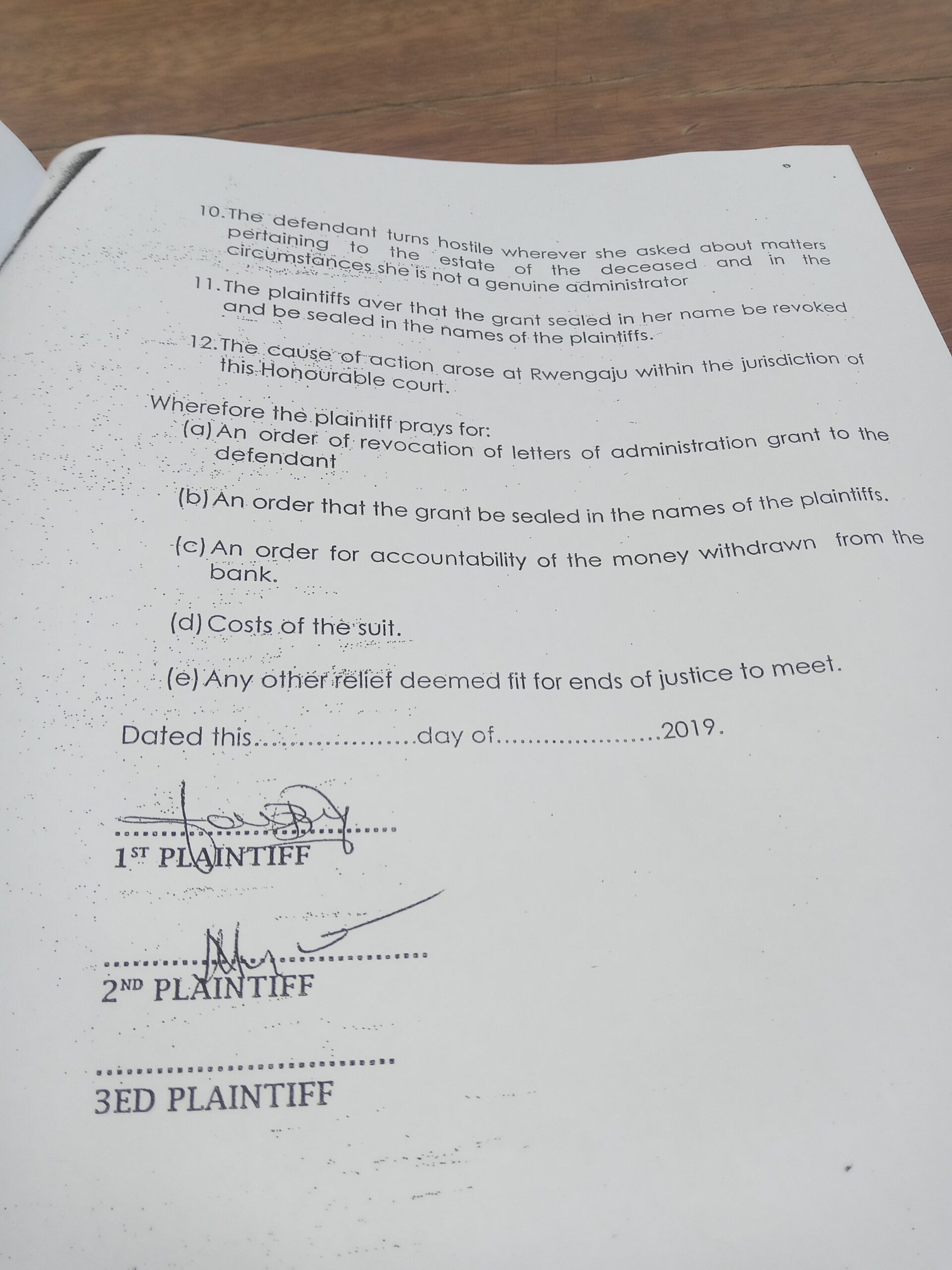 The family’s petition reads in part

They thus seek an order of revocation of letters of administration granted to Lt. Col. Basaliza, an order for accountability of the money withdrawn from the bank and any other relief deemed fit for ends of justice to meet.

This website has learnt that Lt.Col. Nyakaisiki Carol has since been summoned to appear in court on February 22, 2021, when the case is scheduled for the final hearing, during which she is expected to defend herself. 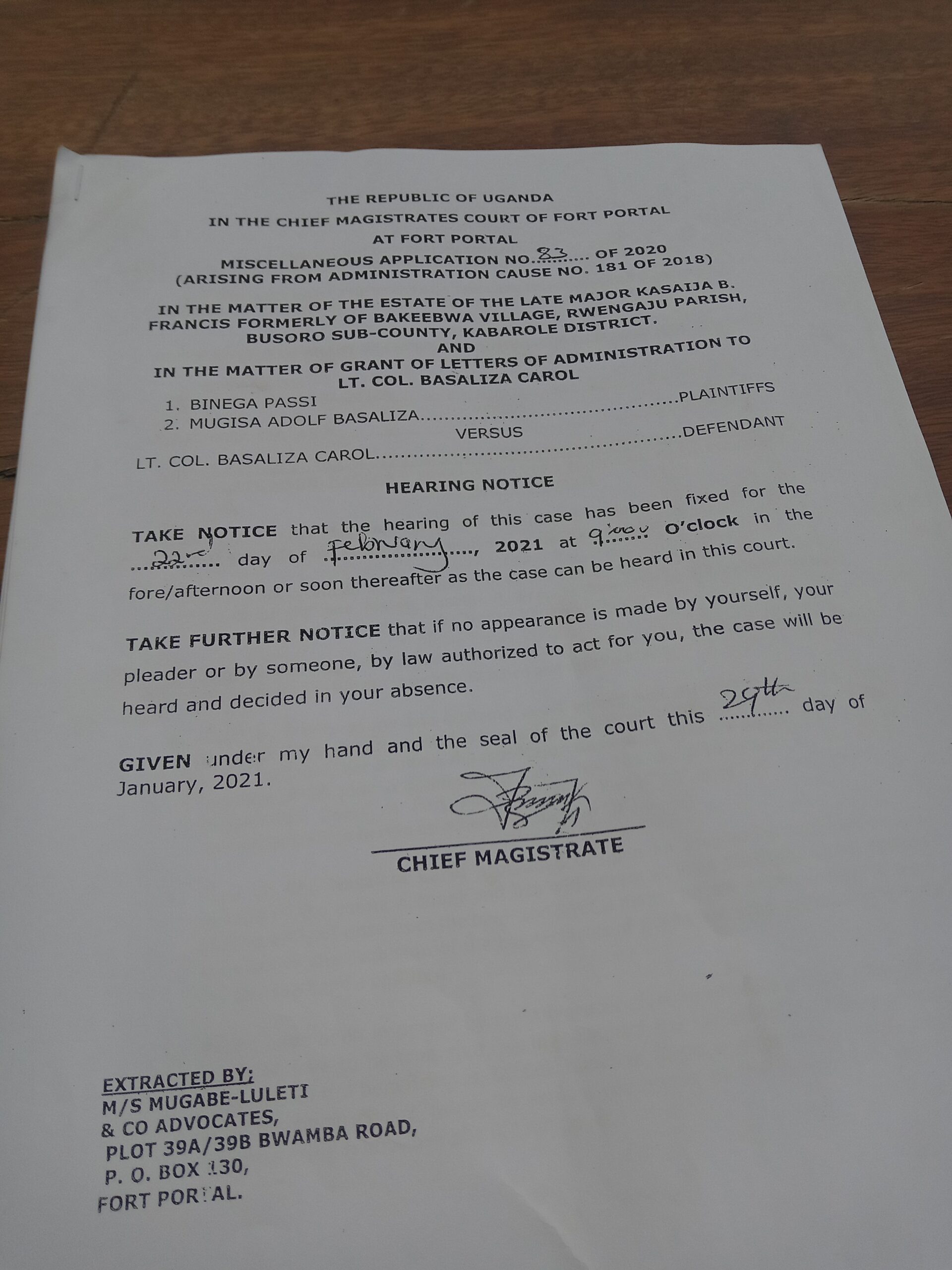 Court has further warned that if no appearance is made by Col. Carol herself, her pleader or by someone, by law authorised to work on her, the case will be heard and decided in her absence.