President Yoweri Kaguta Museveni has seen through the interdiction of two senior officials of Rural Electrification Agency (REA) with immediate effect in a Presidential order through the Anti-Corruption Unit led by Lt. Col. Edith Nakalema.

According to a letter dated April 12th 2021 and signed by President Museveni, the two officials John Turyagyenda and Godfrey Werikhe are accused among other many cases of soliciting for bribes from investors whose companies had been awarded contracts to provide services to Rural Electrification Agency.

Reliable sources further addressed us that, President Museveni’s efforts to bring to book the officials has been frustrated by the Minister and her Permanent Secretary, Mr. Robert Kasande persistently sabotaged any attempts to apprehend Mr. Godfrey Werikhe, the Deputy Executive Director and his junior Mr. John Turyagyenda, the Manager Projects Management and Designs.

It should be noted that Chairman of Rural Electrification Board, Mr. Kasande – who doubles as PS Ministry of Energy has been disregarding all efforts by Government Agencies such as Internal Security Organisation (ISO) and Inspectorate of Government (IGG) which had advised to have the two officers who have been solely in charge of technical operations at the electrification agency removed.

In the president’s letter dated April, 12, 2021, President Museveni said that he regretted that despite his earlier directive, the Minister of Energy has reknewed the contract of the two men yet a report had already been presented to him about their illegal dealings. 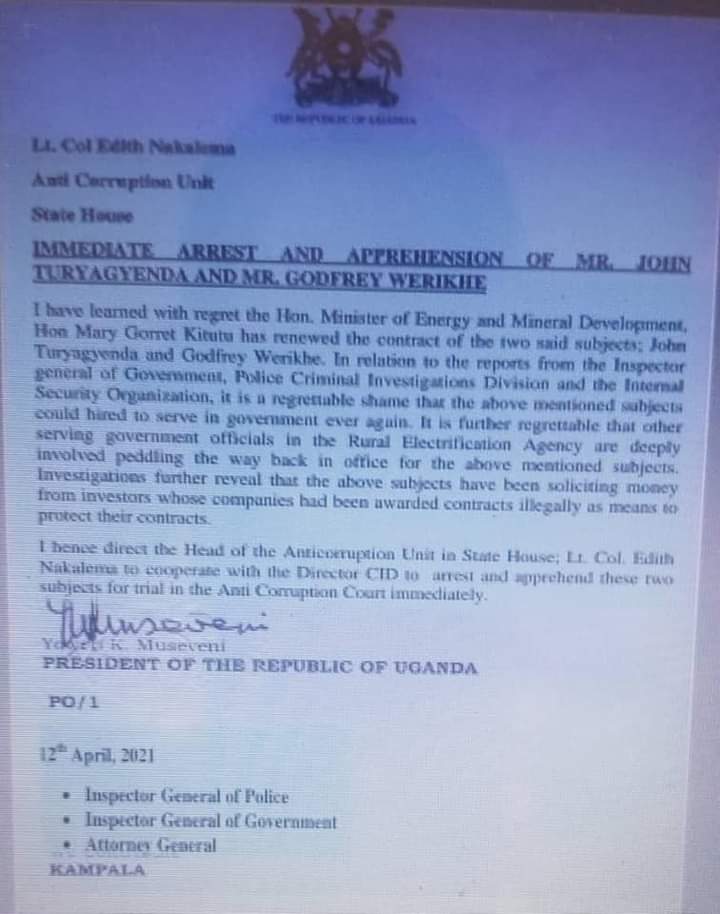 An investigation report by the Office of the Inspectorate of Government addressed to the Chairman of REA Board Mr. Robert Kasande who also doubles as the Permanent Secretary in the Ministry of Energy on 17th January 2020 found the two officials Mr. Godfrey Khaukha Werikhe the Deputy Executive Director in charge of Technical Operations and Mr. John Abouf Turyagyenda, the Manager Project Designs Management and Implementation to have caused massive financial loss and exhibited total negligence by ignoring supervision of the contracted projects leading companies not to meet compliance and required international standards.

While the report of the IGG fully implicates Mr. John Turyagyenda and Mr. Godfrey Werikhe for causing financial loss and negligence, the IGG watered down this report by sending these culprits for further disciplinary by the non-existence REA Board. It is non-existing in the sense that during the reigns of PS Kabagambe Kallisa and former Minister Eng. Irene Muloni, they devised a strategic plan to leave the Executive Director with responsibilities of administration and staff welfare. Here, the position of a Deputy Executive Director in charge of Technical Operations was created but he was also empowered to answer to the Board Chairman. This creation moved Mr. Turyagyenda to become the fulcrum of the corruption in the agency since he was the overall supervisor of all contracts and payments for projects would be only approved by his team answerable to the Deputy Executive Director and with the nod of the PS/Chairman of the Board.

By presstime, efforts to speak to Lt. Col. Edith Nakalema were still futile as her number was unreachable