The High Court in Kampala presided over by Justice Susan Abinyo has on Friday, August 30 dismissed with costs, an application in which the proprietors of Simbamanyo Estates Limited had sought to halt the transfer of it’s prime properties in Kampala which was meant for Equity Bank Ltd to recover outstanding loans worth $10.8 million (about Shs40 billion).

According to Justice Abinyo’s ruling delivered by e-mail, Simbamanyo Estates did not present to court acceptable grounds for court’s consideration to halt the orders of the Registrar Commercial Court, issued on February 17, 2021.

An earlier ruling by the High Court had also dismissed issues presented by the proprietors of Simbamanyo Estates, trying to save the estate that was sold to Meera Investments Ltd, through public auction.

Following the ruling, Equity Bank lawyers will now have to file a bill of costs to be approved by court.

Justice Amanyo confirmed that stopping the sale would have infringed the Bank’s right to be heard and also inconvenienced those who prepared for the auction which was advertised on September 8 fixing the sale date. 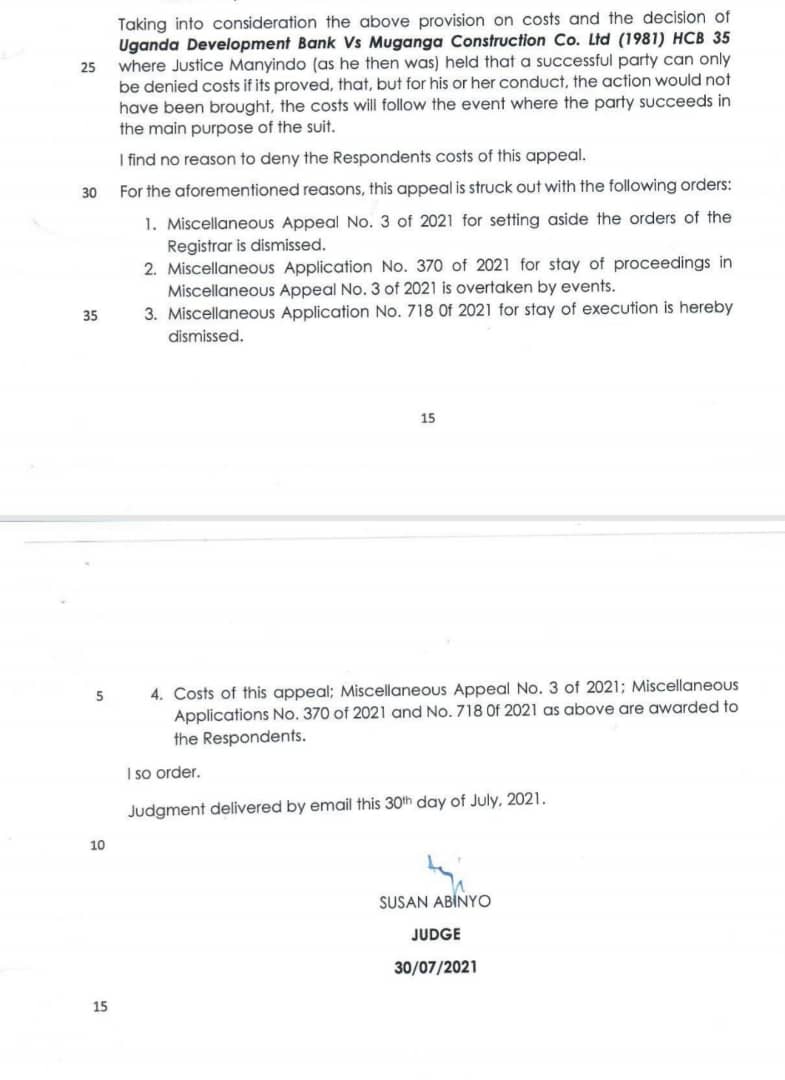 On October 8, 2020, Simbamanyo Estates filed an application seeking for express orders to stay the sale of its properties which took place on the same day. but shortly thereafter withdrew the case.

According to Court records, the bank sold Simbamanyo building housing among others the ministry of gender on Lumumba Avenue and Afrique Suites Limited, a four-star hotel at Mutungo Hill, Nakawa Division on the same day but shortly thereafter, Simbamanyo Estates withdrew the case.

However, in February 2021, Kamya went to court, seeking to reinstate the case, but was ruled out of time on February 17, 2021, by Deputy Registrar Lillian Bucyana. Kamya then changed lawyers and went to court again, with Miscellaneous Application No. 224 of 2021, challenging Bucyana’s ruling.

In the appeal, in which Equity Bank is jointly sued with Meera Investments Limited, Luwaluwa Investments and the Commissioner of Lands, Kamya asked the court to not only dismiss Registrar Bucyana’s ruling but also reinstate the original case challenging the sale, that had been abandoned in October 2020 as well as award him costs.

But in the latest defeat for Kamya, Lady Justice Susan Abinyo today dismissed his appeal, this time because the lawyers representing him did not present written instructions to represent him, as is required by law.

In preliminary objections, lawyers for the accused submitted, among others that Peter Kamya’s lawyers- Gad Wilson of M/S Kakuru & Co Advocates and Njoroge Githinji Martin of Wameli & Co. Advocates were incompetently representing the businessman and the affidavits sworn by them were defective.

They also argued that the position of the law is that an affidavit is defective by reason of being sworn on behalf of another person without showing that the deponent had the authority of the other and therefore “in the absence of any authorization, the affidavit is incurably defective.”

In her ruling, the presiding judge agreed with the respondents’ lawyers that both the affidavits deponed by Mr. Gad Wilson and Mr. Njoroge Githingi were defective.

“In the result, I find that this appeal is incompetent and not proper before this honourable court as the defective affidavits render the appeal incompetent. Accordingly, the preliminary objection on a point of law by the Respondents is upheld,” he ruled.

“This appeal is liable to be struck out as required under Order 6 Rule 29 of the Civil Procedure Rules on ground that it has been disposed of on a technicality rather than on merit,” she further ruled. 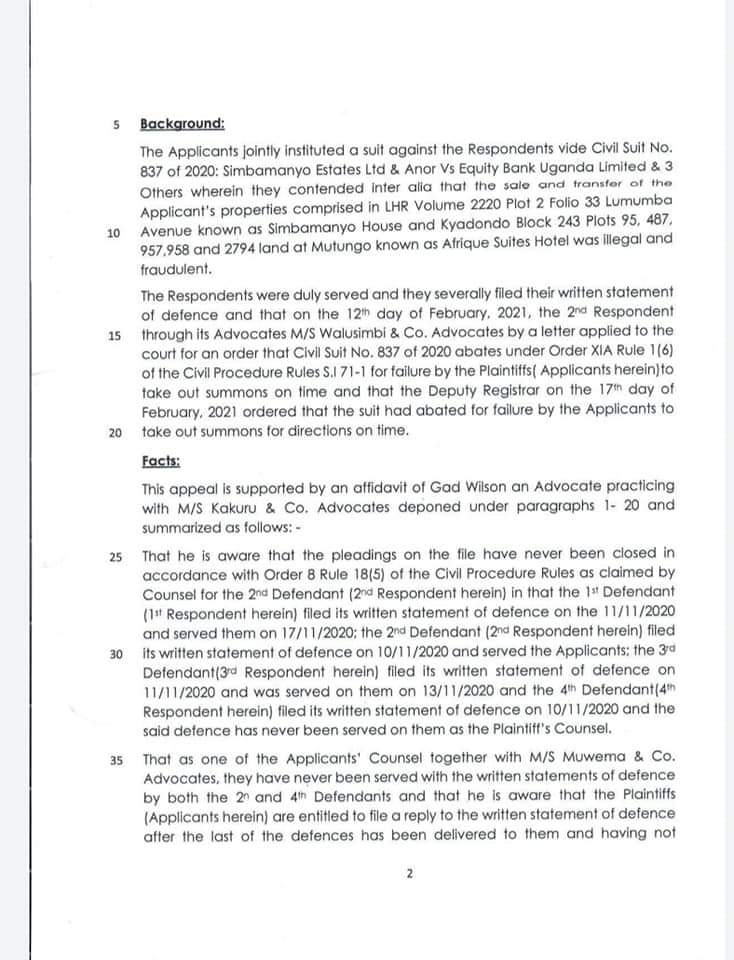 Regarding costs, she also ordered that: “I find no reason to deny the Respondents costs of this appeal.”