The Uganda Development Cooperation (UDC) has refuted the allegations and claims which were recently presented by one of the Members of Parliament claiming the company constructed 1KM of road at a whooping shs 5.5bn which they claimed was the most expensive Road in the World.
Hon Mwine Mpaka who is also the Committee Chairperson on Transport and Tourism while addressing the press at Parliament said UDC used shs 5.5bn to construct 1KM of road which he said was extremely expensive and wastage of tax payers money. 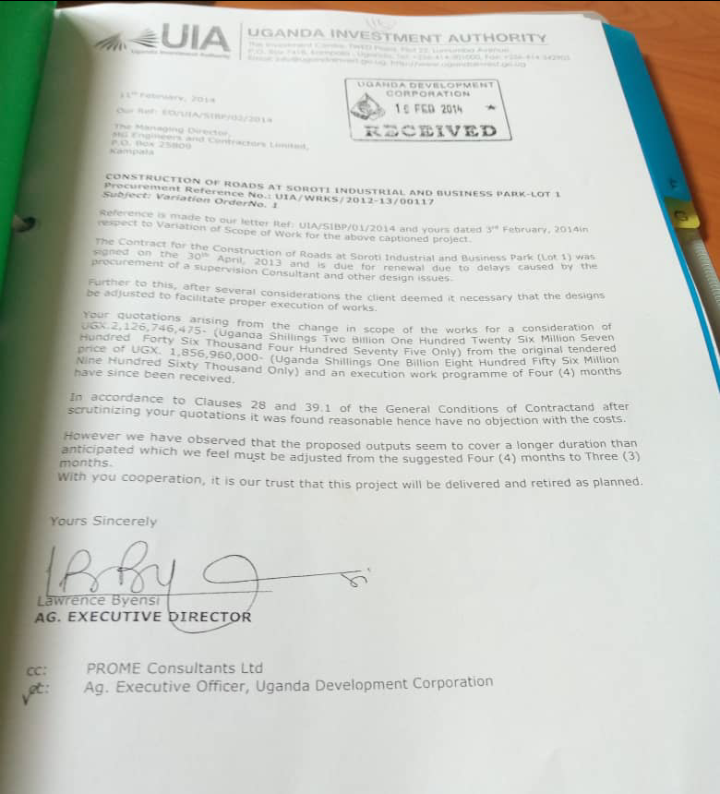 However, the documents which UDC tabled before Parliament and which this investigating Online Company has clearly seen show that the amount which MPs said was not correct.
According to documents seen by this Company, the road was in question only cost shs 2.126 bn and not shs 5.5bn as stated by Hon Jonathan Ebwalu.
The documents further showed that UDC did not construct nor Contracted any company to do the work. documents clearly show the road was constructed by Uganda Investment Authority (UIA) but UDC only provided funds. It is further stated in the documents that in December 2012, UDC signed a Memorandum of Understanding with Uganda Investment Authority to construct the priority Road in Soroti Industrial and Business Park.
“Uganda Investment Authority being the owner of Soroti Industrial and Business park is desiorus of constructing priority roads to serve the industries in the said park but did not receive fund allocation from Government to do so,” Reads part of the MOU.
It further adds that the priority Roads to be constructed were Tamale Industrial Park measuring 1.7KM and Pineapple Lane 0.22KM. The MOU adds that UDC agreed to provide funds to UIA to construct the roads in the industrial park up to tarmac Finish.
“Uganda Investment Authority shall procure a contractor to carry out the Construction works in the priority Roads in Soroti Industrial Park,” Adds part of the signed MOU.
It was further stated that UIA will supervise the construction of the roads and account for the funds received from UDC accordingly and even make sure that the construction is completed by 30th May 2013. The documents further showed in UIA in 2013, also contracted M/ S MG Engineering and Construction Limited to construct the said priority roads in Soroti fruit Factory.
On the Construction of Perimeter wall fence when Hon Ebwalu said UDC spent shs 2.5bn was also not true. Documents which we also obtained show UDC only spent shs 733m not shs 2.5bn as said. The documents also show that UDC in 2014 Contacted Wills International Limited which later did the work.
When Contacted Executive Director UDC Dr Patrick Birungi on phone for his comments, he said UDC tabled documents before Parliament showing the exact amount of money that was spent on both Roads and Perimeter wall construction.
“Am not going to reveal how much was spent but if you want clear information just go as Parliament,” he said adding that what Hon Ebwalu said was not true.
Dr Birungi further said that priority roads were not constructed by UDC but by Uganda Investment Authority as the institution responsible for Industrial development.
He says that by the time MOU was signed, procurement and project development started, he was not in office.
“By the time I was appointed ED UDC, the procurement and Construction were done and files already archived. Even my predecessor found them done already. So I really have little information,” He says as he put off his phone.

Previous ArticleJust In: Bobi Wine Deported From USA Over Strange Mission
Next Article Don’t Miss Live Music With A Taste Of Mongolia’s Healthy Foods At Kabira Country Club Every Friday