Yoweri Bukano, 32-year-old man from Busoga was attacked by people believed to be FDC supporters in the 2010 presidential campaigns and since then, he has been needing support to walk, seat or perform simple tasks since his spinal cord was damaged.

Bukano who was still a student in 2010 was attacked with sticks while he pinned President Yoweri Museveni’s campaign posters in parts of Masindi town. 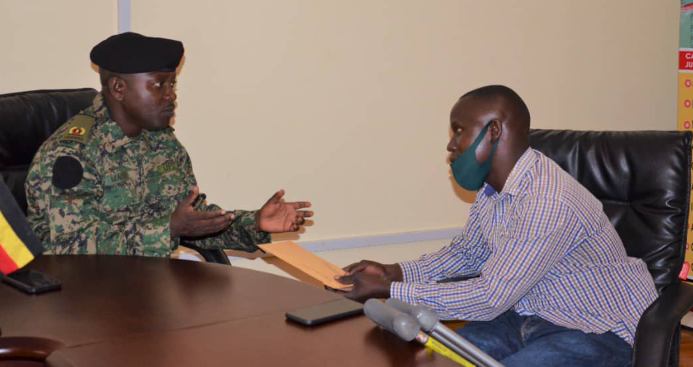 As a result of the attack, Bukano moved around hospitals but he could not get a solution to what was to become permanent disability.

Since then, he has been appealing to well-wishers to support his routine medical care at a facility in Nsambya.

But because financial support is not easy to mobilize, Bukano decided to reach out to Gen Muhoozi Kainerugaba whom he requested for Shs2.4 million to help him purchase orthopaedic callipers that support his legs.

Gen Kainerugaba was touched by Bukano’s story and offered the money through Maj Chris Magezi, the Director of information at the Land Forces headquarters and the office of the senior presidential adviser for special operations.

During their interaction, Bukano told Maj Magezi that his doctors had told him that beyond three years from the time of the ‘accident’ the condition cannot be medically reversed.

“I thank Gen Kainerugaba for his support. It was swift since the request was made about eight hours ago,” Bukano said.