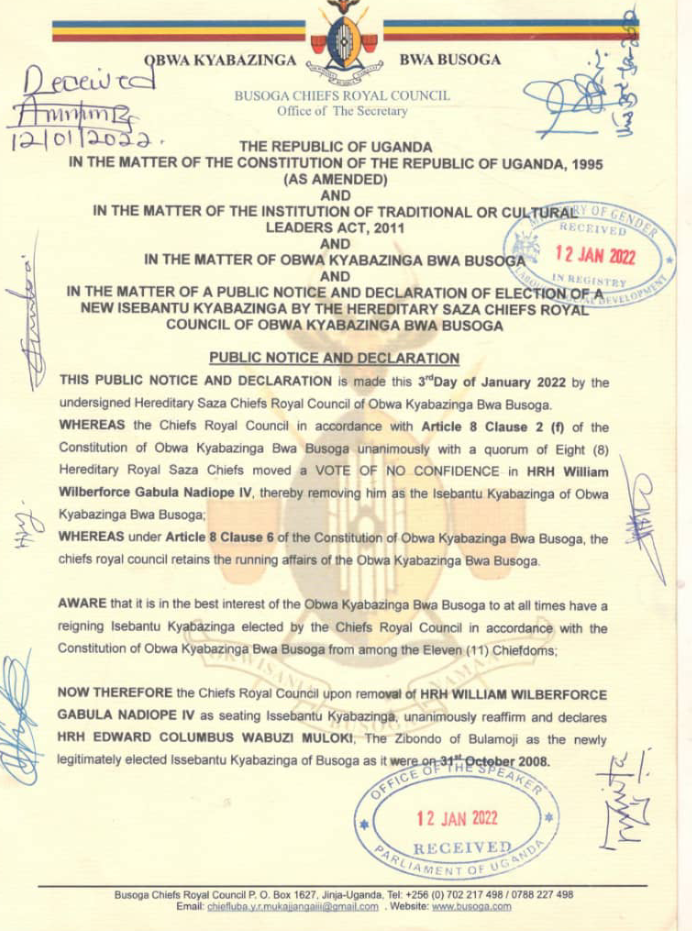 The notice partially states, “WHEREAS the Chiefs Royal Council in accordance with Article 8 Clause 2 (f) of the Constitution of Obwa Kyabazinga Bwa Busoga unanimously with a quorum of eight (8) Hereditary Royal Saza Chiefs moved a vote of no confidence in HRH William Wilberforce Gabula Nadiope IV, thereby removing him as the Isebantu Kyabazinga of Obwa in Kyabazinga Bwa Busoga.”

It’s from the above background that the Royal Council replaced Nadiope with Columbus; “Now therefore the Chiefs Royal Council upon removal of HRH William Wilberforce Gabula Nadiope IV as seating Issebantu Kyabazing, unanimously reaffirm and declares HRH Edward Columbus Wambuzi Muloki!, The Zibondo of Bulamoji as the newly elected Issebantu Kyabazinga of Busoga as it were on 31st October 2008.”

However, some Nadiope’s subjects say they’ll not respect ‘Kiro Kitwala Omunaku’. “How can we respect Kiro kitwala omunaku? We’re working normally here at the palace there’s nothing like a change of King here. The document is of no consequence,” a source said.

Infact, another source attributes all this saga to inner fights between Nadiope and Columbus;

”The last Busoga Kingdom Kyabazinga who was Muloki was from the house of Muloki, so Columbus can’t succeed because our King is supposed to come from among the five princesses of Bunyoro. That’s why even the Busoga Kingdom’s Kyabazinga when he is being inaugurated the King of Bunyoro has to come and carry out some rites so this time it took so long because of those fights between Columbus and Wilberforce but eventually, even the council of elders realised it had to go back to the house of Nadiope which rightfully did, and it went back to HRH Gabula Wilberforce. So this current Kyabazinga Nadiope is genuine and should be right there instead of fighting him.”