Emerging details on how Dr. Louis Kasekende is yearning for his contract renewal as Deputy Governor at Bank of Uganda are still leaking besides him denying allegations.

Dr. Kasekende’s contract ends on January 13, 2020 but it hasn’t been extended as he so wished thus clearing his office of personal belongs as he awaits for the decision on whether he would be granted another contract or extended.

Our Spy has landed on Kasekende’s letter dated January 3, requesting the finance minister Mr. Matia Kasaija to help him renew his contract at BoU.

However, sources close to the appointing authority, say he will be replaced by Prof. Waswa Balunywa, the Makerere University Business School Principal, a longtime ally of the president. 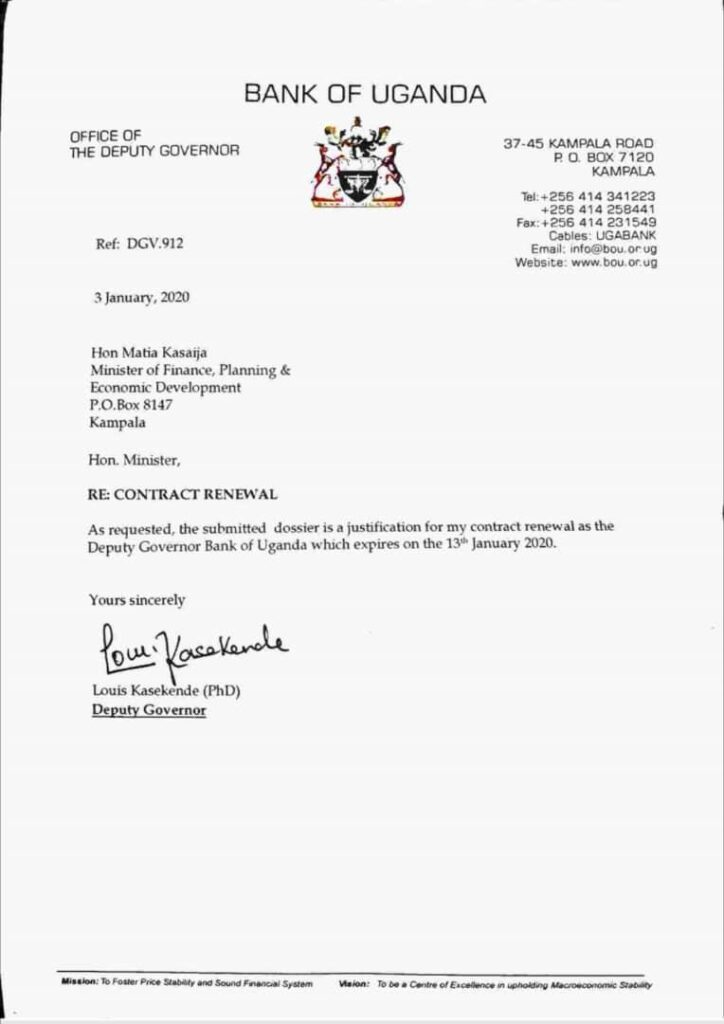 Kasekende’s letter to the Finance Minister

Recently, Finance minister Kasaija told The media that “he could do nothing about Dr. Kasekende’s contract” as the matter is before the president.

“I cannot act either way without the president giving me a blessing. Ideally, the president is the minister of Finance,” Mr Kasaija was quoted.

Surprisingly, President Yoweri Kaguta Museveni has since shown no indication of renewing Dr. Kasekende’s contract, taking a back seat in the jungle, where he is trekking with Bazzukulu, despite a reminder from the Finance Minister.

Hurting Kasekende is, during the Christmas break, the President met amiable MUBS Principal Prof. Balunywa, praising him as a good manager who has offered good direction to MUBS.

Museveni has been considering the next leadership changes at Bank of Uganda following a series of inquiries into the management of the central bank, first by Parliament and later by President Museveni’s State House Anti-corruption unit headed by Col. Edith Nalakalema.

It should be noted that Kasekende has been running BoU for years under the veil of his frail boss Governor Emmanuel Tumusiime Mutebile.

Due to Mutebile’s deteriorating health condition, the responsibility of the efficient running of the central bank rested on Dr Kasekende’s shoulders for the last 10 years and firing him now would create a deep void in BoU management, according to business analysts.

Dr. Kasekende was appointed deputy governor in January 2010 as Mutebile started showing signs of tiring and old age was catching up with him.

The term of governor and deputy is for five years, which means Kasekende has already served two terms and has vast experience in the management and operations of the Central Bank.
He should have used this to drive BoU into the right direction. In fact, the opportunity came around 2015/16 when Prof Mutebile was bedridden, and Kasekende was fully in charge of the Bank of Uganda.

Unfortunately, Kasekende’s name has in the past showed in various scandals that BoU ha been cited in Chief among those is the dubious winding up and sell of Crane Bank, which was announced by Bank of Uganda as a regulatory control move.

However, its effect on the economy was mammoth with many business people hitting a dead end as Crane Bank was their last resort in running their day to day finance operations.
Then, Crane bank was sold to DFCU bank by BoU, a move which turned out catastrophic and has haunted the managers of the central bank to this day.

Parliament’s Committee on Commissions Statutory Authorities and State Enterprises (COSESE) who investigated and unearthed a rot at Bank of Uganda had called for an immediate swoop at BoU.

COSESE noted a number of inconsistencies key among them, the declining performance of the Central Bank, closure and sale of the defunct Banks without any inventory or documentation and grossly undermining the legal procedures of bank closure by the Central Bank.

Even the managers of Dfcu bank are cursing why they ever bought Crane Bank and inherited its assets and liabilities. Currently, Dfcu Bank has since closed all its branches which they had opened up in buildings previously leased  by Crane Bank from Meera Investment LTD.

Both the Auditor General and Parliament have pointed out several regulatory and management errors in the procedures taken in closing not only Crane Bank, but also the other defunct commercial banks, which were closed under Kasekende’s eye. It was hard to believe that directors admitted to selling banks, for example, on telephone or Whatsapp messages.