According to reports, government officials are in a crisis meeting to prepare how to prevent the locusts that have ravaged several parts of Kenya, from spreading to other parts of Uganda.

“I have called an emergency meeting of relevant political leaders& technical officers @OPMUganda at 7pm tonight to immediately swing into action with the preparedness interventions we have been planning to deal with #DesertLocusts,” Prime Minister, Dr Ruhakana Rugunda said in a Sunday tweet.

Mr Martin Owor, the Commissioner Disaster Management Office of the Prime Minister, had earlier said that the Amudat District agricultural officer had reported that the locusts were about 4 kilometres away from the Kenya-Uganda border. 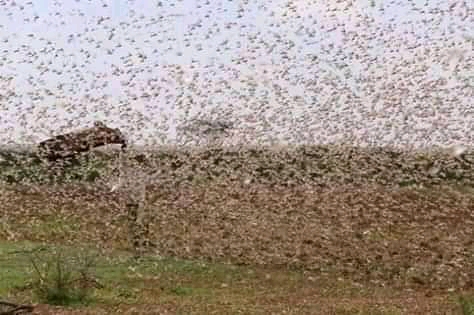 Latest reports show that the deadly insects were spotted in several parts of Amudat District  at about 2pm on Sunday.

Reports say that the locusts entered Uganda via North West Pokot in Kenya, where they have destroyed hundreds of acres of vegetation.

He said the locusts are still in Okorikeya and Loro villages.

Mr Masokonyi Waiswa, the Amudat District chief administrative officer, said that his office is compiling a status report to the Ministry of Agriculture.

“Right now, the Prime Minister has convened a meeting today at 7pm to prepare a team that will take action,” he said.

Desert locusts, according to United Nations Food and Agriculture Organizations (FAO) have destroyed vegetation in Kenya as they move toward Uganda.