The government of Rwanda has asked Uganda to deal with allegations of Ugandan hostile forces towards Rwanda, before the border at Gatuna/Katuna can be opened.

This, according to a communication from the 4th Quadripartite Summit of Luanda, that took place on Friday, was the recommendation of the meeting.

Presidents Museveni and Paul Kagame met on February 21st to discuss the reopening of the border point a year after it Kigali closed it.

The Summit which was facilitated by Presidents Joao Lourenco of Angola and Felix Tshisekedi of DR Congo was preceded by the two countries setting prisoners from either side free, as well as Uganda revoking the Ugandan passport of a Rwandan national Charlotte Mukankusi, at the request of Rwanda.

According to the communication from the summit, recommendations have been made of what has to happen before the border at Gatuna/Katuna is reopened and business returns to normal, and both Rwanda and Uganda signed an extradition treaty. 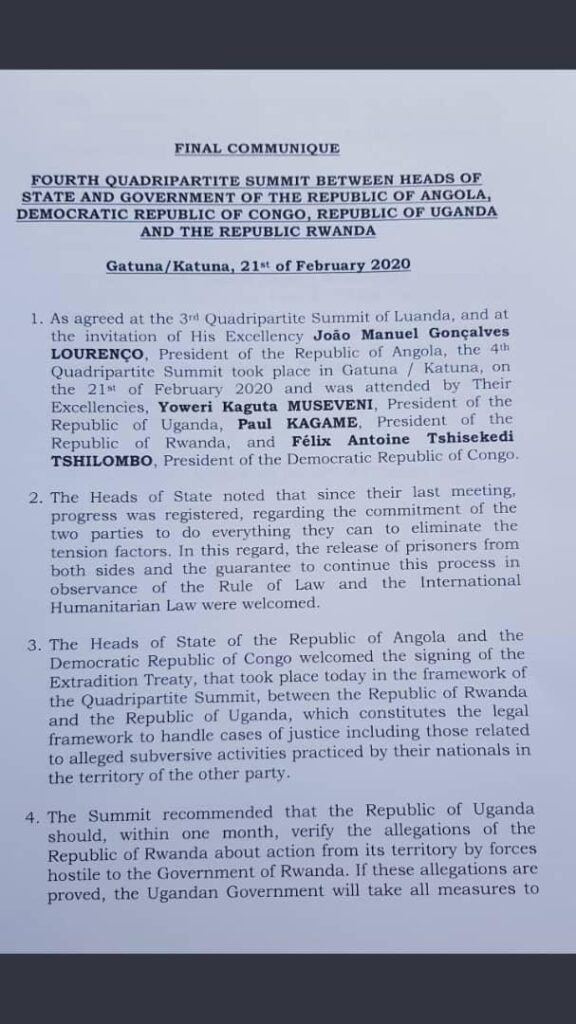 A Copy of Gatuna resolutions in part

Consequently, the Summit recommended that the Republic of Uganda should within one month verify the allegations that there are forces in Uganda hostile to the government of Uganda. It was also agreed that “If these allegations are proved, the Ugandan Government will take all measures to stop it [the hostility]from happening again.”

The communication also stated that the action must be verified and confirmed by the Ad-Hoc ministerial Commission for the implementation of the Memorandum of Understanding of Luanda. 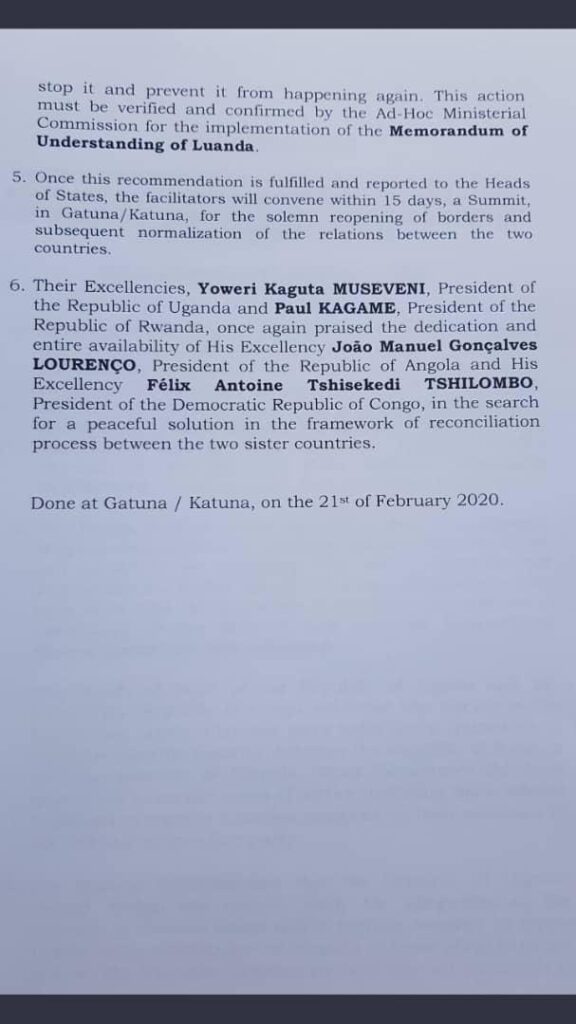 Part of the Gatuna Border Dialogue resolutions on paper

It was also agreed that once this recommendation is fulfilled and reported to the heads of states, the facilitators will meet again within 15 days at a summit in the same place for the reopening of the borders.

Prior to the meeting that took part for most of the day, both countries had set demands, with Rwanda asking that arrests of its citizens stop and suspected rebels are handed over, while Uganda asked that Rwanda stops espionage and provocative public comments, as well as release Ugandans in detention.