Bruno Fernandes coolly rolled in a penalty for his first goal for Manchester United to set his new team on its way to a 3-0 win over relegation-threatened Watford in the Premier League on Sunday.

Man Utd claimed three points at home to move into fifth, a possible Champions League spot, after comfortably defeating Watford 3-0 at home. It was a great showing by Bruno Fernandes and he gave United the lead in the 41st minute from the spot after being felled by Ben Foster. That came after an open first half which saw both teams have good opportunities to score.

Watford thought they had levelled in the 53rd minute from a corner after Dawson hit the post and then Deeney followed up. However,the VAR spotted the ball hit Dawson’s left arm and the goal was chalked off. Just five minutes, Martial all but killed off the game when he spectacularly chipped Foster after being denied initially. Then, 15 minutes from time, Greenwood countered from his own half and hit a thunderbolt in off the bar after playing a one-two with Bruno Fernandes. It ended up being an easy win for the hosts, but it was much more even in the first 45. 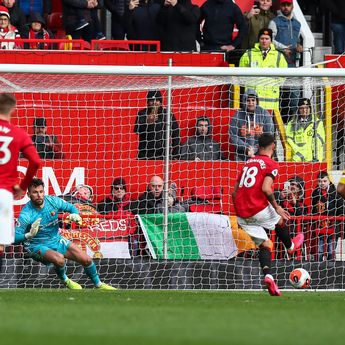 United were shaky in defence early on and Deeney could have scored in the fourth minute after a mix-up, but Shaw got back to dispossess him. Doucoure also had a clear chance nine minutes laterafter Hughes and Deulofeu combined before Doucoure was unable to hit the target from a tight angle. The Hornets then had their clearest opportunity after half an hour whenDoucoure shot at De Gea’s near post and the keeper made a fine save to his right.

Solskjaer’s men could have scored as well, but most of them were not very threatening. Greenwood hit at Foster inside 10 minutes before Wan-Bissaka hit the sidenetting on the rebound after James’ cross-come shot was parried by the goalie. However,just before United took the lead, they picked up. James hit wide of the goal and then Fred inexplicably hit off target after brilliant link up play.

When United hit the front, it was no surprise and it was the new man who made it. The Portuguese was played in after a lovely pass and the goalkeeper brought him down. Martin Atkinson had no hesitation in pointing to the spotand Fernandes took a hop and a step before sending Foster the wrong way. That lifted the home team and Fernandes nearly made it two before the break, but he hit it wide of the goal. In the second half, United looked to be in control, but then Watford struck.

Up the Reds! 🔴#MUFC #MUNWAT

An error by James led to Watford winning the ball back and forcing a corner. From the resulting set piece, the ball struck Dawson on his left arm and then the post before Troy Deeney beat Maguire to the rebound to score. The goal was given initially, but the VAR spotted the handball and United dodged a bullet.

Martial made it two after Fernandes passed him the ball, he saw his first shot saved and then he chipped the keeper after waiting for the right moment. It was plain sailing for United after that. Maguire nearly scored, but he headed a Fernandes cross wide and then in the 75th minute, United caught Watford on the counter. Greenwood ran 40 yards before passing with Fernandes before Greenwood finished the move in emphatic fashion.

There was no way back for the Hornets after that. Deulofeu hit the junction of post and bar as they looked for a consolation, but United nearly made it four, but substitute Ighalo was denied by a combination of Masina and the post. Ighalo came on to face his former club as part of a United triple sub which also saw McTominay return from a long term layoff.

The game ended with United playing out time and a party atmosphere. The home side fully deserved the win and they move into fifth, a possible Champions League place depending on what happens with Man City’s appeal. Watford, on the other hand, were well beaten and they remain second bottom.