The suspects were arrested from areas of Mulimira and Kamwokya and are currently detained at Tuba Police station on charges of being in Possession with suspected stolen motorcycles and spare parts .

Some of breaking instruments and spare parts 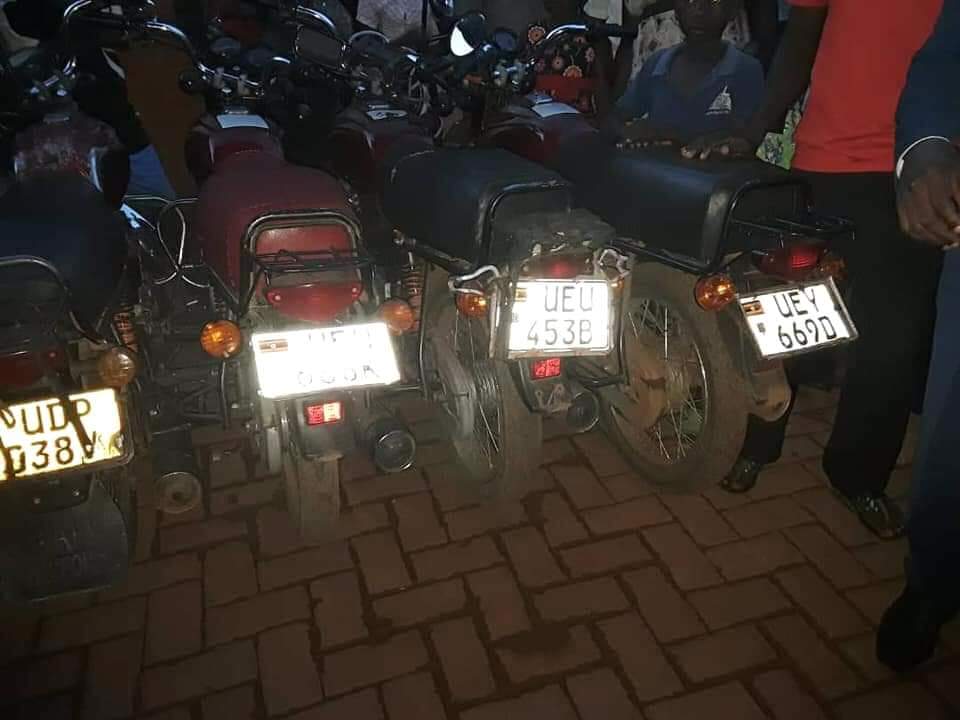 Some of Motorcycles at Police

According to Police, motorcycles were recovered in areas of Kamwokya , Kyebando and Mulimira. Three among the seven recovered motorcycles had been recently stolen from a night parking in Kulambiro.

Investigations are still ongoing to ascertain the owners of the other four motorcycles and spare parts.

DR Congo as a destination for stolen boda bodas was mentioned by multiple other sources we interviewed, including policemen and boda boda riders.
A number of sources within the police talked about what they called a growing black market for motorcycles in DR Congo and South Sudan.

Intelligence sources say the robbers often target boda boda riders at places like sports betting spots. They study them for days, freely socialising with their intended victims as they place bets together. After creating rapports with them, the killers then ask the boda boda men to drop them at their homes and pounce on the riders along the way.

A Ugandan mechanic operating in South Sudan told this website that the racket involved in selling stolen motorcycles in South Sudan and DR Congo operates between Arua and Kampala.

He mentioned Arua Park in Kampala is their main transit route where stolen motorcycles are parked in big boxes after being dismantled into small parts and labelled as cargo destined for South Sudan.

At the Uganda- South Sudan border, the source said the racket has wide connections within the South Sudanese government, where some cargo can enter the country unchecked, especially for top officials. Sometimes, money exchanges hands to keep lips tight.

The source further said it is mainly the Bajaj model which has ready market in South Sudan, with a secondhand motorcycle sold for 150,000 and 200,000 South Sudanese pounds, an equivalent of about between Shs4m and 5m respectively. A new Bajaj costs 250,000 pounds (about Shs7m).

The source also said sometimes if a motorcycle has not been dismantled, it is hidden under heavy luggage in trucks heading to DR Congo. In Congo, the motorcycles end up at a place called Ariwara, where they are sold.

According to a boda boda cyclist, who operates on Entebbe road, some of the motorcycles stolen in the outskirts of Kampala are dismantled from Katwe, a city suburb, and sold as spare parts.

He said sometimes the motorcycles are sold for as cheap as Shs500,000 to spare part dealers in Katwe.

Kampala Metropolitan South police records indicate that they have arrested at least five notorious suspects, who were actively involved in the numerous killing of boda boda riders and subsequent robberies of their motorcycles.

Police said the gang leader deploys his members at specific locations, where they jointly attack and kill their victims. On other occasions, the assailants hire a boda boda rider, whom they attack and kill. Their victims are randomly selected.

The modus operandi of motorcycle robbery rackets sometimes involves businessmen, notorious robbers and middle men. Young energetic men with notorious criminal records are paid to do the dirty job of waylaying and killing the motorcyclists.

After getting their loot, they hand the bike over to the middle man, who then sells it either within the country or other countries.

Police further explained that the thugs use a combination of techniques, including the “honey pot” trick, which involves using women.

The women suddenly appear in the road looking desperate to attract sympathy from their targeted victim, before leading them to the killers.

Others use handkerchiefs laced with chloroform, which they squeeze around a boda boda rider’s nose before he blacks out.
“Motorcycles stolen from within Kampala are sold upcountry and outside and those stolen upcountry are sold within Kampala,” a security operative said.

The boda boda industry, especially within Kampala, lacks a common association. At least every small boda boda stage at any junction within Kampala and surrounding areas form small leadership groups.

A police officer said since Boda Boda 2010 patron Abudala Kitatta was arrested and charged before being sent to prison, most people in the business have remained paranoid to any idea of forming a bigger association.

Motorcycle theft. According to the 2018 police crime report, at least 13 motorcycles are stolen in Kampala and surrounding areas every day, and 95 per cent of them are never recovered. The report indicates that at least 5,000 motorcycles were stolen in 2018. It is not clear how many boda boda riders were killed in the process of robbing them of their motorcycles.