Trending
HomeNewsBobi Wine Meetings Blocked: He Is Disrespectful, Must Comply With The Law – Police

Uganda Police have said Kyadondo East Member of Parliament, Robert Kyagulanyi also known as Bobi Wine has not fulfilled all conditions to allow him consult voters about his presidential aspirations thus, ready to continue blocking his scheduled Consultation meetings until there is assurance that he and his team will respect the law.

The declaration from police came hours after Kyagulanyi’s consultation meeting scheduled to take place today at Pope Paul Memorial Hall, in Ndeeba, Rubaga Division in Kampala, flopped after police deployed heavily and blocked the entrance to the venue.

The Deputy Metropolitan Police Spokesperson Ms Polly Namaye said, police is still waiting for an assurance from Bobi Wine, that there is an effort to respect law and order. Namaye said, Kyagulanyi was expected to meet with police and Electoral Commission and harmonize their positions on consultations before the meeting is held, which has not been done. 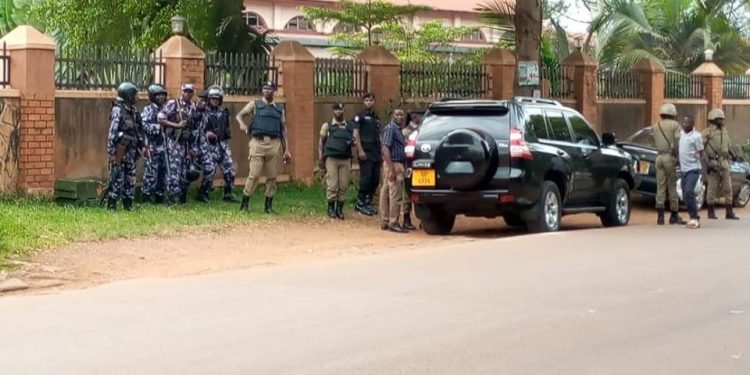 She also reffered to a letter, police wrote to Bobi Wine to put in place modalities, and harmonize the proposals he (Bobi) advanced during a stakeholder meeting with the Electoral Commission in Jnuary 2020, to streamline the conduct of the consultations for proper security planning and adherance to the law.

Police said, a consensus must be reached between police and Bobi Wine before the consultation meetings are held.

As part of the requirements, Kyagulanyi’s consultations must follow regulatory guidelines as prescribed in the Public Order and Management Act, 2013. He is also required to submit a plan of the consultations, and ensure that the venue, the number of people attending, the ushers, the parking space and other facilities are included in that plan. 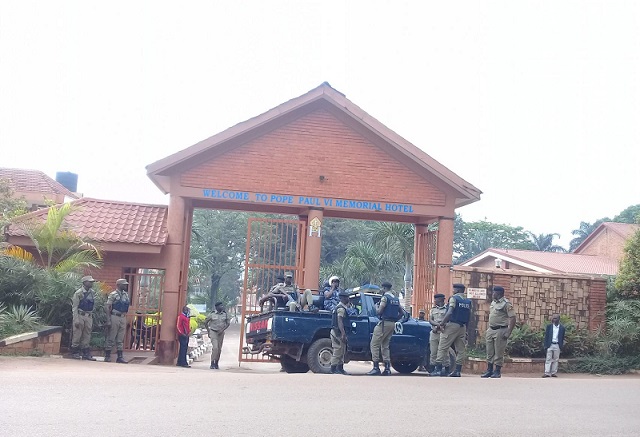 Security tightened at the gate

However, in a letter to the EC and copied to the IGP written on 21st February 2020, Kyagulanyi requested for a meeting between 24th February 2020 and 28th February 2020, expressing concern that police had ignored his request to convene the said meeting to harmonize positions on the matter, and determined to block his scheduled meetings.

On 14th February 2020, Kyagulanyi wrote to the IGP notifying him of the intention to hold a consultative meeting in Kampala, but police formally advised him that there is urgent need to harmonize his proposals with Uganda police and EC before the meeting is held.

In the 21st February letter to the EC on the said proposals, Kyagulanyi however states that some of the requirements by police ahead of consultations like firefighting equipment, sniffer dogs, ambulances and access-control machines, were unreasonable and had no basis in the law.

He also said, police should take on the role of securing the participants in the meetings, instead of relegating the role to the organizers since some of the requirements are not accessible to them.

On January 6, police arrested Bobi Wine as he attempted to hold his first consultative meeting in Kasangati that was deemed unlawful for not fulfilling all the required conditions under the Public Order Management Act.

Following that meeting that was never allowed to happen, Bobi Wine said he would start having regular meetings with the law enforcement body but it seems the collision between the two is far from over.

Since declaring his intentions to vie for the highest office in the land, the Kyadondo East legislator has not read from the same page with security agencies that have not only banned his music concerts but also not allowed his consultations to continue.

Section 3 of the Presidential Elections Act 2005 (1), (2) and (3) states: “An aspirant may consult in preparation for his or her nomination as a presidential candidate within 12 months before nomination date.”

It also stipulates, “While consulting, a presidential aspirant may carry out nationwide consultations, prepare his or her manifesto and other campaign materials, raise funds for his or her campaign through lawful means and convene meetings of national delegates.”

“While consulting, the aspirant shall introduce himself or herself to the commission and notify the relevant local council and the police of the area to which he or she goes,” the law adds.

Section 3 of the Presidential Elections Act provides that anyone who aspires to become president can write to the EC and thereafter go around the country consulting citizens about his/her intentions. So in light of this, I am going to interact with Ugandans about his intentions to run for President.

The police still awaits the assurance that there shall be an effort to respect law and order by abiding with agreed upon strategies in order to embark on the team’s consultative meeting schedule.