Four Top Ugandan government officials have clashed over Billions of shillings in the ongoing ‘Fight Against Locusts Bonanza’.

According to an insider, three top officials are in a silent wrangle with the Minister for animal industry Bright Rwamirama alleging that he swindled Billions while securing an aircraft to fight locusts in North Eastern Ugandan.

Uganda response team on desert locusts  received an aircraft from the Desert Locust Control Organisation of East Africa (DLCO-EA) to help fight swarms of locusts that have invaded the country.

The aircraft landed in Moroto airstrip on Friday evening after undergoing servicing in Nairobi the day before, according to officials on the team.

Earlier this month, minister Ecweru and Lt Col Bright Rwamirama, the State Minister for Animal Industry, along with technocrats from DLCO-EA, travelled to Kenya for negotiations with the authorities to release the aircraft they used to spray the locusts in the east. 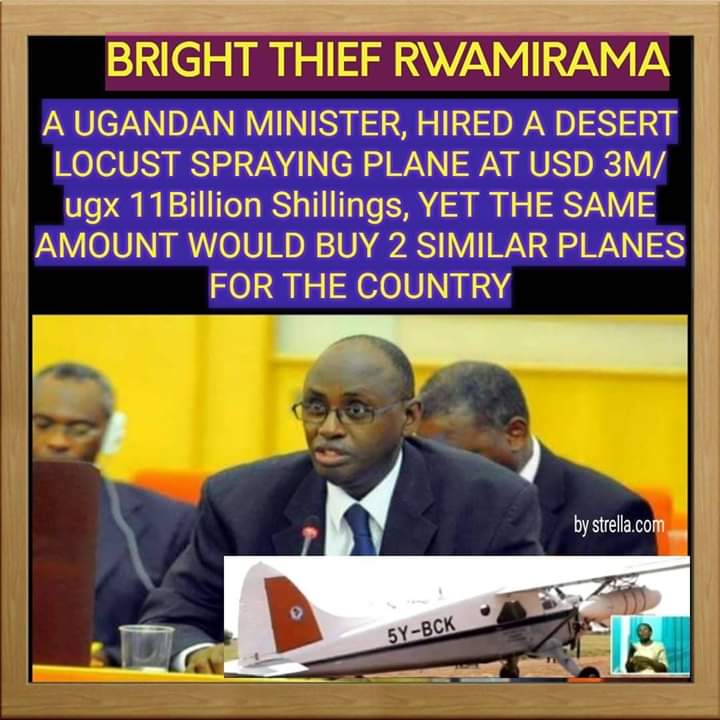 The aircraft, according to Mr Rwamirama, was cleared on Monday by the Civil Aviation Authority for air operations.

On Tuesday, Lt Col Rwamirama said chemicals for aerial spray would arrive in the country by Friday but they hadn’t three days later.

In relation, the the United Nations (UN) through its World Food Programme (WFP) on Wednesday February 26, 2020 offered five food trucks to the government of Uganda to help transport equipment to districts invaded by locusts.

While handing over the trucks at the UN World Food Programme offices at Kabusu, Kampala on Wednesday, the UN head, supply chain unit, Oleh Maslyukov said the trucks have been offered after a request by the government of Uganda through its Ministry of Agriculture, Animal Industry and fisheries.

Mr Maslyukov said they had to respond immediately because Uganda is a major food basket for the region and that they could not afford as locusts cause destruction in the affected districts.
“The trucks will be operating initially from Soroti and Karamoja districts to other areas. There is an interest from WFP in fighting locusts because we are buying a lot from the Ugandan market. It is really in the interest of WFP to get more crops on the local market that will be available for in-country programs and for the region as well,” Mr Maslyukov said.

The Bill & Melinda Gates Foundation donated $10 million to the United Nations Food and Agriculture Organization (FAO) to help in the fight against locusts in the East African region.
The foundation joined several other donors in responding to FAO’s urgent appeal to contain the crisis.

The money will help three countries among them; Ethiopia, Kenya, and Somalia.

The locust invasion is the worst Kenya has seen in 70 years, and the worst in nearly a generation in Somalia and Ethiopia.
Djibouti and Eritrea are also affected, and swarms are reported in Tanzania and Uganda.

The foundation’s support is intended to help FAO and national governments confront the critical need for rapid control of the infestation, including aerial control of large swarms.