Traders and residents of Wantoni trading Centre in Mukono town were engulfed with Shock on Friday August 7, 2020 after men said to be working with Power Distributor Umeme Limited got electrocuted to death on top of an electric pole.

Eye witnesses revealed that the deceased, identified as Moses Kasiita and Jacob Mutalaga had climbed an electric pole to repair power lines in the trading centre.

However, while attempting to fix the power line, the duo ended up being electrocuted to death and their bodies entangled im electric cables.

One of the eyewitnesses, Faizal Kigenyi said the workers had switched off the power supply before they started working on the faulty transformerand it is unclear how supply was reconnected at a time when the workers were still fixing the cables. They both died instantly.

“It is difficult to tell who reconnected the power before they finished working. We just saw them hanging on wires,” One of the eyewitness said.

Samuel Ntwatwa, another eyewitness said that power supply was suddenly restored when the two men were still on the poles reconnecting wires joining to the transformer. Moments later, it was disconnected again although it was late to save their lives.

According to Patrick Onyango, the Kampala Metropolitan police spokesperson, the incident happened at around 11:45am and started Investigations. Police visited the scene but only found one body in a Umeme van registration number UAZ 704Q. The other victim had been rushed to Mukono International Hospital with the hope that his life could be saved. But the hospital management said that he was already dead.

Onyango added that the deceased are Moses Kasita, a stores assistant at UMEME Uganda, and Jacob Mutalaga, 28, also a UMEME official.

Onyango added that Police preliminary findings indicate that the deceased were putting on UMEME attires before the incident but were undressed immediately after the electrocution and they are investigating why they were immediately undressed.
Uniforms for the deceased persons recovered from the UMEME truck number UAA 286E. One of uniform had the name KASITA MOSES.
There was no physical injuries observed on the bodies. They were taken to Mulago City mortuary for postmortem as investigation continues.

Meanwhile Umeme has since released a contradictory statement claiming that the deceased were Umeme non-staff which reads thus..

Today August 7., 2020 at about I lam, two individuals were electrocuted while executing worlcs on a distribution transformer in Mukono.

Investigations into the matter by the Police and internal teams have commenced, Details will be shared when a full report of the incident is completed.

Our sincere condolences to the families of the deceased. 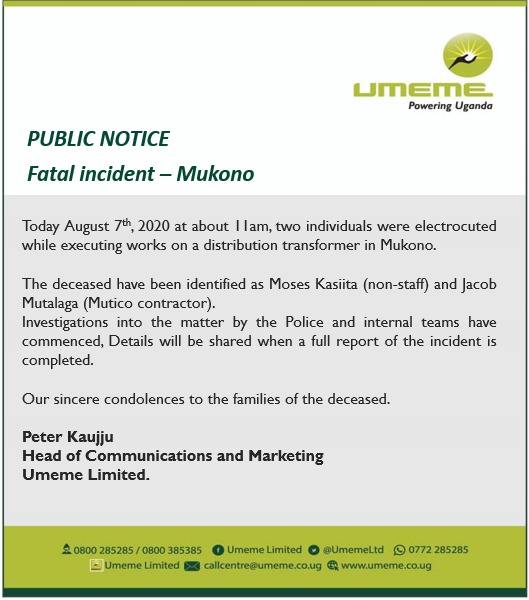