Fifteen people are dead and more than 20 are being treated in hospital following a deadly attack by militants at a seaside hotel in Somalia.

Militant group al Shabaab has claimed responsibility for the attack on the Elite Hotel in Lido beach, in the capital Mogadishu on Sunday.

The attack started with a suicide car bombing, followed by gunmen storming the building and taking hostages.

The hotel is owned by Abdullahi Mohamed Nor, a politician and ex-finance minister.

It is frequented by many government officials, government workers and people from the Somali Jewish community.

A statement broadcast on Radio Andalus, run by al Shabaab, said there were government officials inside the hotel at the time of the attack. 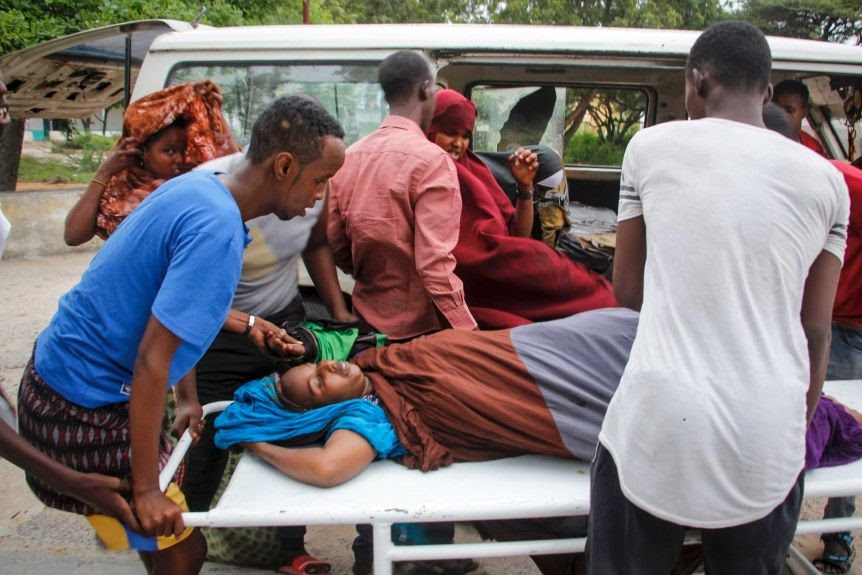 Medical workers and other Somalis help a woman who was injured when a car bomb blew off the security gates to the Elite Hotel in Mogadishu.(AP: Farah Abdi Warsameh

A witness, Ahmed Ali, said he had heard “a huge blast at the hotel, gunfire followed, and then clouds of smoke”.

The death toll rose to 15 following the siege between security forces and militants.

Head of the Aamin ambulance service, Abdikadir Abdirahman, said 28 injured people had been taken from the scene before the gunfire started.

Mr Nor posted on his Facebook page after escaping the building.

“May Allah have mercy on all those who died in the attack by the terrorists on civilians particularly on Elite Hotel in which I was in,” he wrote.

Government worker Mohamed Nur said there were stray bullets exiting the hotel during the standoff between security forces and militants.

“The exchange of gunfire is terrible and stray bullets reached us near the beach,” he said.

Somalia has been embroiled in deadly violence since 1991 when clan warlords overthrew leader Siad Barre and then turned on each other.