The Supreme Court has dismissed with heavy Costs Bank of Uganda’s (BoU) case in which Crane Bank Limited (CBL) (in receivership) filed an application against Sudhir and URSB seeking for an interim order preventing the businessman from claiming, taking control, repossessing or in any way interfering with the management of CLB or of its receiver until the hearing and determination of Supreme Court Civil Application No.32 of 2020.

BoU was also seeking for an interim order preventing URSB from registering any resolutions in respect of the applicant/CBL until the hearing and determination of Supreme Court Application NO. 32 of 2020.

BoU sought an injunction against what they perceived as efforts by URSB to permit Sudhir repossess CBL as a company. But in the presence of URSB’s lawyer Allan Kakungulu, Dr. Joseph Byamugisha (for BoU) and Ellison Karuhanga & Bruce Musinguzi (for Sudhir), Supreme Court’s Justice Paul Mugamba on Monday 9th November dismissed the application with costs against BoU. 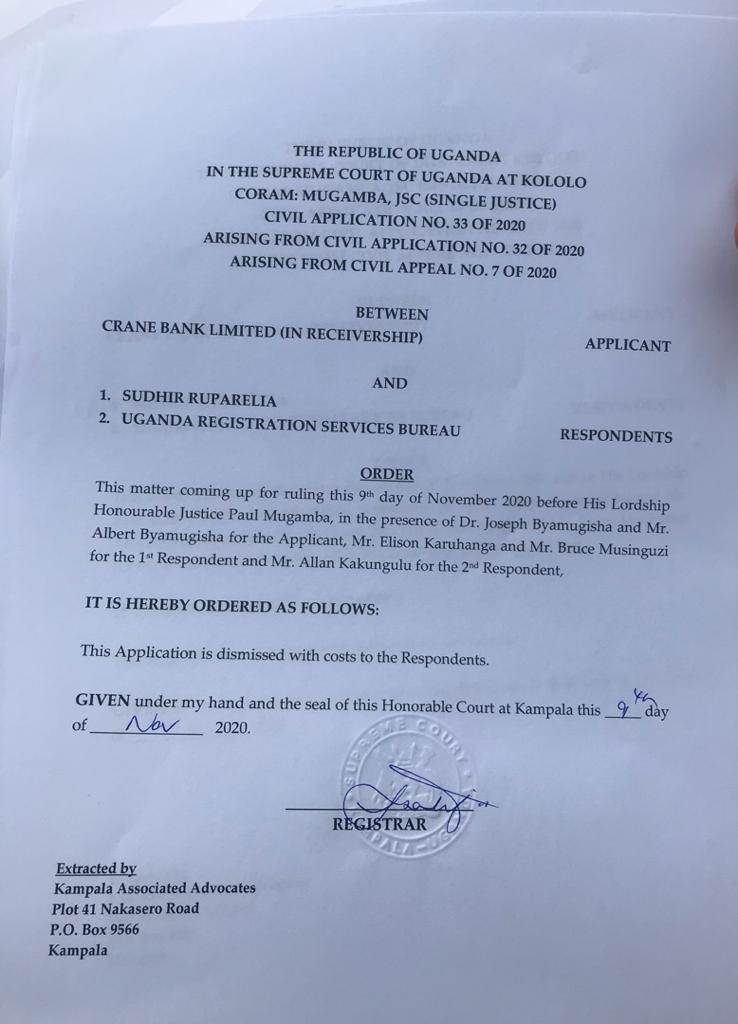 Sudhir Floors Bank of Uganda for the third time

In his letter to URSB, Sudhir referred to the prior finding and proclamation by High Court and Court of Appeal to the effect that the receivership period (giving BoU authority over CBL) had ended in January 2018 (having commenced on 18th January 2017).

According to the law, once the receivership period ends, whatever remains of the company reverts to the Directors and Shareholders.

In his writing, Sudhir appropriately sought to bring these two court decisions to the attention of URSB but the same alarmed BoU whose top officials construed this to be an attempt to have repossession and resume running a company called Crane Bank Ltd.

The bank’s lawyers rushed to Supreme Court and filed an application seeking an injunction against these perceived Sudhir moves but the application was dismissed with costs to Sudhir and URSB.

From then, Crane Bank was conducting banking services but under the management and control of BoU.

It was then that BoU and Crane Bank in Receivership sued Sudhir over the frivolous charges of siphoning money from his own bank, which BoU had reportedly injected in Crane Bank as recapitalization facility.

As a way of squeezing the Shs397Bn from Sudhir, BoU officials wanted to attach the 48 properties then housing the defunct Crane bank branches and sell them to dfcu Bank. The land on which the properties are registered under freehold land tenure system.

Bank of Uganda had also contended that Sudhir and Meera Investments beneficially owned and controlled 100% of the shares, which contravenes section 24 of the Financial Institutions Act.

Bank of Uganda Lawyers led by Albert Byamugisha argued that Sudhir was the beneficial owner of the 47.33 of the shares registered in the name of White Sapphire Limited, a Company nominally owned by Rasikal Chhotalal Kantaria.

It also argued that a further 4% share that Sudhir issued Jitenderia Sanghai also belonged to him and that Sudhir or the Ruparelia Group was the beneficial owner of the shares transferred to Rasikal Chhotalal Kantaria and Jitendra.

Matters Of Contention In Suit

One of the issues under contention was whether Sudhir owned 100% of the Shares in Crane Bank. The Commercial Court was also to determine whether the Company placed under receivership could be sued.

Bank of Uganda had sought an order to have the Ruparelia Group surrender 48 freehold certificates of title comprising the defunct Crane Bank branches across the country.

However, Sudhir’s lawyers led by Peter Kabatsi, of Kampala Associated Advocates (KAA), during the hearing asked court to strike out the suit, arguing that the BoU and Crane Bank in Receivership had no locus or capacity to sue their client.

They cited sections of the Financial Institutions Act 2004 and argued that Crane Bank lost the power to sue and be sued from 20th of January 2017 when it was placed under receivership.

Bank of Uganda lawyers however insisted that liquidation does not take away its corporate personality and that receivership is a management situation since there was no legal change as capacity of a Company to sue or be sued.

After hearing both sides, Court found that Bank of Uganda had in September 2013 approved Rasiki Kantarai, one of Crane Bank’s shareholders, to transfer her 47.33% shareholding to a Mauritian incorporated company White Sapphire. The other shareholder was another alien Jitendra Sanghani with 4% shareholding.

Commercial Court Judge, David Wangutusi, in a ruling delivered in August 2019, dismissed the application and directed bank of Uganda to pay costs to Sudhir.

Justice Wangutusi argued that Sudhir or Ruparelia Group was not the major shareholder in Crane Bank.

“It is clear from the evidence on record that the majority of the shares were owned by White Sapphire, a company incorporated in Mauritius. That it owned the majority share was a matter well known by the Central Bank because 47.33% of the shareholding was transferred to White Sapphire with the approval of Bank of Uganda” said Justice Wangutusi.

He added that the constitution and the Land Act bar noncitizens from acquiring or holding freehold land titles.

“Having found that the respondent is a noncitizen for the purposes of the Land Act and the constitution, an attempt to confer freehold title upon it would be an illegality because the holding of the shares by noncitizens prevented them from owning land under the tenure that the respondent’s/plaintiff’s prayer in the plaint seeks,” said the Judge.

About whether Crane Bank in Receivership could sue or be sued, Justice Wangutusi ruled that section 96 of the Financial Institutions Act insulated Crane Bank under receivership from Court proceedings, execution or other legal processes.

However, despite Justice Wangutusi’s ruling, Bank of Uganda (Crane Bank in Receivership) appealed, arguing among others that the Judge erred in law by stating that since Crane Bank was being controlled by non-Ugandan citizens, they were not supposed to hold free hold titles.

Little did BoU know that on June 23, 2020, a Panel of Court of Appeal Justices led by the Deputy Chief Justice Alfonse Owiny Dollo and Cheborion Barishaki would uphold Justice Wangutusi’s ruling and dismiss the appeal with costs to Sudhir and the Ruparelia Group of Companies.

In dismissing the appeal, the Court of Appeal held that the trial judge was satisfied that the preliminary points of law which the respondents raised were based on the presumption that the facts in the plaint were true and that the points of law, if upheld, were sufficient to conclude the case.

Court of Appeal Justices, Alphonse Owiny Dollo; Cheborion Barishaki and Stephen Musota agreed with an earlier ruling by Commercial Court Judge Justice David K. Wangutusi’s August 26th 2019 that a bank in receivership (Crane Bank Limited in this case), under the Financial Institutions Act (2004) cannot sue or be sued and therefore Crane Bank (in receivership) cannot and should not have sued businessman Sudhir Ruparelia and his company Meera Investments.

While delivering their ruling , Civil Appeal 252 of 2019 at the Court of Appeal, the trio also ruled that Crane Bank (in receivership) being a foreign owned bank, cannot own freehold land in Uganda and therefore has no legal basis to sue Sudhir for land it cannot own.

“The appeal consequently fails. It is thus dismissed with costs here and the court below,” ruled the justices. The costs would be borne by Bank of Uganda.

This is the third time, Bank of Uganda’s case- HCCS 493 of 2017, in which BoU, through Crane Bank (in receivership) alleged that the businessman fraudulently siphoned around $92.8million (about Shs334billion) and another Shs8.2billion of depositors’ money from Crane Bank for personal gain, has failed.

Sudhir’s victory is a major blow to Bank of Uganda’s attempt to recover the alleged cash (Shs397billion) it claimed he syphoned from his CBL before the central bank took it over on October 20, 2016 and sold it to dfcu bank for a paltry Shs200bn.