Gen Kainerugaba who also retains his role as the Senior Presidential Advisor for Special Operations was redeployed in the recent changes announced by President Yoweri Museveni who is also the Commander-in-Chief (CiC) of the Ugandan armed forces.

In his acceptance speech, Gen Kainerugaba thanked the president for entrusting him with another opportunity to lead the SFC which he said he has been close to for about 35 years. 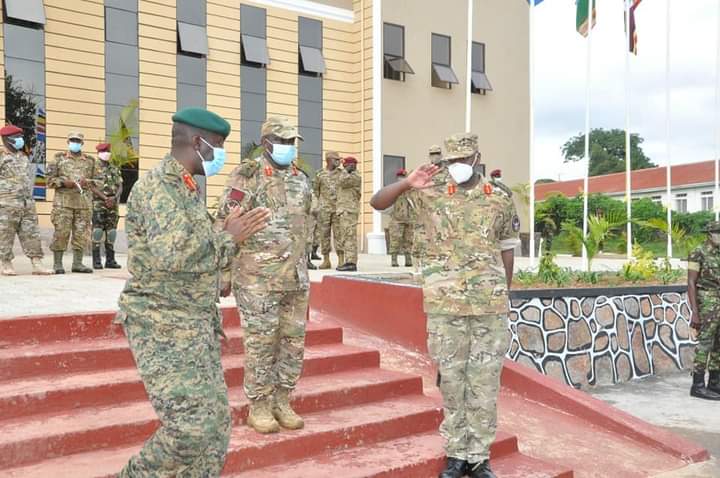 He noted that Maj Gen Birungi executed his tasks with distinction, urging him to keep it up in all his future assignments.

Gen Kainerugaba told the senior UPDF officers present that the SFC has grown and continues to achieve great things with distinction.

“I want to tell you all officers today that we are going to continue achieving great things. We are not going to let down our great predecessors and the great name of SFC,” Gen Kainerugaba said emphatically.

Gen Kainerugaba used the function to assure the CDF that during this “electioneering season, the SFC will play its full role in providing security for our people. We have done it in the past and we are going to do it again.”

Commenting about the Covid-19 situation in the country, Gen Kainerugaba said that “it is not the first time we are dealing with diseases, it won’t stop us from doing our work. The security forces working together will perform their historical responsibility and ensure our citizens vote peacefully and go about their day to day lives without any disturbances.”

Speaking at the HOTO, the Chief of Defense Forces congratulated Gen Kainerugaba for catching the eye of the president who reappointed him.

Gen David Muhoozi commended the new SFC commander for establishing a strong foundation for the elite force, saying that Gen Kainerugaba midwifed the SFC, left it to do other things and the formation continued to grow.

“The test of his investment in this is that he left and it stood on its own. That is the test of the durability of an idea. He started it, he grew it and then other people took it up and here we are—it’s one of the exemplar of how well public institutions should be managed,” the CDF noted.

During his initial seven-year tour of duty as the SFC commander, Gen Kainerugaba was hailed for championing a number of training initiatives aimed at equipping soldiers with skills as well as establishing infrastructural projects for the welfare of his soldiers among others.

One of the projects started by Gen Kainerugaba is the new headquarters of the Special Forces Command.

During its commissioning recently, the president commended the SFC leadership for frugal spending. The new magnificent building is named “General Yoweri Museveni House.”

Lt Gen Kainerugaba replaces Maj Gen James Birungi who has been SFC commander since June 2019 when he was appointed to replace Maj Gen Don Nabasa. Maj Gen Nabasa had, in 2017, taken over from Lt Gen Kainerugaba.

As the CiC, the President has the power to appoint or designate any military officer to any command positions any time without giving reasons for the choices.

Meanwhile, Maj Gen Birungi who has been the SFC Commander is heading to Juba to replace Maj Gen Lokech where a UPDF team is, on behalf of the guarantors of the South Sudan peace signed in February, working with Sudan forces to monitor the parties’ compliance with the pact.