Lt. Col. Nyakaisiki Carol Basalisa, who is involved in a bitter property wrangle with her relatives, has landed in hot soup after it emerged that she is using her positon as a Uganda Peoples Defence Forces (UPDF) officer to intimate and take advantage of the people she is supposed to help.

Controversy arose about how Lt. Col. Basaliza does her things after it emerged that she is using UPDF headed papers and other official documents which she purports to be part of her personal address, in a bid to settle family matters regarding the estate of her late brother Maj. Francis Kasaija RO/7930, who died on November 2nd, 2018.

It should be noted that following Maj. Kasaija’s death, his sister Carol acquired Letters of Administration for his estate on January 11th, 2019, just a month after his death, something that has since become a source of controversy about how she acquired the Letters and how she is managing her late brother’s estate.

That put aside, investigators and concerned army officers are wondering how and from where Lt. Col. Basaliza got the authority to use official UPDF documents when it comes to handling matters concerning her family affairs.

A case in point is a letter she wrote on April 12, 2020, to the Chief Magistrate’s Court in Fort Portal, Kabarole District, as an additional report of the account and distribution of Maj. Kasaija’s estate.

According to the letter seen by this website, Lt. Col. Basaliza, who is the Director of Protocol at the Military Headquarters in Mbuya, wrote to Chief Magistrate, informing court that her late brother, who was the UPDF Zonal Pensions Officer and was based in Jinja District, died in an accident that occurred in Bwaise Kampala and left behind six children.

She avers in her letter that although the five are known to her and the rest of her family members, the sixth child, who is a girl, is barely known to the family, although she admits that according to records in her possession, the deceased indicated her as one of his children. 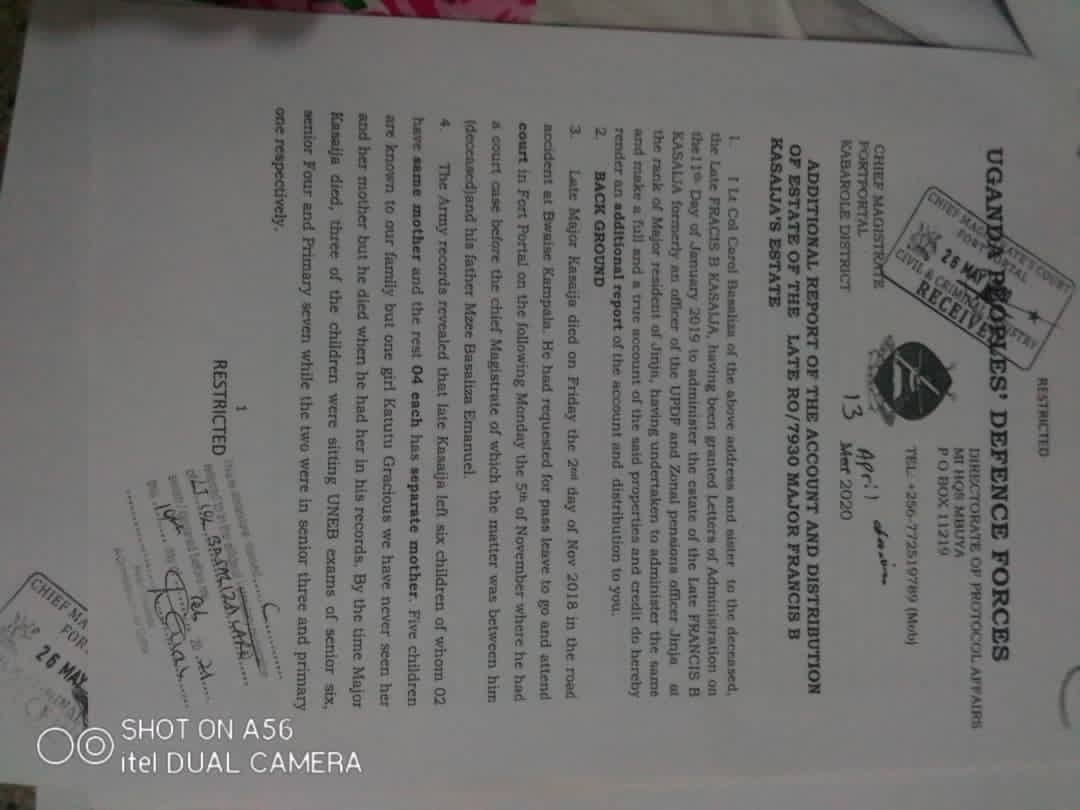 The letter in question..

What raises eyebrows however is why Basaliza had to use a UPDF headed paper while addressing matters that are purely personal and on a family level, yet such documents are under normal circumstances used during official government communication or when disseminating classified military information.

By presstime, our efforts to reach either Col. Carol or the UPDF spokesperson Brig. Gen. Flavia Byekwaso to inquire whether this is standard procedure were however futile, because none of them could be reached through their known telephone contacts.

We recently revealed how Basaliza is involved in a bitter property wrangle with her relatives, whereby she is being accused by Kasaija’s widow (her sister-in-law) and father of allegedly mismanaging her late brother’s property for personal benefits, while the widows and orphans languish in abject poverty.

We shall keep you posted…