The Church of Uganda has condemned the beating of it’s priests by minister Musa Ecweru.

It is alleged that minister Ecweru roughed up three Anglican priests last Saturday over a land dispute, leaving them injured.

The wrangle pits St John’s Church of Uganda Wera and the neighbouring Wera Seed Secondary School, both in Amuria District.

The minister claims the church encroached on the school land he lobbied for.

Witnesses told Daily Monitor the minister parked at Wera Seed Secondary School and dashed to a nearby garden where he found the priests and other Christians planting cassava stems.

Rev Olato told Daily Monitor that the minister, accompanied by a bodyguard, on arrival called them “idiots” and questioned who gave them authority to open a garden on school land.

“As we looked on in awe, [the minister]pulled a gun and grabbed a metallic rod from the hands of his bodyguard [and]began to sporadically beat us,” he said.

Rev Olato said when he inquired why the minister had pounced on them, the attacker instead reached out to the car for more canes which they used to beat them indiscriminately for about 10 minutes.

“I told the minister that I am the Reverend for St Johns Church Wera planting cassava stems under the food security programme which the diocese is implementing, but the minister didn’t heed. The minister caught me by the head, dragged me to the ground, hit me several times at the waist,” he said.

Rev Otasuro of Aten Church of Uganda said the minister hit him on his head.

The assaulted clergy said the minister cocked a gun on children taking confirmation lessons at St John’s Church Wera, who rushed to the scene when they heard the priests’ alarm.

“It is then that he told his bodyguard: Let’s go, leave these idiots,” he said.

Rev Otasuro said they reported the matter to Wera Police Post, but the officer in-charge denied them medical forms for unknown reasons 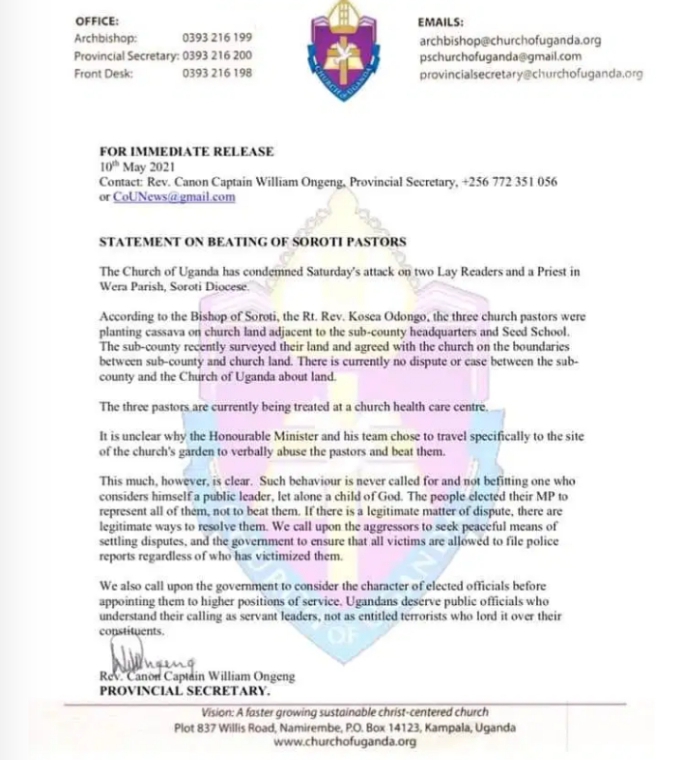