The High Court (Commercial Division department) has dismissed an application by (now ex) administrators of Simbamanyo Estates Limited in which they wanted the auctioning of its prime properties in Kampala which was meant for Equity Bank Ltd to recover outstanding loans worth $10.8 million (Shs40 billion) to be halted.

The building had been mortgaged by its owners with Equity Bank but after failing to pay, the exercise was conducted through public bidding on October 8 by Equity Bank Limited.

Commercial Court Deputy Registrar Lillian Bucyana ruled on Wednesday February 17 dismissing the matter. She said the suit abates for failure to take out summons for directions in time.

“The application for withdrawal was not conceded to unconditionally but was on condition of payment of costs. In the circumstances therefore, the applicant (Simbamanyo Estates) application stands dismissed upon withdrawal and the only issue for consideration is whether should be payable,” Justice Madrama stated in his ruling.

He further added “The respondent upon being served, instructed lawyers and the lawyers took action to oppose the application by filing the appropriate affidavits in reply as well as written submissions”. 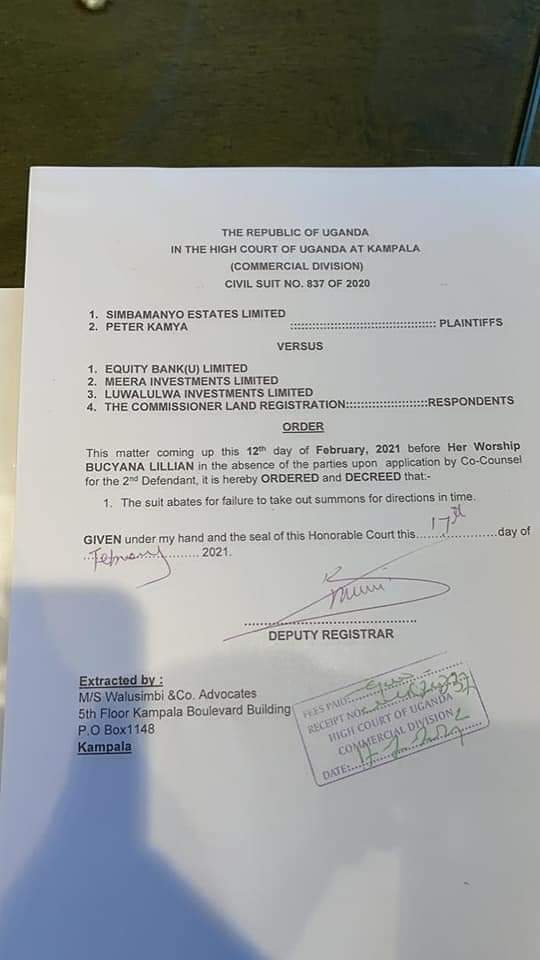 According to court documents filed in the Commercial Division of the High Court, on August 20, 2012, Equity Bank Kenya and Equity Bank Uganda entered into a loan agreement in which the two banks agreed to advance Simbamanyo with $6m.

The loans, which would make up a consolidate sum of $8.10m (Shs29.83b) including interest and operational fees, among others, sought to finance the construction of Afrique Suites Hotel in Mutungo, Luzira north east of Kampala and facilitate the takeover of a prior facility advanced to Simbamanyo by Shelter Afrique.

The two banks, details indicate, pooled money together with at least $3.5m drawn from Equity Bank Kenya and $2.5m from Equity Bank Uganda. However, Simbamanyo Estates challenged the outstanding sum, saying it is only aware of $7.19m (Shs26.48b).

In its defense, Equity indicates that Sambamanyo benefited and was aware of every financial transaction that was advanced to it. Equity also argued that Bank One, based in Mauritius, was drafted into the transaction on the request of Simbamanyo, which had sought to obtain bridge financing of up to $10m.

In the same spirit, Simbamanyo Estates Limited withdrew their application in which they were seeking to stop the takeover of its property on Lumumba Avenue. They had petitioned the Court of Appeal seeking orders to maintain the status quo stopping the sale of their property by Equity Bank which is seeking to recover loans worth $10.8 million (Shs40 billion).

Court documents indicate that upon issuance of the High Court order on September 7 last year, the bank advertised their property, and were meant to and finally sold on October 8.

Previous ArticleCasualties Feared Dead Near Somalia’s Presidential Palace As Gun Battle Erupts
Next Article Justice Owiny-Dollo to Bobi Wine: If Anybody Thinks He Can Induce The Chief Justice With Favours or Intimidation, Be Ready For a Crash