The company say its services will stop on October 7, this year, according to a letter circulated to its employees, who will continue to be in employment until November 30.

Africell Uganda says its vision was to be a leader in mobile services and giving an impact in the digital transformation of the society.

The statement by management says that the stiff competition has made it difficult to achieve its business objectives, hence the decision to quit.

“In Uganda – a country with a mature and competitive telecom sector – we believe that the opportunity to achieve this impact is increasingly limited. We have therefore taken the difficult decision to permanently end Africell Ug’s operations in Uganda,” the statement says.

The Lebanon-based Africell Holdings, entered the Ugandan market in 2014 by acquiring Orange Uganda, and has been mostly known for its affordable internet service packages, and relative network stability.

The Minister for Finance, Planning and Economic Development Matia Kasaija says it is sad that foreign companies are exiting the Ugandan market at this time, saying distressed companies should instead approach the government for advice or help before taking such a decision.

He says companies which quit in times of economic hardships lose their credibility as far as being a partner in economic development is concerned.

Kasaija says Uganda is not the only economy affected by hard operating environment.

Part of the debt has been inherited from Orange, when it purchased it.

In the same year, Ziad Daoud was named Chief Executive in efforts to stabilize the company. He resigned in March 2021 to be replaced by Houssam Jaber.

The letter to the staff says that starting now, they will no longer accept new customers, while the remaining period will help the existing ones migrate to other networks.

Earlier in August, Smart Telecom also announced it was leaving the country after failing to realize their business objectives.

The management noted that their decision to quit will have a long-term impact on the telecommunication sector in Uganda, but an immediate impact on the employees.

The employees have been offered a severance pay, payment for unused annual leave, repatriation pay for those eligible to it, as well as full salary and benefits during the rest of the employment period.

The company says its decision is aimed at enabling it to focus on other opportunities “for social and commercial impact”. 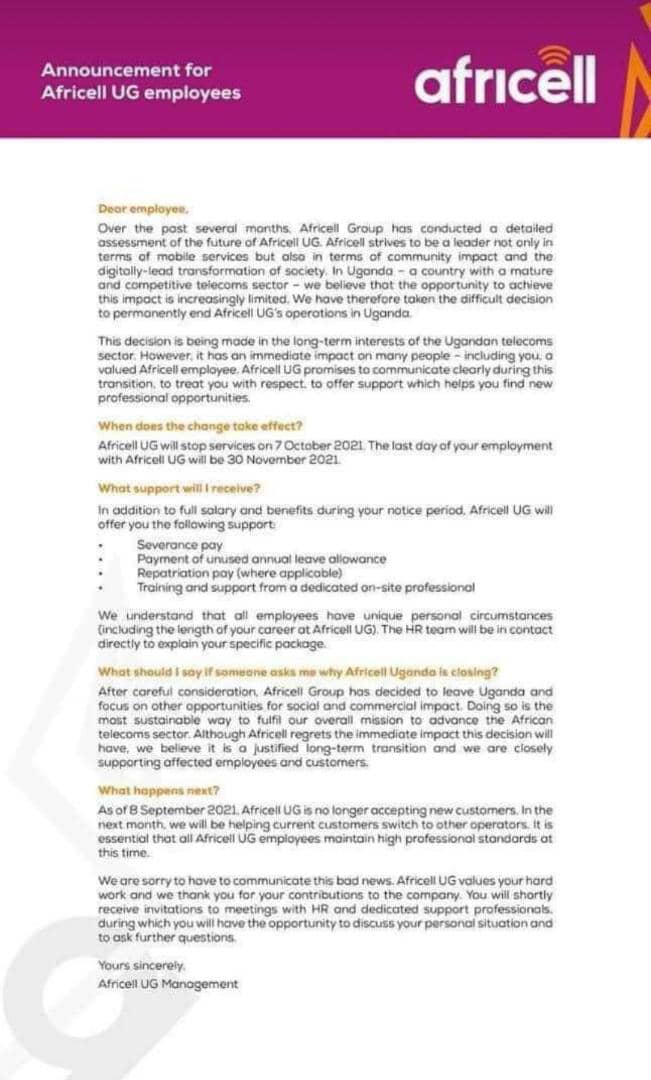 Previous ArticleJust In! Opposition MPs Ssegirinya, Ssewanyana Remanded to Kitalya Prison Over Masaka Gruesome Killings
Next Article Vaccination Made Easy! Uganda Receives 647,080 Doses of Moderna Vaccine From the US Government